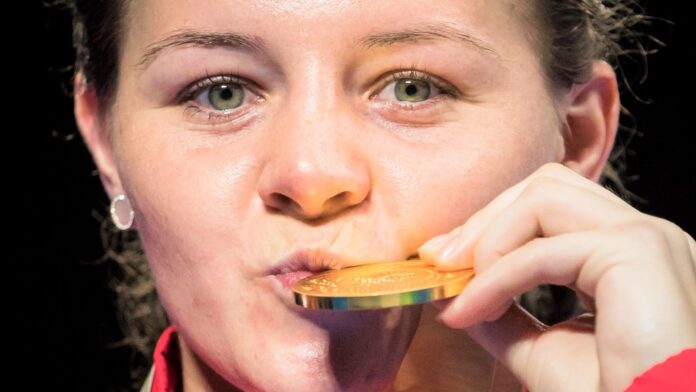 Sandy Ryan: “I want to win a world title at two or three weights, and I believe I can do it as well.” Team GB’s exciting amateur talent aims to become a dominant champion when she turns pro this summer

World Championship silver medallist Sandy Ryan is set to turn professional this summer with exciting ambitions of becoming a multi-weight champion for Britain.

The 27-year-old Derby boxer, who also claimed gold at the 2018 Commonwealth Games, had been one of Team GB’s leading medal contenders for the rescheduled Tokyo Games.

But Ryan was forced to reconsider her future after the cancellation of an Olympic qualifying tournament and has signed a management deal with Paul Ready of STN Sports ahead of her entry in the pro ranks.

“I feel like it’s at the point now where it’s near enough equal to the men.

“More girls are turning over, especially from the amateurs, and now you’re going to see more of a showcase for women’s boxing.

“I’ve had nine years of experience on GB and I feel like I’m going to bring a lot to the table when I turn over.”

Ryan is physically ‘better than ever’ after recent shoulder surgery and is expected to team up with trainer Clifton Mitchell when she starts her paid career at super-lightweight.

After an extensive amateur career, Ryan is ready to target world titles, with an ultimate ambition of fighting at the home of Derby County Football Club.

“I put a tweet out the other week about me boxing at Pride Park Stadium,” said Ryan.

“For me to do that, I feel like that would fulfil one of my dreams. When the crowds are back, I’m sure that can happen. I know a lot of people from Derby want to see that, so we need to get that going.

With my experience that I’ve got, I feel that I can be moved pretty fast to world titles.”

“I want to win a world title at two or three weights, and I believe I can do it as well. With my experience that I’ve got, I feel that I can be moved pretty fast to world titles.”

Manager Paul Ready of STN Sports said: “I’m excited that we have signed Sandy on a long-term management deal.

“The public will love her style – she can box, punch and is as tough as an Argentinian centre back.

“Sandy has a huge following in Derby and we are keen to build her there. The goal is to become a multi-weight world champion and box at her beloved Pride Park.”