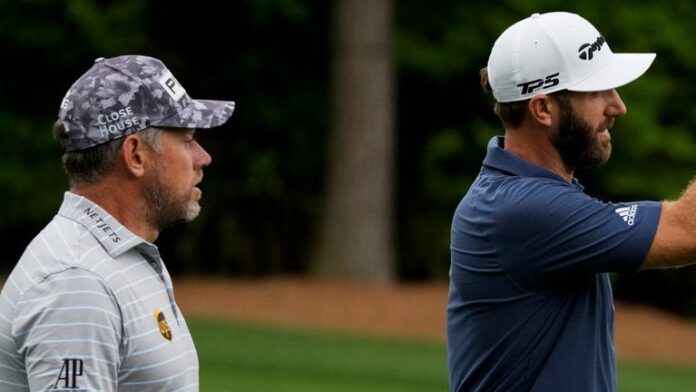 Overnight leader Justin Rose salvages a 72 to retain his Masters lead on seven under as Jordan Spieth and Justin Thomas power into contention, but defending champion Dustin Johnson and Rory McIlroy both miss the cut

Justin Rose needed another back-nine fightback to retain his lead at the halfway stage of The Masters as Dustin Johnson and Rory McIlroy both crashed out at Augusta National.

Rose was three over after four bogeys over the first seven holes which saw his overnight four-shot lead wiped out by a red-hot Bernd Wiesberger, but the Englishman steadied the ship with a run of pars and made three birdies in four holes from the 13th to haul himself back to seven under par.

Will Zalatoris (68) and Brian Harman (69) ended the day tied for second ahead of Marc Leishman and the resurgent Jordan Spieth, who enhanced his chances of a second Green Jacket with a 68, while in-form Players champion Justin Thomas is just one further behind along with Wiesberger and Tony Finau, who both fired excellent 66s.

But defending champion Johnson will have two days of inactivity before helping Sunday’s victor into a Green Jacket after he dropped three shots over the last four holes to miss the cut by two shots on five over, while a despondent McIlroy did not make a birdie until the 13th, by which time he had dropped shots at the fifth and seventh before a double-bogey at 10, where he carved his second into bushes, left him with too much to do to play another 36 holes.

Rose was two over after seven holes on Thursday before an eagle at the eighth sparked a remarkable burst of scoring, picking up nine shots in 10 holes in a 65 that was four shots better than the field, but that advantage was soon whittled away after another uncertain start.

Although his back-nine rally was not as spectacular as the first round, it was just as gritty as he got back on track with birdies at 13, 14 and 16 before two closing pars completed a resolute 72 which was enough to restore his place at the top of the leaderboard.

Sky Sports Golf for £10 a month

Zalatoris was a surprise name on six under after he birdied the last three holes to cap an inward 31, while Harman’s bid to become the fourth left-hander to win at Augusta gathered pace as he birdied 17 and 18 to join Zalatoris in a share of second place.

Leishman mixed six birdies with a lone bogey at 11 to get to five under, a score later matched by crowd-favourite Spieth, winner of his first title in almost four years at last week’s Texas Open and clearly still sky-high with confidence following a sensational career revival over the last three months.

Spieth navigated his way carefully around the first 11 holes, picking up birdies at the second and 10th before making his only big mistake of the day at the 12th, finding the front bunker from the tee and splashing out to five feet, only to miss the putt for par.

But the 2015 champion hit back with three birdies over the next five holes to install himself as the new favourite with the bookies and edge one ahead of long-time friend Thomas, who made a mockery of the difficulty of Amen Corner as he birdied 11, 12 and 13 and added another at 15.

Thomas, who would dethrone Johnson as world No 1 with a victory at Augusta, cost himself a bogey-free card when he slipped up at 18, but he will be delighted with his position at halfway as he shares sixth place with Wiesberger, Finau, Si Woo Kim, Cameron Champ and Hideki Matsuyama.

Finau was on course for the low round of the day after a superb front-nine, making an eagle at the second and four birdies in five holes from the sixth, and he was not too disheartened about a closing bogey at 18 and remained upbeat about his chances of landing a maiden major title.

The 31-year-old has endured a number of Sunday disappointments since his only PGA Tour victory in Puerto Rico in 2016, including three defeats in playoffs, but he said: “It keeps me hungry, it keeps me humble, and I definitely know that I definitely need a big win for me to feel like I’ve had a good career up to this point.

“But I think missing that ‘W’ keeps me humble and hungry, and hopefully I can notch that off this week.”

Former Players champion Kim had to putt with a three-wood after breaking his putter in a fit of pique on the 15th, but the South Korean still managed to par the last four holes for a 69 before heading to the manufacturers truck to seek out a new flatstick.

Cameron Smith, joint-runner up to Johnson in November, had a course-record in his sights when he eagled the 13th to get to seven under for the day, but the young Aussie then bogeyed 14 and found water with his second to 15, running up a double-bogey seven and settling for a 68 – two under for the tournament along with PGA champion Collin Morikawa.

Bryson DeChambeau got his calculations right more often than not as he bounced back from his opening 76 with a five-under 67 to creep into red figures, with only 20 players under the card at the halfway stage.

Johnson looked set to avoid an early exit and was safely inside the cut line on two over with four to play, but his second to the long 15th pitched on the front of the green and rolled back into the water, an error which led to a bogey six, and wayward drives at 17 and 18 cost him two more shots as he slumped to five over along with playing-partner Lee Westwood.

And McIlroy clearly still has much work to do to repair his swing issues as his hopes of completing the career Grand Slam of majors were put on hold for another year, the former world No 1 adding a 74 to his opening 76 which left him three strokes shy of making the weekend.