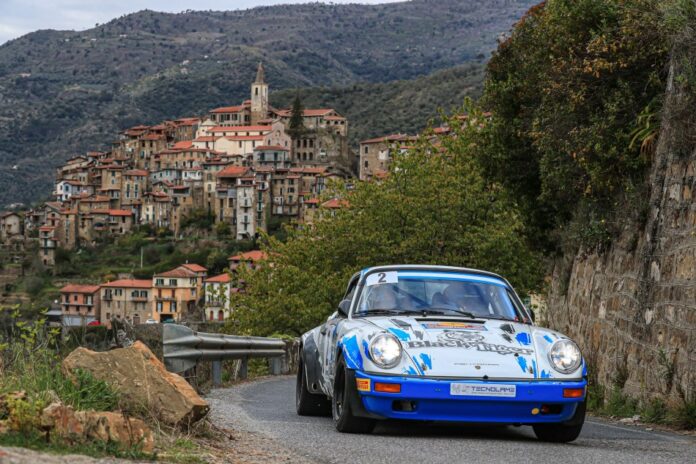 Lucio Da Zanche and Daniele De Luis (no2 Porsche 911SC) finished the second day of the 36th Sanremo Rally Storico where they started in the morning, holding a commanding lead over their nearest rivals to secure victory in Round 1 of the FIA European Historic Rally Championship.

Their task was made slightly easier when the no1 Lancia Delta Integrale of ‘Lucky’ and Fabrizia Pons retired on the opening stage of the day after, what was described as a ‘small accident’.  The no21 BMW M3 of Jean-Francois Mourgues and Denis Giraudet was also a retirement after the first leg, the former French champion having struggled with technical issues on day one.

The no16 Ford Sierra Cosworth 4×4 of Daniel Alonso and Alejandro Lopez was the second EHRC Category 4 finisher, 4m57.1 behind the leading Porsche, with the no26 Porsche 911 SC RS of Ermanno Sordi and Romano Belfiore finishing third.

Category 3 was won by the no4 Audi quattro of Zippo and Denis Piceno, the Italian pairing finishing 4th overall and over 17 minutes ahead of their nearest rival, the no35 Porsche 911 of Jean Paul Palermo and Mattia Pastorino, in a dominant performance.

The EHRC honours in Category 2 were won by the no24 Porsche 911 Carrera RS of Maurizio Pagella and Roberto Brea.  Ernie and Karen Graham moved up to second position from fourth overnight in the no37 Ford Escort RS1800, 2m17s behind the no24 Porsche, 53 seconds ahead of the no22 Alfa Romeo GTAm 1750 of Laszlo and Edit Mekler.

Reigning champions Antonio Parisi and Giuseppe D’Angelo took their first Category 1 win of 2021 finishing 7m09s ahead of the no38 BMW 2002Ti of Carlo Fiorito and Marina Bertonasco.

The next round of the 2021 FIA European Historic Rally Championship will be the 29th Historic Vltava Rallye in the Czech Republic on the 5-7 May.