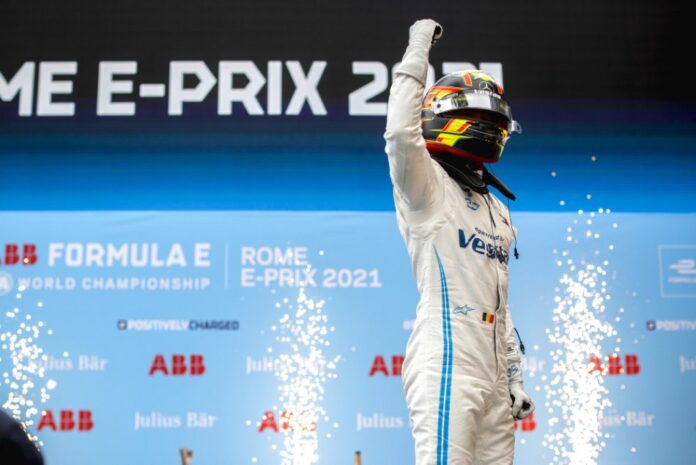 After his pole position performance yesterday unravelled over the course of a luckless race, Mercedes-EQ star Stoffel Vandoorne earned his redemption in fine style today (11 April), dominating the second leg of the Rome E-Prix to fire himself firmly into title contention in the ABB FIA Formula E World Championship.

Vandoorne began the race around the Circuito Cittadino dell’EUR in fourth place, but he did not stay there long. Following another safety car start due to the damp conditions, Nick Cassidy led the field for Envision Virgin Racing from fellow series rookie Norman Nato (ROKiT Venturi Racing), but the New Zealander’s baptism of fire in Formula E continued as he locked up into Turn Three and spun away his advantage.

Nato duly inherited the top spot ahead of Pascal Wehrlein (TAG Heuer Porsche) and Vandoorne, both of whom would soon demote the ROKiT Venturi Racing machine to third position. The Belgian then set about closing down the 1.3-second gap to his German rival in front.

Vandoorne was the first of the pair to activate his opening Attack Mode, conceding ground only to Wehrlein. The latter followed suit shortly after, elevating the Mercedes man to the lead, at which point the race turned on its head. A coming-together between former champions Lucas Di Grassi (Audi Sport ABT Schaeffler) and Sébastien Buemi (Nissan e.dams) left the Brazilian in the wall, bringing out a Full Course Yellow.

That neutralised the remaining two minutes of Wehrlein’s Attack Mode, preventing him from launching a counter-offensive – and from that moment on, Vandoorne never looked back.

With 13 laps in the books, the 29-year-old was almost five seconds clear of his nearest pursuer, which was now Mahindra Racing’s Alexander Sims, who spent the early stages battling his way past Maximilian Günther (BMW i Andretti Motorsport) and Nato before catching Wehrlein at the Full Course Yellow re-start to pinch second place.

Vandoorne’s comfortable margin was erased with just a handful of minutes left on the clock, when René Rast tapped the wall exiting the final corner and broke his suspension to compound a tough day for Audi Sport ABT Schaeffler. With the German’s car stuck in the wall, the safety car was summoned, bunching the pack together.

What followed was a single-lap, flat-out blast to the chequered flag, with the leader deploying his FanBoost to put some breathing space between himself and Sims and hold on to the end. The Briton capped an impressive race by clinching the runner-up spoils, with Nato taking third on-the-road after re-passing Wehrlein with 13 minutes remaining.

The Frenchman, however, would subsequently be disqualified for excessive energy consumption, promoting Wehrlein to the podium. In some consolation for ROKiT Venturi Racing, Edoardo Mortara wound up fourth following a strong drive, producing a spectacular save on the last lap after briefly losing control over a bump. Günther followed him home in fifth to finally kick-start his season, with Saturday podium-finisher Mitch Evans (Jaguar Racing) fighting up the order into sixth.

Defending champion António Félix da Costa (DS TECHEETAH) was one of the stars of the show as he scythed his way through the field from a lowly 16th on the grid to seventh at the flag, with Tom Blomqvist (NIO 333), Dragon/Penske Autosport’s Nico Müller and Sebastien Buemi (Nissan e.dams) rounding out the top ten.

Pole-sitter Cassidy’s day went from bad to worse as, after battling back from 11th to eighth following his early spin, he was tipped into the wall by Oliver Rowland (Nissan e.dams) – an indiscretion for which the Briton picked up a ten-second penalty.

There were no points, either, for Saturday winner Jean-Éric Vergne (DS TECHEETAH), who could manage no better than 11th after struggling in qualifying. He then lost further time due to Robin Frijns (Envision Virgin Racing) failing to keep within ten car-lengths of the car ahead during the safety car start – for which the Dutchman received a five-second penalty.

Indeed, none of the top three in the championship standings entering the race ultimately scored, with two of them – Jaguar Racing’s Sam Bird and Mercedes-EQ’s Nyck de Vries – eliminated in a three-car final lap pile-up initiated when the Dutchman lost control on the run to Turn Seven, with Rowland similarly caught up in the mêlée.

The 2020/21 Formula E season will continue with another double-header in Valencia, Spain on 24/25 April.

“Today was all about redemption for yesterday. The pace of the car has been great the whole weekend and today we managed to get a decent qualifying session despite the challenging track conditions. I want to congratulate my team. We had a very good strategy with Attack Mode and managed to build a gap when needed. It feels good to achieve this today with this team.”

“The team seemed pleased with the result today. The gap to overtake Pascal was pretty narrow, but we reacted well and had a successful strategy. I am happy with the race and the way we used Attack Mode. It is my second weekend with Mahindra Racing and we still have lots to learn with pace and qualifying. We’ll keep working and trying.”

“It feels good to be on the podium, but I am still disappointed as I was leading the race at one point. We missed some good opportunities but it was a good day for us overall. In the race and qualifying it feels like we are lacking pace. We need to keep working and improve for the next race. I’m pleased with my result on my second weekend with TAG Heuer Porsche Formula E Team. Stoffel was extremely fast today so congratulations to him on his first win of the season!”

Oprah reveals the ‘inappropriate question’ she once asked that makes her...