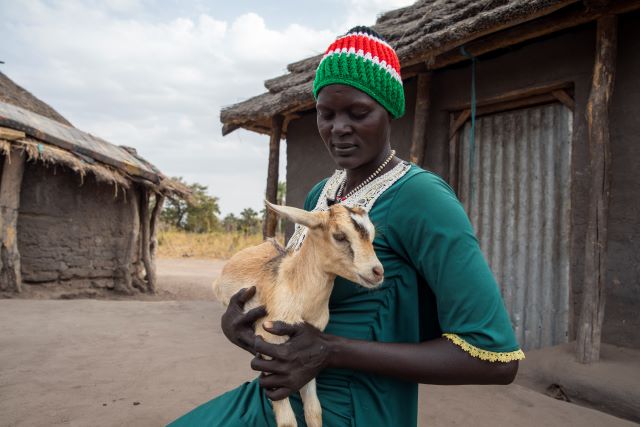 The goats started swarming Khana Akuang Malual before she had even put the plastic tub of salt on the ground in front of her tidy mud-brick home in rural South Sudan, in January. There were 20 of them – her most valuable possessions – jostling one another to get a lick.

Just three years ago, she had none.

Amidst delays implementing South Sudan’s 2018 peace agreement, civilian-on-civilian violence, driven by access to resources, intensified in Lakes State, where Khana lives. Her husband, along with many of the region’s men, had to limit his movements to keep safe, so the burden of running the family farm fell to her. She was struggling to produce enough to feed her seven children, even one meal a day. Meals were grain heavy and light in vitamins.

But, with training from the Food and Agriculture Organization of the United Nations’ (FAO) Sustainable Agriculture for Economic Resiliency (SAFER) project, between 2018 and 2020, Khana increased her farm’s production by 150 percent. It enabled her not only meet to her family’s immediate needs, but also to expand into goat rearing.

“My children, my husband and I are the healthiest we’ve ever been,” she says, taking a seat in a blue plastic chair one Monday in January while the goats furiously pull the tub of salt back and forth. She is a sturdy woman with a quiet demeanor and calloused hands.

Khana boosted her production, she explains, by diversifying her produce and applying good agronomic practices.

She used to plant only groundnuts and sorghum during the wet season, which generally runs from April to October. Now, she has added cowpeas to her wet season line up and started growing vegetables during the dry season – a practice SAFER has popularized in the area. In addition to kudra, a vitamin-rich leafy green vegetable that is popular in Lakes, she also produces harder-to-find vegetables, like cabbage, eggplant, kale, onion and tomato.

The SAFER project, which FAO implemented thanks to funding from the United States Agency for International Development (USAID), provided her with seeds, tools, and – most importantly, she says – new knowledge.

She learned about intercropping, the practice of planting both a cereal and a legume in the same field to reduce fertilizer application, suppress weeds, and reduce her crops’ susceptibility to insects and disease. By planting in rows, rather than scattering the seeds pell-mell, she learned that she could reduce seed waste. The space between plants makes it easier to move through the field to weed and address pests so her plants are healthier.

The SAFER project’s method of bringing farmers together for training, she explains, fostered peer-to-peer learning and collaboration that also contributed to her increased production. For example, in her group of seven men and 23 women, farmers exchange the use of higher-value assets. Group members who have plows and no oxen share with group members who have oxen and no plows. Those who have neither can offer labour.

“We grew more than we needed and sold the rest,” she says.

Business management and finance courses, which FAO delivered along with basic literacy and numeracy support, inspired her to invest the money she earned selling her surplus grains and vegetables to launch a goat rearing venture.

She bought 16 goats that quickly multiplied to 30. The goats provide milk – enough for her children plus extra to sell – and meat for special occasions. Their manure is excellent fertilizer for her farming. One day, when her children are older, Khana says she plans to use the goats to fund their marriages.

Her circumstances remain challenging. Insecurity still limits movement – particularly for her husband. Armed civilians stole eight of her goats while they were out grazing, and two more died from disease.

But the family now eats twice per day instead of once and their meals are full of fresh vegetables.

“We don’t get sick nearly as often as we did when we ate only grains and milk,” she proclaims.

And Khana has big dreams.

“Within the next five to ten years, I want to be farming for business – not consumption,” she says.