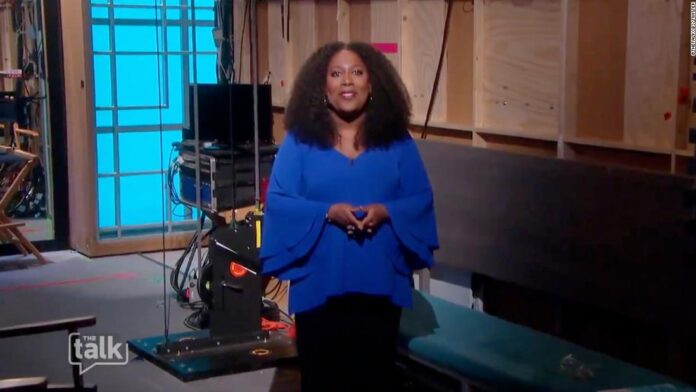 It was the first new episode since cohost Sharon Osbourne left the CBS daytime talk show in the wake of a heated discussion she had with fellow cohost Sheryl Underwood over Osbourne’s support of her friend, Piers Morgan.
Underwood questioned that support after Morgan’s negative comments following Prince Harry and Meghan’s interview with media mogul Oprah Winfrey were criticized as being rooted in racism.
Underwood opened Monday’s episode by explaining that it was the panel’s first time in studio since the incident with Osbourne and her exit from the show.
“We need to process the events of that day and what’s happened since so we can get to the healing,” Underwood said. “Over the next hour we will honestly discuss what occurred and explore some of our feelings. And we’ll also show you how anyone can become more comfortable with discussing important issues and having difficult conversations.”
The show ended up going on a brief hiatus after the debate and allegations surfaced via an article by journalist Yashar Ali that Osbourne used racist and homophobic language while speaking about her former colleagues on the CBS talk show.
Ali cited former “Talk” co-host Leah Remini, who spoke on the record in the piece, as well as a number of unnamed sources.
CNN has not independently verified the claims. A spokesperson for Remini confirmed the accuracy of her statements as reported by Ali and declined further comment when contacted by CNN.
Osbourne tweeted an apology for the blowup with Underwood and denied that allegations raised in Ali’s reporting in a statement from her spokesperson, Howard Bragman.
“The only thing worse than a disgruntled former employee is a disgruntled former talk show host,” he said in a statement to CNN. “For 11 years Sharon has been kind, collegial and friendly with her hosts as evidenced by throwing them parties, inviting them to her home in the UK and other gestures of kindness too many to name. Sharon is disappointed but unfazed and hardly surprised by the lies, the recasting of history and the bitterness coming out at this moment.”
Osbourne was the only remaining original cast member of “The Talk,” which debuted in 2010.
During Monday’s episode, Underwood and her fellow cohosts Carrie Ann Inaba, Amanda Kloots and Elaine Welteroth welcomed expert on diversity, equity, inclusion and justice Dr. Donald E. Grant to offer advice on discussing issues of race and nationally acclaimed trauma therapist and life coach Dr. Anita Phillips, who shared expertise on how to heal after a painful event or conversation.