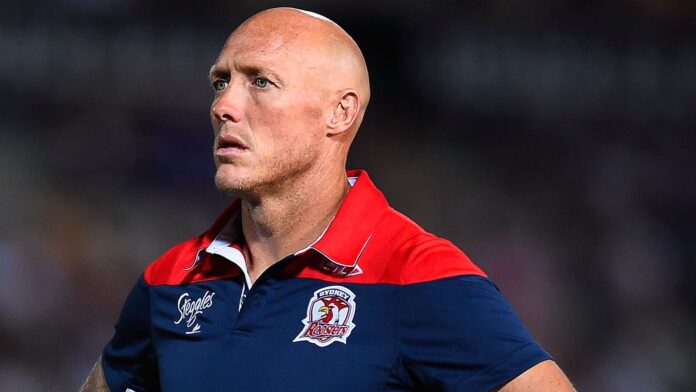 Cronulla are lining up a new coach in Sydney Roosters assistant Craig Fitzgibbon, while a chronic shoulder injury has forced Michael Morgan to retire

Jenna Brooks looks at the latest news from the NRL, including Craig Fitzgibbon heading to Cronulla and Josh McGuire being set to make his St George Illawarra debut.

It looks like Craig Fitzgibbon will be the next coach of Cronulla.

Reports suggest the Roosters assistant is set to take control from 2022, with Penrith’s assistant Cameron Ciraldo to join him as his number two.

Fitzgibbon has won two Premierships as assistant to Trent Robinson at the Roosters, and it’s believed they have given him their blessing to look for a head coach position.

John Morris was given the top job in the Shire ahead of the 2019 season, and despite guiding his team to the finals the last two years, the club doesn’t believe he is the man to secure them Grand Final glory.

Tom Trbojevic is set to return this week from the hamstring injury he suffered in a bathroom mishap before the start of the season.

Prior to news of his injury, video emerged of the Manly fullback in a late-night running race, although Trbojevic insisted that had nothing to do with the setback.

The Sydney Morning Herald reports that the incident has left the player embarrassed, and despite insisting the injury occurred at home, Trbojevic has reportedly asked the club to fine him.

Instead, it was decided Trbojevic would donate money to junior players in the Mona Vale area – where he grew up playing – and in addition, he will spend time with the Sea Eagles junior rugby league community.

Trbojevic has battled hamstring and shoulder injuries over the years and has only played 19 games in two seasons.

“I haven’t played much footy the past year, so it’s good to be finally back with the boys,” the Sea Eagles star said. “I had a few field sessions last week but only re-joined the main group this week. I’m feeling good.

“I wanted to play against the Warriors, but it wasn’t the case and the extra time will only help me again. I’ll be out there doing my best but won’t overstep the mark.

“Chez’ (Daly Cherry-Evans) is still our most important player. He’s very good for us and ices those big moments. Look at what he did again on Friday night.

“Once you get in those close games, knowing you’ve got him on your side, you’ll win more times than not. He’s so vital for us.”

Josh McGuire is set to make his St George Illawarra debut against the Warriors on Sunday.

It’s believed the Cowboys and the Dragons finalised the paperwork regarding McGuire’s transfer early this week. The deal will see the forward remain at the club until the end of 2022.

The 31-year old brings with him a wealth of experience, having played more than 230 NRL games and is a former Queensland and Australia representative, although he has recently been overlooked at the Cowboys.

McGuire reconnects with the Dragons coach Anthony Griffin, having played under him at the Brisbane Broncos.

Fears went through Canberra’s camp last week when Josh Hodgson was forced off the pitch against the Panthers with a hip injury.

However, the England international trained on Monday. He didn’t complete every drill, but the club didn’t send him for scans and are hopeful he won’t miss a game and will be fit to play Parramatta on Saturday.

After missing Brisbane’s defeat to South Sydney with a shoulder injury, Herbie Farnworth is a chance to face the Panthers on Thursday.

And while we are talking about Brisbane, their playmaker Anthony Milford looks to be headed to reserve grade for the first time in his career.

The club confirmed Milford will play in the Queensland Cup this weekend after he was seen spotted training away from the first-grade team.

Brisbane are 12th, having won just one of their opening five games this season.

As anticipated, North Queensland Cowboys captain Michael Morgan has been forced into early retirement due to a chronic shoulder injury.

The 29-year old has played his entire NRL career with the Cowboys. He has represented Queensland 12 times and has also pulled on the famous Kangaroos jersey 12 times.

“It’s been well documented, the problems I have had with my shoulder and I’m now at a point where I am unable to continue playing with it,” Morgan announced.

“I’ve had an amazing career, one that I could only dream of as a kid.”