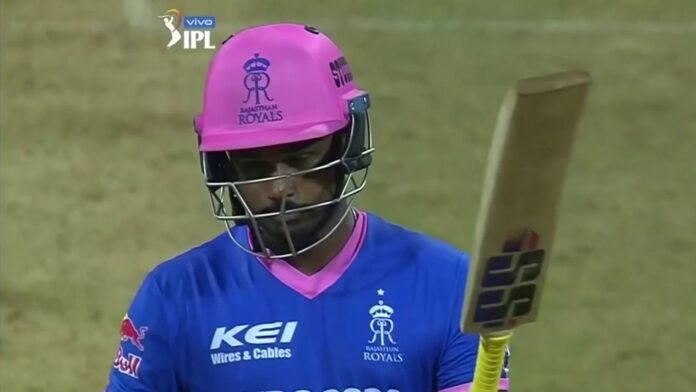 Punjab Kings beat Rajasthan Royals in a thrilling finish as a combined 438 runs were scored in Mumbai; Sanju Samson falls trying to win the game with a last-ball six after scoring a brutal century; watch KKR vs Mumbai Indians from 2.50pm, Tuesday, Sky Sports Cricket

Sanju Samson hit a blistering 119 from 63 balls but fell to the last ball of the match as Punjab Kings beat Rajasthan Royals by four runs in an IPL run-fest in Mumbai.

The newly-appointed Royals captain played a stunning knock to take his side to within a hit of chasing down the 222 they needed for victory but came up just short in a thrilling finale.

With 11 needed from three balls, Samson smashed Arshdeep Singh over extra cover for six before taking the bold decision to turn down a single from the fifth ball. Realistically needing a six from the last to win as a result, Samson made a clean connection but could not clear the rope and was caught at deep cover.

Left-seamer Arshdeep finished with match-winning figures of 3-35 for Punjab while the Kings’ 221-6 was led by KL Rahul’s 91 from 50 balls and a six-laden 64 from 28 balls for Deepak Hooda.

An incredible finish as Samson turns down a single from the penultimate ball, #RR need five from the last ball and he can’t quite finish the job for his team! #IPL2021

It was another young left-armer who made the first impact in the game as Rajasthan debutant Chetan Sakariya dismissed Mayank Agarwal in the third over and Rahul, on 15, should have followed him in the seventh, only for Ben Stokes to shell the catch at long-off – the first drop of many in the match.

Stokes made amends by taking a much tougher catch to remove the dangerous Chris Gayle (40 from 28) just before the halfway stage of the innings but the arrival of Hooda only made things worse for the Royals.

The 25-year-old has a well-earned reputation as a big hitter and he outdid himself over the next eight overs, hammering six sixes on his way to a 20-ball fifty before he finally succumbed to Chris Morris in the 18th over.

A superb catch from Sakariya at least spared Rajasthan a couple of overs of Nicholas Pooran getting after them but Rahul, who despite scoring a strike-rate of 182, had somehow found himself as understudy to Hooda, was still going strong.

He breezed into the nineties before another fine boundary catch, this time from Rahul Tewatia, ended his innings early in the 20th over as Sakariya (3-31) showed his death-bowling skills to limit the damage.

Rajasthan opted not to open with Jos Buttler, instead sending Stokes in with Manan Vohra but both openers were dismissed inside four overs, meaning Buttler still benefitted from batting in the powerplay despite coming in at No 4.

The lost of Stokes (0), caught and bowled third ball after skying a pull shot off Mohammed Shami, and Vohra, also caught and bowled after thumping the ball back at Arshdeep, was a significant blow to the Royals but they recovered well through Samson and Buttler, who hit four boundaries on the trot off Riley Meredith.

However, Jhye Richardson bowled Buttler (25 from 13) with a superb slower-ball yorker in the eighth over and while Shivam Dube (23 from 15) and Riyan Parag (25 from 11) played very useful cameos, as the innings progressed it became clear that Rajasthan’s hopes lay squarely on the shoulders of their skipper.

Samson was up for the challenge and when he went four, six, four at the start of the 18th over from Richardson to bring up a 54-ball century, the Royals suddenly appeared favourites with 26 needed from 15 balls.

What a knock! His first game as #RR captain and he marks it with a century!

Another Samson maximum off Meredith in the 19th took it took to 13 from the last over and Arshdeep started it superbly, allowing just two singles from the first three balls.

Sansom cracked the next over the ropes for his seventh six, though, to change the momentum once more and his confidence was such that he refused a single after hitting the fifth ball out into the offside.

Had he taken it, Morris would have been on strike with four needed for victory, instead Samson backed himself to win it with a six. He was less than a metre short but that made all the difference as Hooda took the catch on the boundary and the Kings were able to celebrate victory in their opening game of the campaign.

Watch game five of IPL 2021, between Kolkata Knight Riders and Mumbai Indians, from 2.50pm on Tuesday on Sky Sports Cricket.