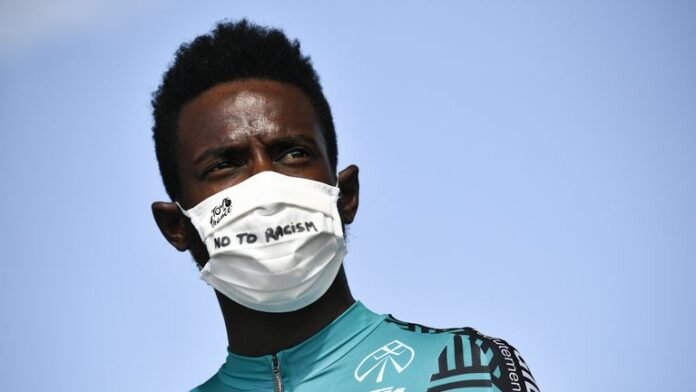 Speaking in his native French, Kevin Reza, the only black rider competing at last year’s Tour de France, calls on cycling’s governing body the UCI to tackle cases of racism with the same vigour as doping cases

Kevin Reza’s facial expression remains serious as he describes his newfound freedom in discussing racial inequality in cycling and society at large. “It’s not something that weighs on me today.”

Amid cycling’s muted response to the Black Lives Matter movement last year, in the wake of George Floyd’s death, one voice in the sport emerged loud and clear at the rearranged Tour de France.

Reza, the only black rider out of the 176-strong peloton that started the race in September, called for greater solidarity in the peloton as he addressed the historical issue of diversity in a series of interviews.

His words resonated. At the start of the final stage, Reza rode at the head of the peloton near the race winner Tadej Pogacar and the other classification leaders. Riders also sported coronavirus masks which featured the slogan #NoToRacism beforehand.

Reza, born on the outskirts of Paris in a family from the French overseas region of Guadeloupe, said after the finish on the Champs-Elysees: ‘There is a lot of work left to do.’

Now, six months on, Reza explains in his native French to Sky Sports News why speaking up in the hope for progress towards improved inclusion is so important.

“Since last year, it’s been a kind of release and opening that was given to me,” he says. “I grabbed it with both hands.

“It’s just something that makes me want to be able to share and interact with people, those who may or may not be racist, but at least we can have a proper exchange and I can share my ideas and thoughts.

“And that’s something that I enjoy since it’s a subject that remains taboo and that we aren’t used to talking about openly. I’ve been able to do that since the 2020 Tour de France.

“It’s not like I couldn’t do that for years, but I was given the opportunity to do it on the biggest race in the world. This is something that makes me happy and that also allows us to spark debate.”

Reza rides for French side B&B Hotels p/b KTM, among the second-division UCI ProTeams, and he will be targeting a fourth Tour de France this summer after his team were invited to take part for the second year running.

The 32-year-old, into his 11th year as a professional, is acutely aware he is among a minority. There are only five black riders competing in this season’s WorldTour – the highest division of professional road cycling.

In May 2017, Gianni Moscon, then of Team Sky and now with Ineos Grenadiers, was suspended for six weeks for racially abusing Reza at the Tour de Romandie and sent on a diversity training course.

But the Italian rider was not disciplined by the sport’s governing body, the Union Cycliste Internationale (UCI).

“I’ve known racism since I was young,” says Reza as he reflects on his experiences of discrimination.

“I am destined to know it by my birth and my origins, it is like that. Unfortunately, it is painful and degrading. But we are used to living like that and it should not be a habit.”

Reza concedes to not having all the answers to cycling’s question around diversity but is in no doubt at how the UCI should tackle racism in the sport.

After a short pause to consider his answer, Reza replies: “I have reflected and thought for a long, long time about this and as you say, this is the biggest and most important organisation in cycling.

“They manage to ban cheaters who take drugs, which is normal… I think that racism and discrimination in general must be on a par with these kinds of acts. I do not see any other action that can be taken against racist acts.

“As a minimum, you would expect to see a racist get punished like a doper. I think this is one of the best solutions. It would show they’re taking a strong stance in terms of supporting action against the various forms of discrimination within sport.”

In a statement provided to Sky Sports News, the UCI said: “The Union Cycliste Internationale (UCI) firmly condemns all forms of racism and discrimination.

“On the contrary, via its Constitution, its Code of Ethics, its Regulations and its programs, it upholds the principles of inclusion and the respect of others.”

Sky Sports News also contacted the UCI for an on-camera interview but is yet to hear back.

As racism continues across social media in sport, some football clubs and players have opted to stop taking a knee because they believe it has lost power – a feeling echoed by Reza.

“I do think that it’s a strong gesture and that remains the case now, but will it be enough to make a big difference and change certain people’s thoughts?” he asks.

“I don’t think so because people are starting to get used to seeing it and don’t take as much notice as when we first saw it on TV. It is becoming a habit and we get tired of habits quite quickly.”

In a bid to increase racial diversity in cycling, Britain’s Giro d’Italia winner Tao Geoghegan Hart revealed in February that he will sponsor a young rider in partnership with his former development team Hagens Berman Axeon.

In an Instagram post, the Ineos Grenadiers rider said: “Cycling has a problem with diversity and inclusivity. This is a fact.”

Reza was prompt to praise the initiative, describing the 26-year-old Londoner as a “gentleman”.

“It’s strong, it’s a very good start and then it also encourages young people who cannot afford financially to be able to reach the highest level,” he says.

Reza believes the start to a more unified peloton begins with his fellow cyclists taking a more active interest in wide-reaching societal issues, as Geoghegan Hart has displayed.

“Now, I find that there is a little less solidarity, less support between the riders, and even less between the teams,” he adds.

“So I don’t really have a solution for what the peloton can do. It is up to everyone to follow their own debates, their own thoughts and their ways of speaking, saying and doing things.

“It’s up to the riders to know what each one wants to do. It’s complicated, but for example, a peloton for a single race may be 200 riders.

“Among the 200 riders, there will not always be the same opinions, so it is difficult to tell everyone to stick together on sensitive issues like this.”

Highlighting the efforts by global sports stars such as Lewis Hamilton to implement positive change, Reza knows action, and not just words, needs to be forthcoming across the sport.

“I am not going to lead a fight with my two arms,” says Reza. “I’m not strong enough for that. Besides, I’m not as powerful as some others in top-level sport.”

The issue of diversity and inclusivity in cycling is not unique within sport. However, a decade after Yohann Gene became the first black rider at the Tour de France, one form of progress is athletes like Reza being compelled to find their voice from within the minority.