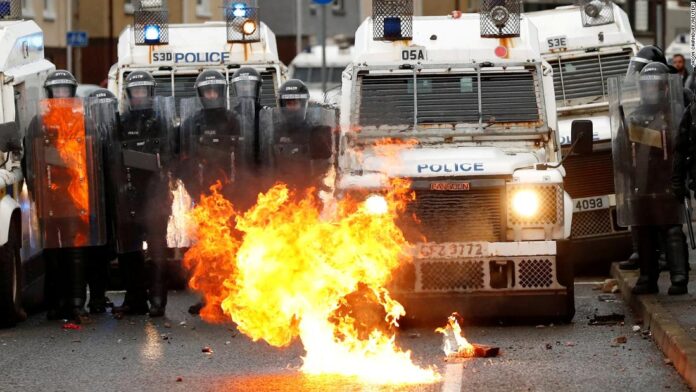 The disorder that has shaken parts of Northern Ireland over the last two weeks has highlighted the fragile peace that binds together the region’s diverse community of loyalists and nationalists, more than 20 years after the Good Friday Agreement.
Loyalists want Northern Ireland to remain part of the United Kingdom, while nationalists would like to see Northern Ireland become part of the Republic of Ireland.
The first few nights of violence began after youths in a loyalist pocket of Derry/Londonderry launched a petrol bomb at police officers who had tried to break up their gathering.
The riots spread to four other towns and cities in Northern Ireland, reaching fever pitch in west Belfast last Wednesday, when some 600 people from neighboring loyalist and nationalist communities clashed along a so-called peace wall separating the two areas.
The disorder unfolded in the wake of a series of events that have inflamed some loyalist communities, including a decision by authorities not to prosecute nationalist party leaders for allegedly breaking coronavirus restrictions at the funeral of a former senior IRA figure, and a recent police crackdown on drug gangs supported and run by loyalist paramilitary forces.
But the anger is underscored by tensions around a key part of the Brexit agreement: The Northern Ireland Protocol, which creates a de facto trade border in the Irish Sea.
Loyalists believe the Protocol presents an existential threat to the future of the union, and could wreck the Good Friday Agreement — the Northern Ireland peace deal that marked an end to the period of violent conflict known as the Troubles.
At the heart of the riots are young people — some as young as 12 — who, despite being born after the Good Friday Agreement was signed in 1998, are held hostage by the identity politics that defined that era and which continue to frame the present.
Young people have always been used as pawns for some of the sinister forces within our society,” pastor Stephen Reynolds, chairman of Conway Youth Centre, told CNN.
“We like to say that they’re being used to do the dirty work of the boys who don’t want to get caught doing it.”
This was demonstrated in videos circulated on social media last week, in which adults could be seen cheering on young people who petrol bombed and hijacked a double decker bus on Belfast’s Shankill Road.
“They’ll be told it’s for a cause … a loss in their identity through the Irish Sea border, through the two-tier policing system many people talk about in the community in relation to the [IRA’s] Bobby Storey funeral, and those kind of tensions,” Reynolds said.
“But whether the young people on the streets in this rioting understand the ins and outs of those issues, I’m not sure.”
The pastor said older generations were still passing down stories of the Troubles to their children, which he said was one reason why “we still have the troubles that we face today.” But he stressed that the “majority … don’t want to see us returning to a time when things were really bad.”
The sectarian violence of the Troubles, between 1968 and 1998, left more than 3,500 people dead.
Rebecca Dickson, a 22-year-old trainee youth worker at the Conway Youth Centre, said the rioters don’t define the community at large and that she and her contemporaries are keen to move beyond the labels of the past.
“We are, at the stage now where we don’t care what you’re like, we don’t care what you represent, if you’re nice to us we’ll be nice back to you,” she said. “It’s just been blown completely out of proportion.”
“It’s kids that don’t really know what is going on,” Dickson added. “The protesters aren’t sitting around at night reading the Brexit rules.”
“They’re just doing it for anger and the anger of other people I think as well … they have heard things or seen on the news and have taken it and used it to fuel their violence,” she said.
Leaders have exploited those fears, using a legacy of violence to do so, experts say.

A project ‘built on sand’

Politicians are telling communities that their identities are under threat and that their sense of “Britishness” is being eroded, said Jonny Byrne, a senior lecturer in criminology at Ulster University.
This, compounded by the stress of the pandemic, has culminated in the disorder witnessed in recent weeks, said Byrne, whose research focuses on paramilitary violence, young people’s participation in political violence and the community’s experiences of public order policing in Northern Ireland.
He explained that while the Good Friday Agreement brought the armed conflict to an end, it didn’t change how people there coexist.
“We never got to grips with the fundamental building blocks of how to create a new society where people — Catholics and Protestants — can live together, or how you create a society where we can talk about what happened from 1969 to 1998,” Byrne told CNN.
The peace project is “so fragile, it’s built on sand,” he added, explaining that it is neither mature enough nor embedded into society enough to deal with the pressures that Brexit, the Northern Ireland protocol, or a global pandemic present.
“So whenever [pressures] manifest themselves … it comes back to the traditional format of Orange versus Green, Catholic versus Protestant, Republican versus Loyalist, and inevitably it ends in violence in the streets and with police officers being injured,” he said.
Byrne noted that, perhaps unsurprisingly, the areas where recent violence has erupted are those disproportionally affected by the conflict.

Green Party Councillor Brian Smyth, who represents the Belfast area of Lisnasharragh, told CNN that the trauma of the past has been passed down by generations; without conflict transformation or a reconciliation commission, the same issues remain.
“So many people on both sides of the communities feel like they’ve been abandoned, they’ve been ignored,” he said, noting that more people have taken their own lives in Northern Ireland since the Good Friday Agreement than were killed in violence during the Troubles.
And education and social housing remain a troubling issue for disadvantaged communities, with youth services bearing the brunt of cuts due to austerity.
“Where is our commitment to giving them [the youth] hope?” he said.
In the 2015 paper “Inequality and Segregation in Northern Ireland Schools” researchers Vani Borooah and Colin Knox found that 21% of 30-34 year olds had not completed post-primary education — the highest rate in the UK.
Collectively, Northern Ireland’s government-funded secondary schools fail to meet the minimum acceptable standard for post-primary schools in England,” with only 33% of Protestant grammar schools reaching that standard, compared to 41% of Catholic grammar schools, the report said. Protestant schoolboys fare the worst of all groups overall.
It is in this environment that young people are “being exploited by others,” Smyth said.
“There has been a lot of rhetoric … the last six months, particularly around Brexit, and everybody ramping it up — comfortable old men stirring the pot, sitting in their nice houses living in their gardens. But the kids on the ground are angry, disillusioned, disenfranchised … [they are the ones] who are also going to be dealing with the impact of it.”
“Division, division, division, keeps some people well off and comfortable,” he added.
The past weekend saw a lull in street violence, with only “minor trouble” according to police, after loyalist groups called off parades and protests following the death of Prince Philip on Friday.
That quiet held on Saturday — the anniversary of the signing of the Good Friday Agreement.
But political leaders fear the violence could return after Philip’s funeral next weekend.
“We have a history in Northern Ireland where people can turn violence on and turn violence off like a tap,” said Byrne.
Smyth questions just what it will take for the violence to stop.
“When a kid dies? When a police officer dies or a bus driver is attacked? Maybe this is uncomfortable for people, I think we need to have this conversation,” he said.
“If we’re not careful in our language, we end up with corpses.”

CNN’s Salma Abdelaziz and Florence Davey-Attlee contributed to this report.