Home Sport Bayman keen for Superleague not to take step back 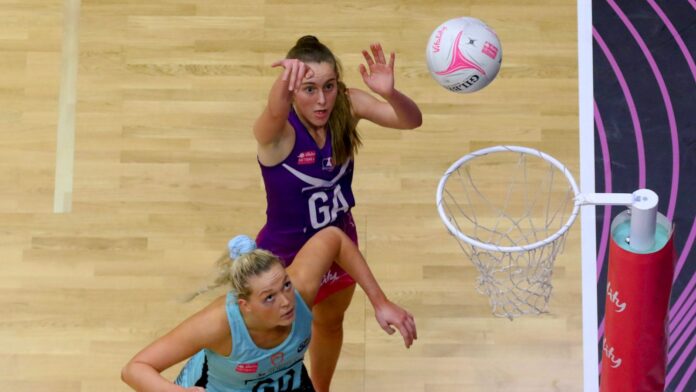 As the Vitality Netball Superleague moves from Wakefield to its new home in London for the second half of the season, Sara Bayman and Tamsin Greenway discuss how the competition should continue to move forwards beyond the 2021 season.

Both Greenway and Bayman know England’s domestic league inside-out and back to front; both have been at the sharp end of proceedings as players, and more recently as coaches.

This season, England’s domestic competition has taken a different format to previous years, with two centralised venues being chosen to house the competition. With Covid-19 still being present in the UK, the aim was to do as much as possible to ensure the safety of players, coaches and all involved.

The first 11 rounds, which have just concluded, were hosted in Wakefield and the rest of the season will now take place at the Copper Box Arena in London.

Every match has been shown live across Sky Sports‘ platforms and the production in Wakefield is something that fans, players and coaches alike, have all spoken extremely positively about.

Thank you to all the workforce @EnglandNetball @ProductionPark_ table officials, umpires and @SkyNetball for all your hard work footage and making the 1st part of the season seamless 😀 #professional #class #ontolondon

And what a game to end on – thank you @EnglandNetball, Wakefield has been fantastic. Can’t wait for London… a big shout out to @weetwoodhall too. Second half the season on its way. Proud of my team and all the @Wasps_Netball staff who work so very hard 😊 https://t.co/LlGIjdtFCn

Studio 001 has provided a slick and professional home for the Superleague, and with every match taking place in one venue, it enabled all contests to be broadcast across Sky Sports’ platforms. This will continue when the competition re-commences in London on Sunday, April 25.

Alongside live matches on Sky Sports on Fridays and Mondays, the streams on the Sky Sports YouTube channel have produced higher viewer numbers than ever before.

Already, over one million people have tuned in and there are still nine rounds, the two play-offs and the Grand Final to go.

Speaking to Hannah Wilkes during a recent episode of Off The Court, and addressing a question that netball supporter Hazel Mead sent in, Bayman believes that key discussions will need to take place soon about how the 2022 season will look.

As a director of netball at Loughborough Lightning, Bayman is aware of importance of ticket revenues from home venues, but she also doesn’t want to sport to take a step back from its current position.

1. How does @NetballSL balance the benefits of a centralised venue with the need for supporters of all teams to be able to access live netball locally. Is there a way to do more Super Saturday / Big Easter Weekend events throughout the season? #offthecourt

“That discussion is going to come around pretty soon for clubs and the league,” Bayman said. “It’s a really tough one because I think that pretty much every club has enjoyed that venue at Wakefield.

“The staging of it, how professionally it has been done and the fact that it’s gone out there to the masses looking that good [all have been positives].

“So, how do you still get that with clubs needing ticketing revenue and wanting home and away fixtures? That’s really tough.

“I think that it will be discussed at length by the league in terms of how the production looks next year and also what the format is. Do you have more games in [centralised] venues? Do you have clubs hosting a weekend each?

If you want to keep on progressing it and getting more eyes on the sport, I don’t think that you can take a step backwards in terms of how the sport looks from where we’re at now.

Greenway, someone who is a multiple Superleague winner and who set up Wasps’ netball franchise, agrees with Bayman that English domestic netball needs to continue to move forwards.

Covid-19 had a huge impact on netball at the elite level; it forced the cancellation of the 2020 Superleague term and hit clubs’ finances significantly.

However, out of the need to ensure that all players, coaches and officials are as safe as possible, centralised venues were selected and that has opened up new doors.

“I’m all for getting it into central venues,” Greenway said. “You don’t necessarily need to have one venue, you could have north, midlands and south.

“The crowds are clearly really important, but we also have to look at a much wider aspect of how spectators watch and want to consume our sport.

“So, actually we know that big weekends do really well and we know that big venues like the Copper Box, where you’ve got the experience of Westfield and everything that comes with a trip to London, work well for a netball fan.

“I think that we can be far more creative as to how we do that [showcase the league]. Of course, ticket revenue is an important aspect but to move the sport forward, as Sara was talking about, that whole funding piece needs to be looked at and how teams are supported individually.

“I totally agree with Sara, why an earth would we want to take a step back at this point now? It’s been amazing, so let’s look at being really creative with how we keep the sport moving forwards, while working with both clubs and fans.”

Sky Sports is your home of netball. The Vitality Netball Superleague continues on Sunday with Round 12 and four matches back-to-back streamed on the Sky Sports YouTube channel from 12pm.