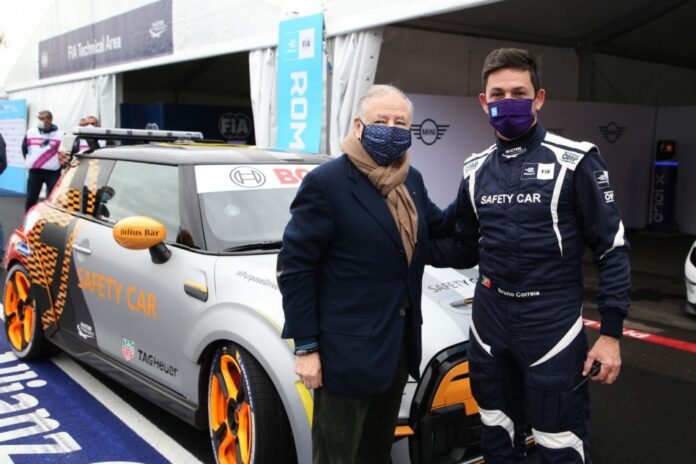 “The ABB FIA Formula E World Championship is the top electric racing series as well as an efficient way to promote urban sustainable mobility,” said FIA President Jean Todt. “The new Official Safety Car – the MINI Electric Pacesetter – is a case in point. As safety is one of the FIA’s top priorities, we’ve collaborated with BMW Group and Formula E to develop a car model to play this key role. I have had the pleasure to test it in Rome last weekend and its first outing has met the expectations. It has reminded me of nice memories as I started to compete in Rally in a Mini Cooper.“

In light of adverse weather conditions and races with some incidents, the new FIA Formula E safety car was called into action four times on its debut in Rome. “It is fantastic to have a fully electric car leading the Formula E field,” said the official FIA Formula E safety car driver Bruno Correia. “The MINI Electric Pacesetter is perfect for the narrow street circuits of the ABB FIA Formula E World Championship. The handling of the car is fantastic. And thanks to the modifications for use on the racetrack – for example, to the suspension and the brakes – the MINI is extremely fast and agile.”

The positive verdict of former racing driver Correia is a great description of the unique character of the MINI Electric Pacesetter inspired by JCW. In this instance, BMW Motorsport did not convert an existing road vehicle into the FIA Formula E Safety Car. Instead, the engineers used the new MINI Cooper SE as a basis to design a totally new safety car.

“We approached the project both in terms of safety and handling as if we were building a racing car, and started with the body in white of the MINI Cooper SE,” described Rudolf Dittrich, head of vehicle development at BMW Motorsport. “The result is a car that sets standards in braking power, cornering performance and agility. And it is precisely these areas that are crucial on the narrow street circuits in the ABB FIA Formula E World Championship.”