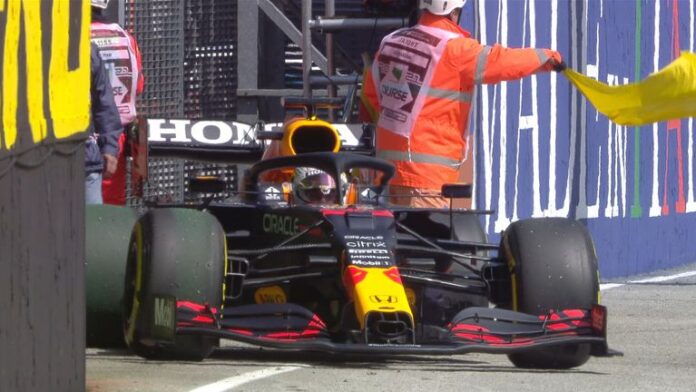 Friday’s running at Imola continued to produce drama into the afternoon session, with Verstappen’s issue the most significant of the opening day with the Dutchman restricted to just five laps in P2 with what the team suspect was a broken driveshaft.

Ferrari showed promising pace in fourth and fifth but Charles Leclerc crashed on his final run of the day at the second Rivazza.

Bottas, who claimed pole on F1’s last visit to Imola in November, pipped team-mate Hamilton to the fastest time of the session by 0.010s with a best lap of 1:15.551.

“So much better than Bahrain,” said Mercedes boss Toto Wolff to Sky F1. “I’m really happy to see that.”

Impressively, AlphaTauri’s Pierre Gasly – who qualified fourth here five months ago – was also within a tenth of a second of the lead Mercedes on the soft tyres.

Carlos Sainz was the quicker of the two Ferraris in fourth at the start of his second race weekend for the Italian team, with Leclerc lapping half a second adrift before his crash. Leclerc, however, did have a quicker lap time outlawed for track limits.

Perez was sixth but eight tenths off the leading pace. Former world champions Fernando Alonso (13th for Alpine) and Sebastian Vettel (15th for Aston Martin) were behind their respective team-mates out of the top 10.

Mercedes back on the up in cooler Europe climes

Although they ultimately triumphed over Red Bull at F1’s exciting season-opener three weeks ago, Mercedes remained adamant that their rivals edge a pace edge and were therefore wary about what would be in store at Imola.

Wolff said: “The car seemed together this morning and in the afternoon.

“Probably the temperatures help a little bit because that is where we were suffering particularly in Bahrain.”

Verstappen said the lost session had put the team on the back foot “a little bit” but “you know what you have to do anyway, so it should be alright”.