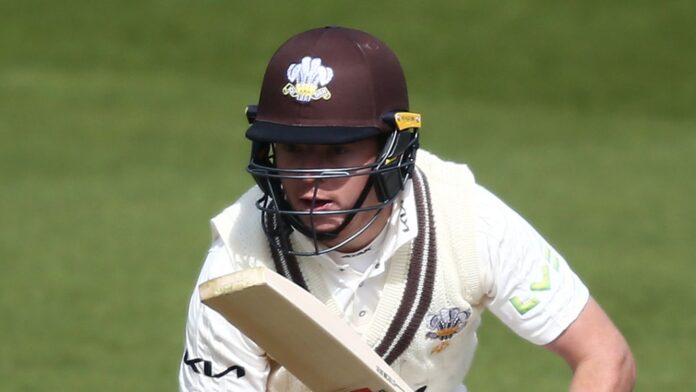 Pope (245) falls six runs short of a career-best as Surrey bid to force victory against Leicestershire; England captain Joe Root also made a century for Yorkshire, as they took control against Kent at Canterbury

Ollie Pope’s majestic double-century and a maiden championship hundred by Jamie Smith has given Surrey the chance to force victory against Leicestershire on the final day at the Kia Oval.

Surrey posted a mammoth 672-8 declared – their highest first-class total against Leicestershire – to secure a 297-run first innings lead, with Pope falling for 245 before Smith struck 123 from 148 balls to help tighten the hosts’ grip on proceedings.

Pope, resuming on 92, put on a 229 for the fourth wicket alongside Foakes (87) – a record against the Foxes at the Oval, while Jordan Clark clubbed four sixes as he finished 61 not out from just 54 balls.

However, Leicestershire’s openers Hassan Azad and Sam Evans provided a spirited rearguard, surviving 17 overs at the close, as the visitors head into day four 21-0, trailing Surrey by 276 runs.

Centuries from Sam Northeast and Ian Holland put Hampshire in a strong position to wrap up victory on Sunday in their match against Middlesex at the Ageas Bowl.

Northeast and Holland added 257 for the third wicket before James Vince declared half-an-hour before lunch – setting Middlesex an unlikely target of 531 for victory on day three.

The signs looked ominous for a three-day finish when the visitors were reduced to 33-3, having been dismissed for just 79 in their first innings on Friday.

However, a stand of 122 from Nick Gubbins (67) and Robbie White (73 no) for the fourth wicket gave Middlesex their first partnership of note to frustrate the home side, as the visitors closed on 208-4, with Holland making the earlier breakthrough.

Gloucestershire’s seam attack put them in sight of a first County Championship win at Taunton since 1993 on the third day of their match with Somerset.

With a first-innings lead of just three runs, the home side slipped to 149 all out in their second innings. Ryan Higgins led the way with 4-29, well supported by Matt Taylor (2-27) and debutant Dominic Goodman (2-19), as only James Hildreth (64) provided any resistance for Somerset.

Faced with a victory target of 153 and 10 overs left in the day, Gloucestershire lost Chris Dent as they finished on 28-1, with Craig Overton making the all-important breakthrough.

England captain Joe Root made 101 to help Yorkshire set Kent an improbable target of 445 to win their encounter in Canterbury.

Opener Adam Lyth (116) also hit a century while Root’s breezy innings was brought to its conclusion by the part-time spin of Joe Denly, who finished with 2-61.

After Yorkshire declared on 330 for five, Kent lost two wickets – including Zak Crawley – to close on 33 for two, with Jordan Thompson and David Willey picking up a wicket apiece.

Lancashire will go into the final day of their Group Three clash with Northamptonshire looking to chase down a victory with seven wickets required to seal a first win of the season, with Steven Croft’s unbeaten 103 the undoubted highlight for the hosts on Saturday.

That task got even tougher after Saqib Mahmood took two early wickets with a hostile spell of bowling, before Tom Bailey added a third to leave Northants 59-3 at close.

Elsewhere, Kiran Carlson scored his second hundred of the match as Glamorgan brought themselves back into the contest against Sussex.

Ollie Robinson claimed 4-59 for Sussex, who had forged a 196-run first innings lead, but his teammates failed to match his penetration, and Carlson’s latest century means Glamorgan go into the last day leading by 62 runs with five second-innings wickets in hand.

Bob Willis Trophy holders Essex have taken their Group One fixture with Durham into the final day and could pull off an unexpected win after they set the visitors 168 for victory.

Half-centuries from Paul Walter (77), England’s Dan Lawrence (76) and Ben Allison (52) got the hosts up to 330 in their second innings at Chelmsford, in spite of Brydon Carse’s five-wicket haul, and the visitors ended on 60-3 to set up a dramatic finale.

Warwickshire have a similar chase at Trent Bridge and need a further 248 runs with seven wickets in hand after Stuart Broad helped restrict them to 85-3 at the close.

The seamer took a solitary wicket while fellow England bowler Olly Stone caught the eye with 3-66 to bowl out Nottinghamshire for 260 in their second innings, setting a total of 333 for the away side to clinch victory.

Elsewhere in Group One, Matt Critchley continued to impress for Derbyshire and followed up a day-one hundred with a five-wicket haul to dismiss Worcestershire for 305 before he almost hit another century.

Critchley was dismissed for 84, but his score has helped the home side build up a 353-run advantage ahead of the final day.