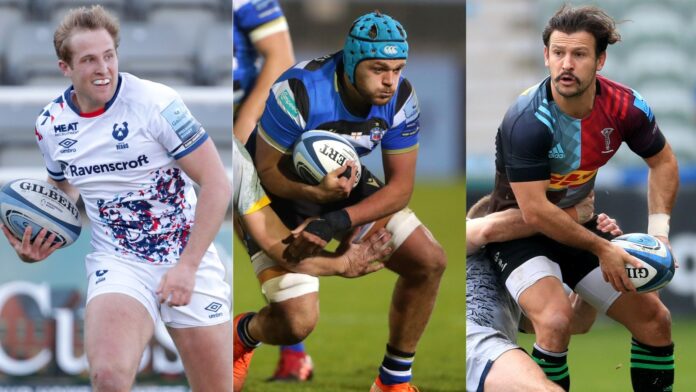 Ahead of the British and Irish Lions’ Test series vs the Springboks this summer, live on Sky Sports, we look at who is impressing as the window to catch Warren Gatland’s eye gets ever smaller. This week, we look at Bristol’s Max Malins, Bath’s Zach Mercer and Harlequins’ Danny Care.

We take a look at who impressed from the weekend’s club scene, viewing players through the spectre of potential British and Irish Lions tour selection…

In the absence of the superb Charles Piutau for Bristol, Malins has stepped up for the Bears at full-back during his loan spell from Saracens and excelled.

Indeed, the 24-year-old – who has picked up seven caps for England since November 2020, including a Six Nations start vs France – has been one of the form Premiership players in 2020/21, and was eye-catching again in Bristol’s 34-17 victory over Newcastle Falcons on Saturday.

Though Bristol fell 10-0 behind at Kingston Park, Pat Lam’s Bears stuck to their game-plan and method of playing, which was to keep the ball in hand and attack from deep.

Within this system, Malins thrives, particularly against tiring bodies, and on the half-hour mark he showed his ability: picking up the ball within his own half, he sprinted forward before selling Toby Flood with a dummy, and then also selling Falcons full-back Tom Penny with another dummy before running under the posts.

In the second period, Malins notched a second try as he claimed a bouncing ball within the Newcastle half and demonstrated his deceptive pace by searing through the Falcons defenders and over.

In all, Malins finished with 13 carries – no one on the pitch made more – 186 metres with ball in hand – by far the most of any other player – five defenders beaten, two clean breaks, two tries and the man of the match award.

In the likes of Stuart Hogg, Liam Williams and Anthony Watson, Gatland already has three top-class potential full-backs – albeit those three could also quite easily combine as a back-three in their own right – but Malins will have caught the eye for sure.

Malins is a player of versatility too, which could help his cause considerably.

It is perhaps due to the plethora of options and talent at Eddie Jones’ disposal in terms of back-row stocks, but for whatever reason, Mercer’s face hasn’t seemed to fit with the England picture over the last few years.

Despite routinely impressing for Bath at No 8 and blindside flanker, Mercer has just two Test caps and one start, both dating back to November 2018, in his career so far.

Still just 23, it is likely for the above reasons that Mercer is departing Bath for the Top 14 and Montpellier this summer, which will put his Test career with England on hold in any case.

That decision does not preclude him from representing the Lions, however.

For Bath vs the Leicester Tigers at the Rec on Sunday, Mercer and co were likely heading towards defeat, being six points down with less than two minutes to play. A late Will Muir try and fabulous Ben Spencer conversion stole a 21-20 victory for them, however.

If Bath as a collective were not at their best, the win was a just reward for the effort Mercer put in, with the No 8 fantastic.

Mercer made some 21 carries and 102 metres going forward – both statistics the most of anyone in the game. He also contributed eight tackles and beat a phenomenal eight defenders. He also claimed the man of the match award.

A true dynamic all-rounder, if Mercer can continue to try and fire Bath into the playoffs, he will further his cause to impress.

If there is one position in which Gatland is not blessed with a load of options of players in their best form, then it is at scrum-half.

Wales have had injuries to Tomos Williams, Gareth Davies and Kieran Hardy, Scotland’s Ali Price has been in and out, while England’s Ben Youngs and Ireland’s Conor Murray have both lacked consistency at times.

Though he may not have played for England since November 2018, experienced Harlequins scrum-half Danny Care has been in very good form this season.

The 34-year-old has developed into a leader, and has been a key man on the pitch as Quins have made a run for the Premiership play-offs.

Against Worcester at the Stoop on Saturday, Care ran the show as Quins put 50 past the Warriors.

The half-back scored the first try on four minutes, as he instinctively exploited a blindside that had been deserted by the Worcester defence, and the game was one-way traffic from there.

Still exciting, still pacy, and still more than capable of nailing the essentials. Care would be far from the worst option this summer based on form.