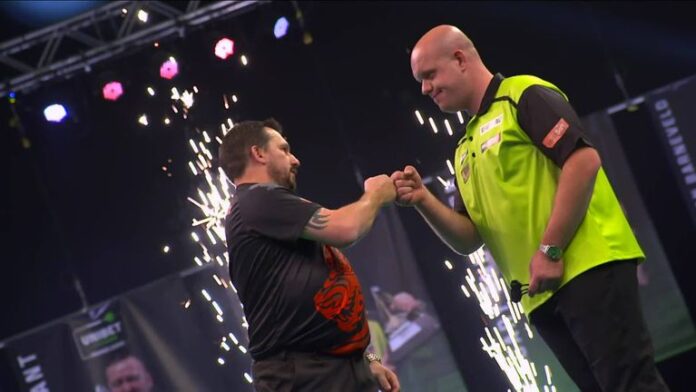 Originally scheduled to be Judgement Night, Thursday was re-branded simply as Night Nine following the early eliminations of defending champion Glen Durrant on Tuesday and Rob Cross on Wednesday – the pair met in the opening game where Voltage took the honours before the drama unfolded.

Aspinall, runner-up last year, tore past Anderson with a superb display that took him into first place, but Van den Bergh looked well placed to usurp him. However, a storming comeback from Wade earned The Machine a point that kept him in the top four and denied the Belgian a return to the top of the table.

Van Gerwen slipped to third after a 7-3 defeat to an inspired Clayton, while Jose de Sousa and Peter Wright shared the points on another night that underlined just how wide open this competition is this year.

As a result of listening to you and the wider darts community over recent hours we are changing ‘Judgement Night’ to ‘Night Nine’.

We made a mistake, and we apologise for it.

Stylish Aspinall too good for Anderson

Nathan Aspinall ended an impressive first half of the Premier League season on a high with a blistering display that inflicted a 7-2 defeat on Gary Anderson – the heaviest of the Scot’s campaign so far.

The Asp, who averaged 103 and hit seven of his 11 darts at double, is out to go one better than last year when he was beaten by Glen Durrant in the Premier League final in Coventry and with just a solitary defeat from his nine matches, he looks in the mood.

The Flying Scotsman stopped the rot with a 16-dart leg but Aspinall put the seal on a sparkling performance with a brilliant 102 finish that saw him over the finish line and temporarily into top spot.

Aspinall has lost just once and that was back on Night Two while Anderson – chasing a third Premier League title – is winless in three and has yet to register back-to-back wins in the competition.

Dimitri Van den Bergh looked poised to end the first phase of his debut Premier League campaign on top of the Premier League pile but 2009 champion James Wade had other ideas, battling back from 6-3 down to earn a share of the spoils.

The race for the play-offs is going to be incredible!

An entertaining encounter brought the first phase to a close as the pair shared the first six legs with both men eeking out a lead only to be pegged back.

Wade’s stirring 129 finish hauled him back onto level terms at 3-3 before Van den Bergh launched a trademark burst to take the lead and then break brilliant in 10 darts for the first two-leg advantage of the contest.

With The Dreammaker 5-3 in front, a roof-raising 160 earned him a third leg on the bounce and more importantly a guaranteed point, but with just one more needed for victory Van den Bergh wilted and Wade, as is his own trademark, pounced.

Dancing Dimitri is in the house! 🕺

The Belgian takes on the in-form James Wade in our finale!

The Machine first pulled within two, and then became the second player to fire six perfect darts as he threatened a nine-dart leg. He couldn’t complete the feat but still managed to break the Belgian’s throw to draw within one before securing a point himself with a classy 62 finish that left Van den Bergh second in the table.

Join us every fortnight for The Darts Show podcast where Colin Lloyd, Michael Bridge and Paul Prenderville ponder the talking points

Michael van Gerwen had roared his way to a spectacular win over Jose De Sousa on Thursday, but his inconsistencies returned as he averaged just 91 against a brilliant Jonny Clayton, who returned to winning ways.

The Ferret had started this week’s resumption top of the table, but so close is the competition that he started Thursday’s action in eighth spot despite being the only man to average more than 100 for the competition.

After claiming the opening leg with a clinical 72 finish, Clayton doubled his advantage after MVG missed four darts to level. He took a third leg in succession to rubberstamp his fast start as a foundering Van Gerwen got on the board with a 17-darter.

When Clayton missed a dart at bullseye for the first 170 of the tournament, it left the door ajar and with a bellowing roar, five-time Premier League champion MVG smashed through it, taking out 129 to post his second leg of the match.

But Clayton stayed in front, winning the next two to ensure he would not be beaten thanks to a classy 72 finish. The Welshman missed two darts for a 7-2 win and Van Gerwen mopped up but there was to be no further reprieve as Clayton ended a run of three games without a win.

Peter Wright and Jose de Sousa played out an entertaining 6-6 draw that left both reflecting on a missed opportunity to move into the top-four places.

De Sousa’s three-match winning streak was halted on Wednesday against a rampant Michael van Gerwen and he was up against it as Snakebite struck first with an early break of throw that he backed up by holding his own advantage to establish a 3-1 lead.

But The Special One is capable of special things and he hit back with 14 and 13 dart legs to level things up at 3-3.

With nothing between the pair, five of the first nine legs were won against the throw and it looked like Wright had struck a decisive blow when he held onto his own throw for a 6-4 lead that earned him a point.

The pair shared 14 maximum 180s – with De Sousa’s tally of seven taking him beyond 50 for the tournament – and having drawn within one he fired in two in the final leg as he went six darts of the way to a nine-darter.

Having hit one against Jonny Clayton earlier in the tournament, he came up short of a perfect leg, but stood firm to secure a share of the spoils.

Glen Durrant became the first player to lose all nine matches as his defence of the Premier League crown came to an end with a 7-5 defeat to Rob Cross that left Duzza without a point in the tournament.

Both players had been eliminated across the last two nights, and while both flickered they had the look of being resigned to the fate as the night got underway.

It was Durrant who nosed in front in the early exchanges, a 110 finish the highlight as he crept into a 3-2 lead only for Voltage, who was also eliminated after the first phase last year, to level with a 10-dart leg.

The Nightmare is over

The journey has just begun

Only once before over the previous eight nights had Durrant won four legs, and he matched that tally when he pinned double top once again to level at 4-4. During his league-phase winning campaign last year, Durrant would usually strike from this point but it wasn’t to be as Cross claimed the next two to first ensure he would not be beaten.

He then made it the maximum two points after Duzza took some solace when he won the 11th leg to reach five for the first time in his campaign but both men head home with work to do.

Don’t miss an arrow as Premier League Darts continues on Wednesday May 5 from 7pm on Sky Sports Action – and stick with us through the week for updates, interviews and reaction from the start of this year’s competition