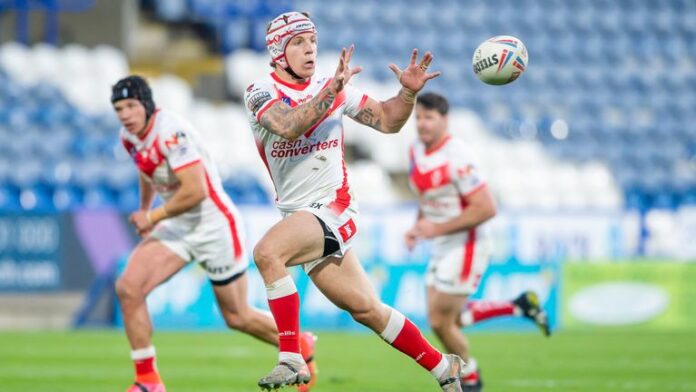 Despite an improved performance, the Giants could not stop St Helens who remain top of the Super League table

St Helens remained unbeaten at the top of the Betfred Super League after seeing off struggling Huddersfield 18-10 in a tight encounter at the John Smith’s Stadium.

The defending champions notched their fourth victory in a row this season thanks to tries from Theo Fages, Mark Percival and Jonny Lomax.

The Giants are still searching for their first league win of 2021 under new coach Ian Watson.

Lachlan Coote’s bomb was taken in the air by Welsby and his brilliant one-handed offload was snapped up by Fages to score. Coote added the extras to put the visitors 6-0 ahead early.

The Giants went close to fashioning a response soon after, but several errors let them down.

St Helens had all the field position in the opening stages, but the home team’s defence kept them at bay.

In the 29th minute, play was stopped when Huddersfield hooker Adam O’Brien needed treatment for a head knock, with James Cunningham returning to take his place.

In the next set, Saints went close to scoring from Fages’ grubber kick, but Matty English was on hand to clear the danger.

With nine minutes left in the half, Kyle Amor was held up over the line after he burrowed over from Fages’ pass.

In the 36th minute, a smart kick from Percival forced a goal-line drop-out and the pressure finally paid off when the centre exploited an overlap on the right in the next set to cross untouched. Coote nailed the conversion to make it 12-0 at half-time.

In the second half, the Giants started brightly when Jack Cogger landed a 40-20.

Soon after, McQueen dived over from Aidan Sezer’s pass to put Huddersfield on the scoreboard and back in the contest. Sezer missed the conversion, however, leaving Saints 12-4 ahead.

Attacking opportunities were rare, with defence dominating the match, but in the 62nd minute a smart dummy-half run from substitute Lewis Dodd set up Lomax for a try. Coote added the extras to give the visitors an 18-4 lead.

Jermaine McGillvary then gave the Giants hope when he scored with nine minutes left on the clock, touching down off Cogger’s pass to make it 18-8. Sezer slotted his kick from the sideline to cut the buffer to 10 points.

Huddersfield battled hard in the final stages but it was not enough, as St Helens held off a late charge from the home side to maintain their unbeaten record.