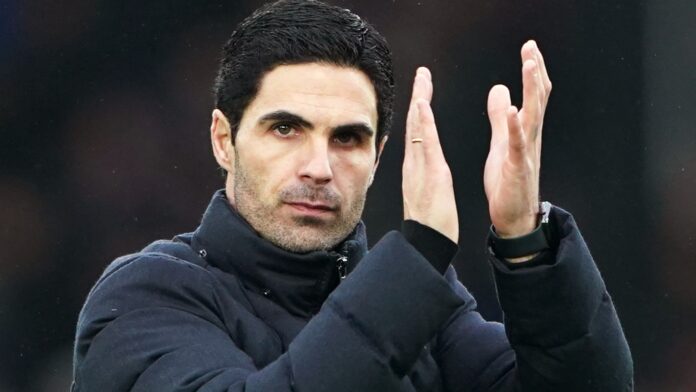 Arsenal boss Mikel Arteta says he is “pretty positive” that Pierre-Emerick Aubameyang will return before the end of the season as the club captain continues his recovery from malaria.

Aubameyang contracted the disease while on international duty with Gabon at the end of March, and played in Arsenal’s first two matches after the international break before becoming unwell.

Arsenal initially said Aubameyang’s absence was due to “illness”, but the striker took to Instagram on April 16 to provide further details, in which he said he hadn’t been “feeling myself the last couple weeks but will be back stronger than ever soon!”

The Gunners beat Slavia Prague to advance to the Europa League semi-finals without Aubameyang and next week are due to face Villarreal in the first leg of their last-four tie, which appears to be the club’s best opportunity of securing European football next season with their domestic form remaining inconsistent.

“I have spoken to him many times,” Arteta told Sky Sports News on Thursday. “He was at the training ground yesterday for the first time.

“He’s still being checked by the doctors, it’s taking him a while. It’s a difficult disease to go through. He had some tough moments and we just want to give him every single tool to make him available and fit as quick as possible, because we need him.”

Asked if he was confident in Aubameyang – who has scored 14 goals in 33 appearances in all competitions during the club’s 2020-21 campaign – playing again this season, Arteta said: “Well I hope so.

“The way he was looking yesterday, he was in a much better place and hopefully once he has started to feel better with more and he regains a bit of the weight that he’s lost, he’s going to be able to train and at that moment with the desire that he has to be back, I’m pretty positive that that will be the case.”

A frustrating draw at home to Fulham on Sunday left Arsenal nine points behind fourth-placed Chelsea and seven points back from seventh-placed Liverpool, leaving this season’s Europa League as their most likely route back into Europe next season.

However, Arteta is insistent that he will not prioritise European games, with Friday evening’s trip to face Everton at Goodison Park occupying all his focus.

“I don’t believe much about prioritising,” Arteta said.

“I think football is about confidence, it’s about momentum – a state of mind that you are in.

“And the best way to approach the Villarreal game is to win at Everton, having a good performance, playing well individually and collectively, and then we’ll be in a much better place to go and try to be in the final of the Europa League.”

The message is that there’s still a lot to play for. Every game is a must-win for us and we have the opportunity to win a trophy that would dramatically change our season and next season. That is a big objective, obviously.

Arteta: Kroenke has apologised to me over failed Super League

Arteta revealed earlier on Thursday that Arsenal owner Stan Kroenke and chief executive Vinai Venkatesham have apologised to him and the players over the club’s plans to join the collapsed Super League.

On Sunday night, Arsenal announced they were one of 12 clubs – along with the rest of the Premier League’s ‘Big Six’, plus Real Madrid, Atletico Madrid, Barcelona, Juventus, Inter Milan and AC Milan – intending to form a new midweek European competition.

However, the plans were met with fury by supporters, leagues and governing bodies across Europe, and by Tuesday night, Arsenal and the other five English sides had withdrawn from the league.

In an open letter, the Arsenal board told supporters that “we made a mistake, and we apologise for it”, and when asked if the same message had been passed on to him, Arteta said: “Yes, starting from Vinai, the ownership and everybody that is involved in the process.

“All of them with the right intentions to defend the club, and put the club in the best possible position for now and for the future. But accepting that the way it’s been handled has had terrible consequences and that it was a mistake.

“I have to really respect that when people have genuine intentions to do the best for this football club but, if it’s not the right thing to do, they can apologise. I think the players, staff and everybody working at the club has to accept that and move on.”

Arteta was then asked whether Kroenke – or his son Josh Kroenke, who is a director at Arsenal – had directly apologised to him, and the head coach said: “Yes, absolutely.

“Obviously they are the maximum responsible to run the football club. They apologised for disturbing the team, not having the capacity or ability to communicate in a different way earlier and explained the reasons why.

“And they passed on a message to the players. That’s all you can ask for, and I have to accept it.

“I spoke with them yesterday [Wednesday]. As always, every time we need something and every time something is happening, they are straight away ready to act, to give the answers they can and give the support they can.”