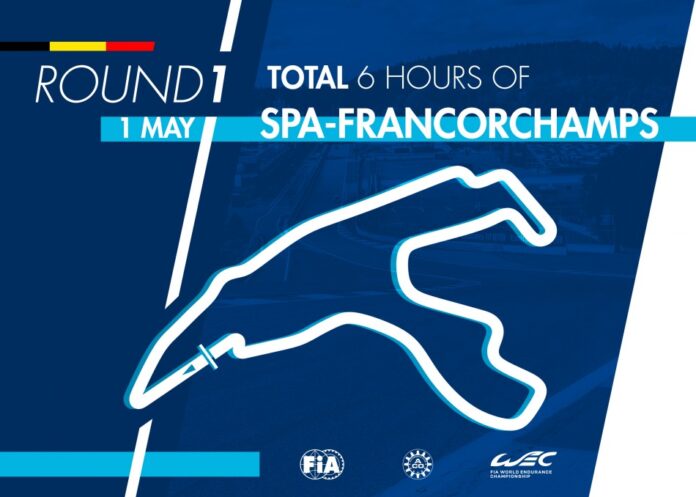 The opening round of the six race 2021 FIA World Endurance Championship will take place in Belgium at Spa-Francorchamps on Saturday 1 May.

THE PROLOGUE 2021
The official two-day test at the start of the season will take place at Spa-Francorchamps on Monday 26 and Tuesday 27 April, with four track sessions totalling 11 hours and 50 minutes of track time for all the competitors.  The Prologue will be the first time the new Hypercars will be seen on track in an official event, and it will also provide the first opportunity to see the new 2021 liveries.

FIRST SEASON OF HYPERCAR
The 2021 season will see the introduction of the new Hypercar class.  The incoming ruleset represents a major shift in philosophy compared with the LMP1 class it is replacing. It allows for far greater variety in terms of technical approaches, at the same time preventing cost escalation. The Hypercars will battle it out for the overall honours in the FIA WEC and at Le Mans, however, this season, under the grandfathering rule, non-Hybrid LMP1 cars are also allowed in the Hypercar category.

SINGLE AERO KIT
In order to mirror the Hypercar category and harmonise performance level between the two classes of cars, the Le Mans aero kit has been made mandatory across the whole season in the LMP2 category.

NEW QUALIFYING FORMAT
There are two distinct 10‐minute sessions, one for Hypercar/LMP2 and the other for LMGTEs

“Since it was introduced in 2012, the FIA World Endurance Championship has been continuously evolving. Yet, the changes we’re set to witness this year are something unseen to date.

“It’s definitely an exciting, but also immensely challenging time, and the fact that this transition coincided with the outbreak of a global health crisis only adds to the challenge.

“Fortunately, as the President of the FIA Endurance Commission, I have the privilege of working with an excellent group of professionals from the ACO, the promoter of the FIA WEC and of course the FIA itself. “It is the knowledge, expertise and determination of the individuals involved that gives me confidence that endurance racing is in good hands and future looks bright for this form of motor sport.

“I’m pleased, looking at this season’s entry list. The FIA WEC managed to attract a strong and diverse grid, which is something particularly impressive in the wake of the current health and economic climate. There will surely be numerous fascinating storylines over the course of the season. We’ll witness a milestone in the history of endurance racing with the debut of the world’s first Le Mans Hypercar.

There are also several strong lineups entered in LMP2 and LMGTE machinery and we can expect fierce competition in these categories. It’s also great to see the two all-female crews, who competed at Le Mans last year, stepping up to the FIA WEC full time.

“With the LMH concept, we took a lot of risks and a lot of effort and perseverance went into defining the regulations so that they capture the spirit of what we wanted LMH to be, and that is to allow for various philosophies in terms of technical approaches and aesthetics of the cars. Today we can be satisfied with the achieved results, with more and more renowned brands committing to this new ruleset.  LMH should please both manufactures and fans, resulting in spectacular cars and high level of competition. The more cost-effective regulatory approach is also something much needed in the current economic climate.

“I’m very much looking forward to this season and beyond. We’re fortunate to witness history being made and we’re on the verge of an immensely interesting era of endurance racing. I’d like to wish all the best to everyone involved in the FIA WEC this season.”

ROLL OF HONOUR – 6 HOURS OF SPA-FRANCORCHAMPS

Love up for the Cup on Sunday

“Digitalization is the way of the new life and the new...