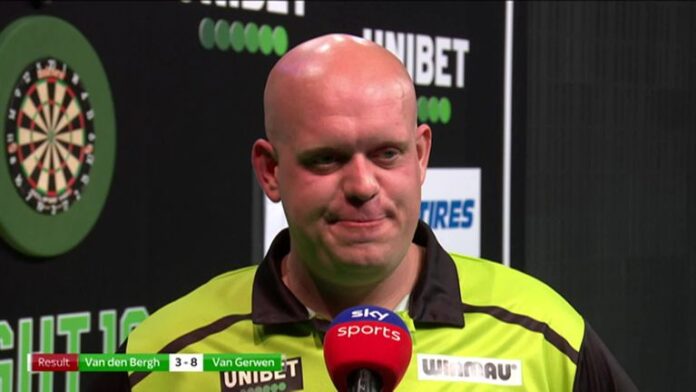 Michael van Gerwen served up a vintage display to beat Dimitri Van den Bergh and move into second place in the Premier League behind Nathan Aspinall.

Van Gerwen has been wildly inconsistent across the season and is without a title since the Players Championship Finals in November, but he triumphed in a high-class contest with Van den Bergh to leapfrog the Belgian in the standings.

On the first of three nights as the Premier League Darts second phase got underway, Van Gerwen’s 109 average was the performance of the evening where Jonny Clayton, Jose De Sousa and Aspinall chalked up victories.

However, last year’s runner-up Aspinall maintained his position at the top of the table, opening up a two-point advantage as he stormed back from 4-2 down to beat Peter Wright in the final match of the night.

Michael van Gerwen delivered his best performance of the Premier League so far, to inflict just a second defeat of the campaign on Dimitri Van den Bergh.

Five-time champion Van Gerwen missed out on the top four last year – the first time he has ever missed the play-offs – and has been dogged by inconsistency, but an 8-3 triumph over the Belgian delivered an early message in the second phase.

The Dutchman wasted little time in asserting the sort of authority that has been missed, taking out 123 for a break of throw in the opening leg which he consolidated with a 13-dart hold of throw.

A third three-figure finish in three legs gave MVG another break of throw and he powered on with a spectacular 11-dart leg, via a 91 finish, handing him a 5-0 lead.

He moved within a leg of a guaranteed point when he cleaned up 52 in two darts but to Van den Bergh’s credit, he was averaging 108 himself and had only been afforded one dart at a double.

Having missed his first, he made no mistake with his second to get on the board and he followed up with a clinical 82 finish to trail 6-2, and he claimed a third on the spin to draw within three – averaging more than Van Gerwen.

But Van Gerwen completed the victory by claiming the next two legs in just 24 darts for a stunning win that he will hope to turn into a sustained run of form. Having averaged 107 in a victory over Rob Cross earlier in the competition, he followed up by averaging 90 in defeat to James Wade.

Nathan Aspinall won six of the last seven legs to secure his third successive victory and extend his unbeaten run to eight games with an 8-5 win over Peter Wright.

The Asp was beaten by Glen Durrant in last year’s final, but looks good value to be in contention come the play-offs after a superb performance that extended his advantage at the top of the table to two points over Van Gerwen and Van den Bergh.

A low-key start to the contest saw the pair share the opening four legs before Snakebite landed the first break of throw when he pinned double four to open up the first two-leg advantage at 4-2, but that proved to be the catalyst for Aspinall who reeled off the next three.

The Stockport man broke back immediately in 13 darts to kickstart his burst and having consolidated the break he claimed another leg against the throw with a sensational 161 finish on the bullseye.

He moved to within a leg of a point when he cleaned up 83 and he guaranteed a share of the spoils that ensured he would be top when Wright wasted four darts to draw within one leg.

Snakebite staved off the threat when he broke to trail 7-5 but Aspinall produced a blistering 11-dart break himself to seal what could prove to be a vital two points.

Jonny Clayton defied a perfect finishing record from James Wade, to seal an impressive 8-5 victory that moved him back into the play-off places.

The Ferret, who has already topped the table in his Premier League debut year, had slipped out of the top four after just one win from his last four matches, but he averaged 105 and took out a pair of huge finishes on his way to victory.

Wade had played some of his best stuff into moving into play off contention on the back of four successive 100+ averages, but despite hitting all five darts at the outer ring for a 100 per cent finishing record, he ran out of time against Clayton’s power scoring.

The Welshman’s early finishing – bar a 150 check-out for a break of throw – gave Wade the chance to lead and in trademark fashion the Machine took every opportunity to lead 3-1.

However, Clayton hit back with a four-leg burst of his own to lead 4-3, a 134 finish via a pair of double tops the highlight.

The pair traded legs until Clayton struck the decisive blow to lead 7-5 thanks to a 15-dart break of throw that secured a point.

The Portuguese had lost just one of his last six to move off the bottom of the table and into play-off contention, and he carried on where he left off with an emphatic 8-3 victory that leaves Anderson bottom and three points adrift of the play-off places.

De Sousa did the damage early on, storming into a 5-0 lead with Anderson missing a host of darts at double before he finally hit the target with his 10th dart at the outer ring to get on the board in the sixth leg of the contest.

Anderson claimed two of the next three to hint at a comeback and draw within three, but De Sousa was not to be denied as back-to-back 14-dart legs crushed any hopes of Anderson’s comeback.