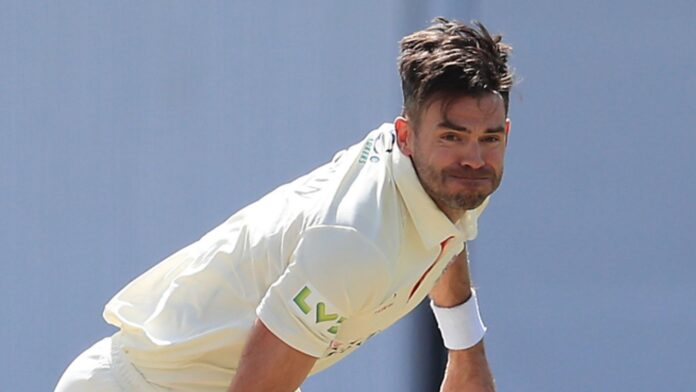 James Anderson picks up the wicket of Australia batsman Marnus Labuschagne for 12 in his first game of the summer for Lancashire; Stuart Broad dismisses former England Test captain Alastair Cook for three as Nottinghamshire bowl Essex out for 99

England’s all-time leading wicket-taker James Anderson, playing in his first game of the summer of Lancashire, struck an early blow ahead of this winter’s Ashes on day one of their LV=Insurance County Championship clash with Glamorgan.

Anderson claimed the prized wicket of Australia batsman Marnus Labuschagne for 12, nicking behind, shortly after lunch.

Poor weather blighted the rest of the day’s play, with David Lloyd (78) compiling a battling half-century in between the showers as Glamorgan finished up 117-3 off the 39 overs possible.

Keep up-to-date with the latest scores from day one of the #LVCountyChampionship – incl. clatters of wickets at Trent Bridge & the Ageas Bowl

Anderson returned figures of 1-22, and seven maidens, from his 13 overs in the day.

Crawley came to the crease after six balls following the early departure of Kent captain Daniel Bell-Drummond for four. His 171-ball innings, containing 13 boundaries, underpinned the visitors’ score of 224-7 by stumps.

Jack Leaning contributed 47 lower down the order, and wicketkeeper Ollie Robinson 38, while Ben Coad (3-45) and Steven Patterson (2-33) were the pick of the bowlers for the home side.

Sanderson, 32, (5-28) and 40-year-old Berg (5-18) both returned five-wicket hauls as Sussex were skittled for 106. And it could have been much worse, with the visiting side 25-7 at one stage, before England Test hopeful Ollie Robinson cracked an unbeaten 49.

Robinson then claimed 4-31, but Northants closed well-placed on 214-5 – leading by 108 runs – thanks to Rob Keogh’s 66 and Saif Zaib’s unbeaten knock of the same score.

Nottinghamshire seamer Luke Fletcher claimed a career-best 6-24 as title-holders Essex were bowled out for 99 on the opening day of their meeting at Trent Bridge. SCORECARD

Fletcher, who bagged 5-28 against Derbyshire last week, took his wickets in two spells, the second bringing him 5-11 in seven overs, including bowling a triple-wicket maiden!

Keep up-to-date with the latest scores from day one of the #LVCountyChampionship – incl. clatters of wickets at Trent Bridge & the Ageas Bowl

Nick Browne hit 53 at the top of the order for Essex, while his partner, former England captain Alastair Cook, lost his wicket to former team-mate Stuart Broad – edging behind for three.

Essex lost their last six wickets for 19 in a dizzy hour after lunch, rewarding Nottinghamshire’s decision to bowl first on a green pitch.

In reply, Nottinghamshire lost their first four wickets for 84, despite 49 from opener Haseeb Hameed, as Zimbabwe-born Dutch seamer Shane Snater (3-54) took three wickets in only his second Championship match.

But Lyndon James (42no) and Steven Mullaney (63no) steered the home side through to stumps with an unbroken century stand, Notts closing on 188-4 with a lead of 89.

In the other Group 1 fixture, Rob Yates’ second century in successive innings at Edgbaston lifted Warwickshire to 271-7 on the opening day of their game against Worcestershire. SCORECARD

The 21-year-old opener followed up his match-winning, unbeaten 120 against Essex with a resolute 104 off 229 balls, which held together an innings that was wobbling at 154-4.

A fighting half-century from Somerset skipper Tom Abell helped earn his side a 63-run lead over Hampshire on an eventful opening day at The Ageas Bowl that saw 15 wickets fall. SCORECARD

Abell was unbeaten on 52 – steering his side to 142-5 – after Hampshire were earlier bowled out for just 79, having been put into bat on a spicy pitch in chilly and cloudy conditions

Lewis Gregory was the pick of the Somerset attack, taking 4-26, as the hosts were dismissed inside 41 overs less than an hour after lunch.

It was the first time since 1969 Hampshire had posted back-to-back sub-100 run first-innings totals following their 92 all out last week against Surrey.

Elsewhere in Group 2, Robbie White registered his fourth consecutive half century to hold Middlesex‘s innings together as they were bowled out for 210 on day one of their game against Gloucestershire at Lord’s. SCORECARD

White was the only batsman to look comfortable against Gloucestershire’s seam attack, but he was denied another tilt at a maiden first-class hundred after being left high and dry, unbeaten on 76.

In reply, the visitors lost captain Chris Dent for 10, run out attempting a rash single two overs before the close of play. They will resume their first innings at 19-1 on the second morning.

Centuries from Sam Evans – his third in as many matches – and Australian Marcus Harris saw Leicestershire build the foundations for a big first innings score before Surrey fought back on an absorbing first day of their clash. SCORECARD

Leicestershire closed the day on 303-6, with wicketkeeper Harry Swindells unbeaten on 25.

Watch continued coverage of the Middlesex stream of their County Championship game against Gloucestershire, live on Sky Sports Cricket from 11am on Friday.