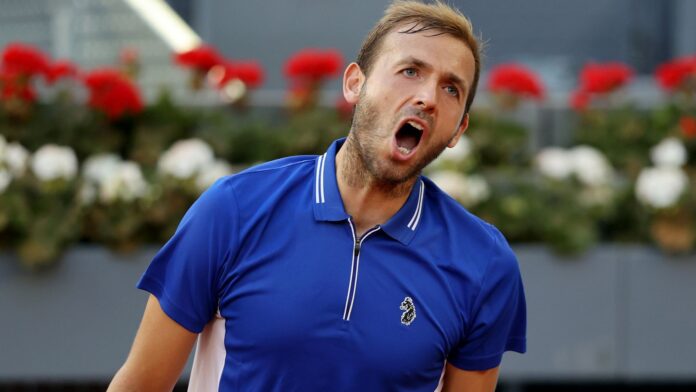 British No 1 Dan Evans sees his impressive recent run on clay come to an end at the hands of Alexander Zverev, while Rafael Nadal stays on course for his sixth title in Madrid; world No 1 Ashleigh Barty continues her winning streak to reach the women’s final

Dan Evans’ winning run at the Madrid Open came to an end on Thursday as Rafael Nadal eased through to the quarter-finals while Ashleigh Barty reached the women’s final.

British No 1 Evans missed out on a place in the quarter-finals and a meeting with Nadal, after a 6-3 7-6 (7-3) defeat by Alexander Zverev.

But the German world No 6 soon got into his stride as Evans complained about the lights inside the Manolo Santana Stadium.

Zverev broke back twice to race into a 4-1 lead and took the opening set with his first ace of the match.

There was a bizarre delay before the start of the second set as officials investigated a burning smell at the back of the court. It was decided to play on and at 4-4, Evans confidently fended off the only break point of the set.

But Zverev proved too strong in the tie-break and went on to claim victory in an hour and 37 minutes.

Nadal stayed on course for a sixth title in the Spanish capital after a comfortable victory against Alexei Popyrin.

After defeating Spanish heir apparent Carlos Alcaraz on Wednesday, Nadal took on another young gun in Australian Popyrin, who had upset Jannik Sinner in the second round.

Popyrin won the first seven points of the match but was unable to find the consistency needed to really trouble Nadal and the top seed eased to a 6-3 6-3 victory.

Nadal has not been as dominant in Madrid as the other big clay tournaments, with the altitude less favourable to his style of play, but he remains the clear favourite.

The 34-year-old said: “Today it’s true that there is a lot of young, good players. It’s something normal that is happening. I’m excited that at my age I am able to keep playing against all of them. They are good. They are talented. They have a great future.”

Third seed Dominic Thiem continues to look refreshed after more than a month out, with the Austrian seeing off Alex De Minaur 7-6 (9-7) 6-4, saving a set point in the opener.

“For me, it was perfect because obviously he’s first of all a top player and second of all he also likes to play longer rallies,” said Thiem.

“There were some good, long rallies. I was many, many times out of breath. It was perfect for me to get back a little bit the match rhythm, to run down a lot of balls.”

World No 1 Barty continued her winning run on red clay by reaching the final of the Madrid Open.

The Australian has not lost on the surface since Rome in 2019, winning the French Open title that year and the Porsche Tennis Grand Prix in Stuttgart last month.

She has won 17 of her last 18 matches, with the only defeat coming on green clay in Charleston against Paula Badosa. But the Spaniard was second best on home soil on Thursday, with Barty triumphing 6-4 6-3.

Barty did not play a match for nearly a year because of the coronavirus pandemic, and she said of her brilliant form: “I think a lot of the confidence I’ve gained this year was from the work that I’d done with my team prior to even playing my first match.”

Of her prowess on red clay, the Australian added: “I’ve learnt a lot more about it, without a doubt. I promise you, I’m still counting down to the grass-court season. It’s one of my favourite times of the year.

“I think the memories and the learnings now that we’re getting from the red clay has been really cool, to be able to challenge myself in different ways.”

Badosa was the first Spanish woman to reach the semi-finals in Madrid, and she will break into the top 50 for the first time on Monday.

The 23-year-old said: “It’s been an amazing week. Very positive one. Today was a tough match.

“I think she played a very good level. She’s very talented. She’s an amazing player. I think she can’t lose a match recently. Today I saw why.”