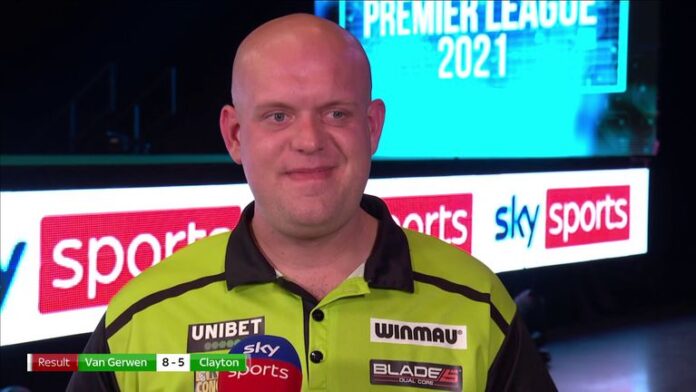 Dimitri Van Bergh beat Nathan Aspinall and Michael van Gerwen continued his return to form as a logjam formed at the top of the Premier League table on Night 11.

Aspinall had kicked off the evening top of the pile, but he was beaten by in the first match of the night by Dimitri Van den Bergh, who moved level on points with The Asp but behind him on leg difference.

It opened the door for Van Gerwen to hit top spot for the first time since Night Two but he fell short despite a win over Jonny Clayton that moved him level with Aspinall and Van den Bergh on points, but behind Aspinall on leg difference.

The evening’s fixture list had pitched the top four all against each other, and with one night’s action to go before the final week at the end of the month, the trio at the top have now moved three clear of everyone else.

Michael van Gerwen moves level on points with Nathan Aspinall at the top of the Premier League!

After his blistering victory over Dimitri Van den Bergh on Wednesday, Michael van Gerwen had to dig deep for a battling 8-5 win over Jonny Clayton that did not reach the heights of his 109 average but still secured a valuable two points.

Van Gerwen took the first and Clayton took the second – missing a dart for a dazzling 167, but returning to pin the required double for early parity.

The Ferret, who has won five of his last seven meetings against Van Gerwen, landed the first break of throw when he punished the Dutchman’s missed dart at double top.

But Van Gerwen looked to have turned a corner on Wednesday in his win over Van den Bergh and a superb 117 finish – with Clayton waiting on 40 – gave him an immediate break back.

The fifth leg was vital as MVG missed four darts for a 3-2 lead only to see Clayton miss three of his own and after tidying up for the lead, Van Gerwen returned to break the Welshman. But inconsistency has dogged the Dutchman and without having to work hard, Clayton was level himself.

The see-saw nature of the contest continued, but Van Gerwen’s three-leg burst saw him move 7-4 ahead as the six-time champion held on for just his second back-to-back wins of the competition.

Dimitri Van den Bergh again proved to be Nathan Aspinall’s nemesis as the Belgian inflicted The Asp’s second defeat of the Premier League – both at the hands of the Dreammaker.

Van den Bergh had walked into a Van Gerwen tornado on Wednesday but, as is often the case, took everything in his stride to withstand a 103 average and six maximums from Aspinall.

A high-class start to the match saw Van den Bergh, inspired by a brilliant 120, strike the first blow when he broke in the third leg and consolidated to lead 3-1.

That early break was to prove decisive, as Aspinall never got closer than one leg and never broke the World Matchplay champion despite outscoring him and taking out a classy bullseye finish himself along the way.

Van den Bergh proved ruthless on the outer ring, taking every chance that came his way with a succession of clinical finishes, including an ice-cool 136 as he continued to maintain the narrowest of leads.

He secured a point when he held his own throw for a 7-5 lead and then missed a dart for victory in the following leg before producing a clinical display in the 14th leg to seal an 8-6 win.

Jose de Sousa threw away a gilt-edged chance to claim two priceless points as he allowed James Wade to battle back from 6-2 and 7-5 down for a 7-7 draw that keeps both men outside the top four and looking in.

The Portuguese thrower, making his Premier League debut this year, had beaten Wade in the first phase and also claimed his maiden major title against ‘The Machine’ when he lifted the Grand Slam of Darts title last year.

He wasted little time in asserting his advantage during a start that saw him move from all-square at 2-2 to a 6-2 lead – just two legs away from the full two points.

But 2009 champion Wade is made of stern stuff and, having been called up as a late replacement for Gerwyn Price, he is taking the opportunity to remain in the hunt for another televised title.

Wade fought back to draw within one at 6-5 before De Sousa stopped the rot and scrambled to a guaranteed point with a scrappy 20-dart hold of throw.

De Sousa then missed two darts for the match and, in trademark fashion, Wade pounced to first draw within one and after De Sousa missed another match dart, he cleaned up 70 for a share of the spoils.

Gary Anderson returned to winning ways with an emphatic 8-3 success against his former World Cup partner Peter Wright, who appeared to be struggling with a shoulder injury.

Despite their status as world and multiple major champions, the pair were languishing in seventh and eighth respectively ahead of the contest, but ‘The Flying Scotsman’ produced his best performance of this year’s Premier League to leapfrog his compatriot.

Wright opted for a change of points midway through leg five but it did not have the desired effect as Anderson stretched his lead, which he extended further courtesy of a two-dart 72 kill in leg eight.

The two-time world champion guaranteed himself a point with a third 13-darter in leg nine, only to squander match darts in leg 10.

It proved immaterial, however, as Wright was unable to produce a 126 skin-saver, and Anderson capitalised to prevail with a 74 outshot and an impressive 104.63 average and five 180s.