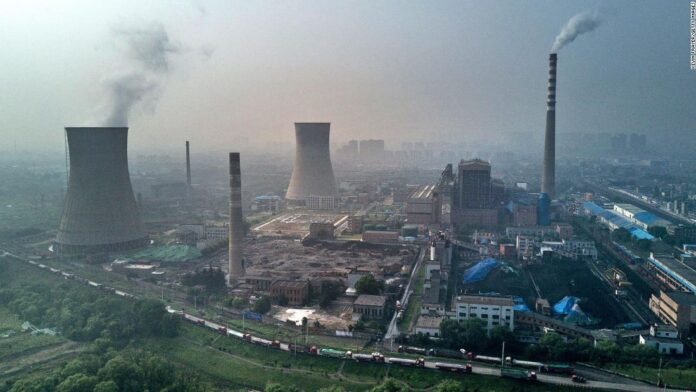 Chinese President Xi Jinping has vowed to make his country carbon neutral by 2060, and climate policy is seen as a major area of cooperation — and even competition — between the United States and China.
But the new report highlights how difficult reducing China’s impact on the climate could be.
According to the researchers, global emissions reached 52 gigatons of CO2-equivalent in 2019, an increase of 11.4% over the past decade. And China’s share is growing fast.
While China’s emissions were less than a quarter of developed country emissions in 1990, they have more than tripled over the past three decades, the report said. In 2019, they exceeded 14 gigatons of CO2-equivalent for the first time.
“China alone contributed over 27% of total global emissions, far exceeding the US — the second highest emitter — which contributed 11% of the global total,” the report said. “For the first time, India edged out the EU-27 for third place, coming in at 6.6% of global emissions.”
China is a large country, with a population of 1.4 billion, and up to now its per capita emissions have remained considerably lower than those in the developed world, the researchers note. But that, too, is changing fast.
“In 2019, China’s per capita emissions reached 10.1 tons, nearly tripling over the past two decades,” the report said.
While they remained lower in 2019 than the US — 17.6 tons a person — the report predicts that when full 2020 data is available, China’s per capita output will have overtaken the OECD average of 10.5 tons, even as the emissions “from almost all other nations declined sharply in the wake of the Covid-19 pandemic.”
Nonetheless, China still has a way to go before it catches up with the total amount of carbon dioxide that has been spewed into the atmosphere by developed nations. The report notes that “since 1750, members of the OECD bloc have emitted four times more CO2 on a cumulative basis than China.”
Greenhouse gases accumulate in the atmosphere like a blanket, trapping radiation that would otherwise escape into space. This causes temperatures on Earth to rise, which is linked to more extreme weather, ice melt and a rise in sea levels. And the more carbon emitted into the atmosphere, the more the planet will warm.
Reinhard Steurer, a climate scientist and associate professor at the University of Natural Resources and Life Sciences in Vienna, told CNN that those in the West shouldn’t be congratulating themselves just yet.
“A lot of the stuff we [in the West] consume is produced in China and the emissions are counted into the Chinese carbon emissions record,” he said.
“If you take into account those consumption-based emissions, our record isn’t that good… We should never really blame China as the worst emitter on earth, because quite a lot of their emissions go into our consumption.”

CNN’s Nectar Gan and James Griffiths contributed to this report.