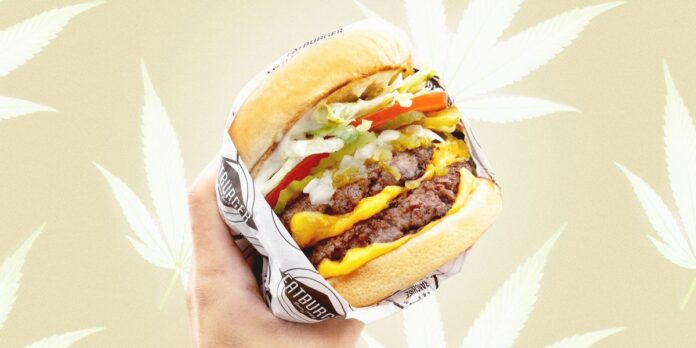 April 20, lovingly known as 4/20 by those who observe the holiday, has snuck up on us again, and with 16 states (plus D.C.) having legalized recreational marijuana, more people can (outwardly) celebrate than ever before. Once a secret stoner event, even #brands have realized there is a reason to get hype. First, legalization. Second, corporate support. Next year? I want bank holiday status and a selection of Hallmark cards. If I can find a card for your three-year-old’s birthday (who can’t even read!), then I want some warm sentiments for the chillest day of the year.

For now, let’s just celebrate the food deals that are before us. It’s not like there are a ton of heavy-hitters who have signed up to participate, but depending on where you’re at in the U.S., there are at least a few options for well-priced snackables to help you ring in the Celebration of Munchies. Some are egregious (see: cookies, designed to be nachos) (also see: chicken, bacon, and hash browns covered in ranch), but they’re all waiting for you when the hunger strikes.

Don’t be a fool: Read that fine print, imbibe responsibly, and above all, keep that mind open. This is the one day of the year when you can pivot from pickles to ice cream to a chicken sandwich, and that’s no one’s business but you and your toilet’s.

In a collaboration with Postmates and rapper Action Bronson, the fast food chain will have a deal featuring the 4/20 Double SmokeSHACK, described as: a double cheeseburger with Niman Ranch applewood-smoked bacon, chopped cherry peppers, and ShackSauce. Oh, and if you use Postmates, you’ll get $4 off of $20 with code ACTION.

Praise be. Not only does Mellow Mushroom have a special $4.20 menu boasting wings, pretzel bites, and cheese bread, it also will be giving away 420 small Merry Prankster pies on its Instagram at 4:20 p.m. In case free pizza weren’t enough of a sell, the Merry Prankster has an herb aioli base topped with chicken, Italian sausage, bacon, garlic, roasted red peppers, green peppers, mozzarella, and Wisconsin aged white cheddar. My god.

The Southeast chain will be pushing its own $4.20 menu for 4/20: small cheese pizza, five wings, garlic knots, and a half-dozen cookies will all be available for the low price for a limited time.

Only on 4/20 could a demented concept like Cookie Butter Nachos be acceptable. So for the holiday (and through May 2) the cookie chain will feature its Cookie Butter Nachos. Pro tip: If you are a CookieMagic member, you get access to discounts, including one for them damn nachos.

Put this in your Popeyes and smoke it. Sticky’s Finger Joint will be featuring all of its chicken sandwiches for $4.20. And that deal runs from open to close on 4/20, so all you have to do is be ready to scarf it down.

Jack in the Box

Jack in the Box

I have four (maybe seven?) words for you: Chick-N-Tater Melt Munchie Meal. Have mercy. The new dish will be available for 4/20 consumption, of course, but on top of the dish—which features a buttery croissant topped with crispy chicken, bacon, and hash browns smothered in an ooey gooey blend of three cheeses and ranch sauce (brb, getting my arteries unclogged)—the restaurant is offering 20 percent off, if you order from the Jack and the Box app.

Hell, let’s cut to the chase: the Fatburger will be available for one day only for $4.20. No gimmicks. No reveals. Just a chain that gets it.

Not specifically a 4/20 deal, but if you’re vaccinated and stoned, you can wander into a Krispy Kreme and get that free donut. And then once 4/20 is over, you can just keep going, because while smoking on 4/20 might seem like an event, smoking afterward and still getting that donut is called a lifestyle.