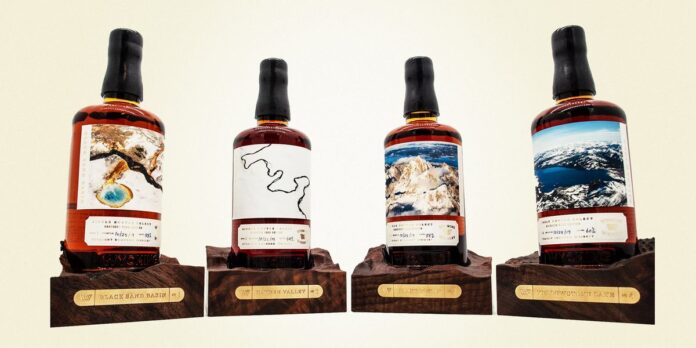 Precious few people get to enjoy living in the awesome (in its literal sense) landscape that is Wyoming—Yellowstone and Grand Teton National Parks both fall within its borders—and half of them are the Kanye West Machine. Among the other half are the folks of Wyoming Whiskey, one of few distilleries in the state but one of the great craft outfits in America. Harrison Ford, known for flying aircraft both on set and in real life, calls Wyoming home, too. National Parks, whiskey, and Harrison Ford—a Wyoming trifecta for the ages.

It’s also a Wyoming trifecta you can own a piece of, in a way. Not a strand of Harrison’s hair or a vial of sulfuric spewing from Old Faithful; nothing weird like that. Wyoming Whiskey, in partnership with the National Park Foundation, is releasing two lines of whiskey that celebrate the rugged beauty of the West, and the first of them is quite easy to attain. Both ReserveBar and Flaviar are selling National Parks Limited Edition American Whiskey, a straight bourbon aged 5 years and housed in a bottle featuring the impressive Teton mountain range, for $50. (Wyoming Whiskey will release a new batch of this series every year.) Ten percent of each bottle’s sale will go to the foundation, which collaborates with the National Parks Service to protect the land and its history.

The second of Wyoming Whiskey’s lines will ask a bit more of your bank account. Called “Wide Open Spaces – By Air,” it is comprised of just four bottles. But man, they’re nice-looking bottles. You can chalk that up to Ford’s vision, as he was pulled into the project as a creative director, presumably for his star power but also because he looks straight down on Wyoming’s National Parks from the sky more than the rest of us. Each bottle is emblazoned with an aerial image taken by Wyoming photographer Tuck Fauntleroy and housed on a wooden topographical map made by natural materials artist Jamison Sellers.

The four By Air bottles will be auctioned off tonight (April 20) at 8 p.m. ET in a virtual live event; RSVPs are open now at bit.ly/WideOpenSpacesByAir. All the proceeds collected will go to the National Parks Foundation.

“For 35 years or so, I’ve been lucky enough to have a home in Wyoming. I am proud to work in conjunction with Wyoming Whiskey, my neighbors and friends, in support of the National Park Foundation,” said Ford in a statement. “I’m very proud of what Wyoming Whiskey is doing with this event, as it is important to protect and restore these national treasures and keep them safe for future generations.”

National Parks are the greatest. American whiskey is also good. Harrison Ford? Cool guy. And as far as booze collaborations go, this one’s pretty nice to look at.

Sarah Rense Sarah Rense is the Lifestyle Editor at Esquire, where she covers tech, food, drinks, home, and more.