Home Lifestyle Ian Somerhalder and Paul Wesley Could Be the Most Obsessive (and Handsome)... 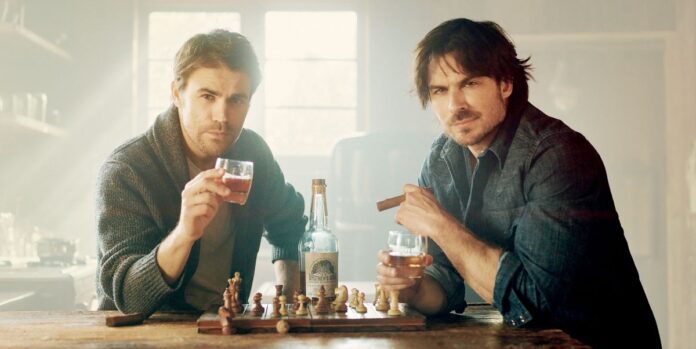 The wood-grain-on-wood-grain office Ian Somerhalder and Paul Wesley operate Brother’s Bond out of looks so small over Zoom that I’m convinced there’s only room for Somerhalder and Wesley, who are shoulder to shoulder, and a single promotional bottle of their concoction. But that intimacy—and constraint—is probably a good thing for these actors-turned-bourbon-men. To make it in whiskey requires obsessiveness. Perhaps a bit of madness for thinking a celebrity-branded bourbon can stick the landing. And most importantly, the ability to work compatibly. “This was really just an excuse for Ian and I to stay together in a one-bedroom office,” Wesley jokes.

Brother’s Bond was a spirit first conceived on the set of The Vampire Diaries before the actors had even wrapped the hugely successful supernatural CW drama. Their characters, the Salvatore brothers, had a taste for the Southern staple, which dovetailed nicely into the actors’ own love for the stuff. A Louisiana native, Somerhalder recalls the grown-ups sipping Mint Juleps on the porch under the ceiling fans after church on Sunday. “For me, bourbon was about culture,” he says. And though Wesley is a damn Yankee (New Jersey born), he’s come to appreciate those bourbon roots after shooting the show in Atlanta for so long. Twelve years after the duo first started working together, the fangs have been traded out for stills and mash bills.

With a lot of celebrity-backed liquors, the personal touch stops at the name. Somerhalder and Wesley, though, spent over a year becoming versed in rye and corn and grain proportions. They wanted a whiskey that bit harder than your average bourbon without setting your mouth ablaze like a full-blown rye. They charted out an idea for something that was smooth and smoky enough. Something woodsy and, oh, it also had to be environmentally sustainable. Turns out when you help drive the process yourself, you can accomplish all those things. The result is Brother’s Bond—a hat tip to the characters that brought them together—which will be available starting May 1. While the name may be an ode to the past, the spirit itself is indicative of what Somerhalder and Wesley want for their future.

A business partnership, much like bourbon, is largely about chemistry. Over Zoom, Wesley is clearly the stoic partner of the two. Somerhalder is decidedly not. He moves from subject to subject (equal sensory proportions! the benefits of regenerative agriculture!) like there’s no topic more exciting. They are the most handsome distilling nerds you’ve ever met. When I ask what the process of working together has been like, Somerhalder’s eyes light up from underneath the flat brim of his flimsy brown cowboy hat as he loudly proclaims, “Well, we’re fucking married.” The laughter subsides and Wesley follows him up: “I think Ian and I have butted heads—I don’t even—like maybe twice in 11 years?”

Bourbon is a difficult market to break into. The industry can be exclusive, if not a bit snobbish. The financial barriers stop most from entering. The official regulations on process and expectations for taste keep most who enter from succeeding. “It’s the most all-intensive spirit you can have other than, I guess, scotch,” Somerhalder says. “It’s highly competitive. The people who are in the space are the ballers of the bourbon industry.”

“We are not stopping until we get it right.”

It wasn’t until the two of them got into the process—really into it—that they realized just how much effort it’d require. “Paul and I were super tired,” Somerhalder says of the night it hit him. “I look around my house… beakers and shit everywhere.” He remembers sitting down, noting all the glasses and the paperwork as his feet, and saying, “Wow, we are actually doing this.” Wesley adds, “This is eight, nine months into it. It was really special just to be able to have that connectivity, which is: We are not stopping until we get it right.”

Of course, “right” is subjective. Judging from the sample bottle sent to me, Brother’s Bond is oaky with more spice than a traditional bourbon, with a sting that lingers on the tongue without scalding it. That’s due to the spirit’s mash bill: The ratio comes in with a typically robust 65 percent corn, but its higher rye content is more distinctive, at 22 percent. It’s easy to drink, but never so innocuous that you’d forget it’s there.

“I love smoky and woody and all that, but… I don’t want it to kick me—as Ian would say, ‘Kick me in the teeth,'” Wesley explains. After hundreds of iterations, they finally settled on the right combination—a blend of bourbons distilled in Indiana, bottled and distributed by Brother’s Bond out of Arkansas. Nervous they’d tricked themselves into acceptance, Wesley and Somerhalder walked away and tried their blend again 20 minutes later. Then an hour later. Then the next morning. They loved it every time. “Obviously, you have a whole team and there’s a lot of science behind it,” Somerhalder says. But when they knew, they knew. “We’re like, ‘Stop, no more. Just stop.’ It was a cool moment.”

It didn’t end with nailing the formula, either. Somerhalder’ll talk your ear off about how farming can help reduce carbon emissions and revitalize top soil. “Dude, if you start to practice regenerative agriculture, the South and the Southeast hold so much power to sequester so much carbon dioxide and produce such a powerful, healthy, and economically surging agricultural industry,” he says. With the Earth in such dire straits, a glass of bourbon can only take the edge off temporarily, so a portion of Brother’s Bond’s profits will go toward regenerative farming practices.

Yes, this bourbon is a new chapter for the two men, but in a funny way, it’s also a cheeky wink to so many viewers who came of age with The Vampire Diaries. “Ian and I haven’t obviously done anything together since the show ended,” Wesley says. “It’s like something our fans get to look forward to that are 21 and over, and the reality is a lot of them are.” As Somerhalder points out, if you were 15 when the show debuted in 2009, you’re well into drinking age in 2021.

Now, all that’s left is to get the public’s (and a fanbase’s) verdict: Do these acting fellas really have what it takes to wade into the world of bourbon? “Our wives thought we were crazy,” Somerhalder says. “We were, man.” Wesley adds, “The thing we were chasing was that we wanted it to be a smooth, approachable whiskey that’s nuanced… so someone who doesn’t drink bourbon can try it and say, ‘Oh wow, I actually like bourbon.'” All they can do is hope the reception is like the whiskey: smooth, without kicking you in the teeth.