Home World Countries in Africa fear they could become the next India as vaccine... 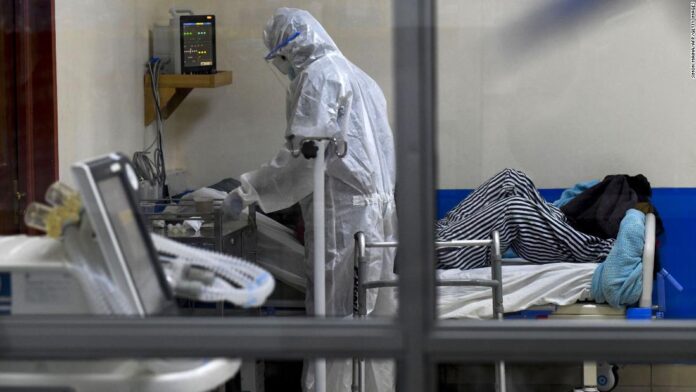 For a world that’s grown numb to wave after wave of infection, the images of patients dying due to a lack of oxygen while others lie untended on the floor are a brutal reminder that this pandemic is far from over.
In late March, in a desperate attempt to curb infection, the Indian government restricted the export of Covid-19 vaccines from its giant manufacturing hubs, to meet some of the country’s more urgent needs. Now, the consequences of that move are playing out across the world.

In the halls of Kenyatta National Hospital in Nairobi, teachers, hospitality workers and taxi drivers patiently wait for their first precious Covid-19 AstraZeneca shot.
In early March, Kenya received just over 1 million doses from the Covid-19 Vaccines Global Access alliance, COVAX, the vaccine-sharing initiative that provides free and discounted doses for lower-income countries. Kenya has been one of the most efficient African nations at getting the vaccines into the arms of at-risk groups.
COVAX is largely reliant on India’s vaccine manufacturers who no longer supply the program because of India’s own Covid crisis.
Kenyans who qualify for doses are already struggling to find them. Beatrice Gatu, a 60-year-old retired medical secretary, said she tried several district hospitals to find a dose — but they had run out. They said she should try Kenyatta hospital, the nation’s main referral hospital.
“I woke up at five in the morning just to get myself prepared to come to this place,” she said, after receiving her vaccine.
Kenya’s President Uhuru Kenyatta personally assured Kenyans they would be able to get their second dose if they’d received a first one.
But Martin Mutisya, a 53-year-old tour guide, has been keeping up with news — he knew he had to hurry just to get his first shot.
“I am concerned, because there are supposed to be two shots, but if that doesn’t happen, what is the worst-case scenario?” he asked.
The worst-case scenario is now happening, said World Health Organization (WHO) and Kenyan public health officials. The East African nation will run out of its first batch of doses in days and there is no sign of a promised second shipment.
“Very clearly it worries me and very clearly the second doses won’t come in time. It really means that everybody who has been vaccinated until now will not get their second dose as planned,” said Rudi Eggers, the WHO representative in Kenya.
On Thursday, WHO said the delays in vaccine deliveries risk opening the door to a new wave of infections on the continent, and the emergence of new Covid-19 variants.
Kenya has used at least 87% of its doses, said WHO. Eight countries have administered 100% of their COVAX doses: Tunisia, Libya, Togo, Botswana, Eswatini, Rwanda, Ghana and Senegal.
The COVAX consortium has publicly stated that the Indian vaccine squeeze will reduce deliveries, telling CNN that 40 million doses were affected in March and 50 million doses in April.
But a senior humanitarian official familiar with COVAX planning said the situation could be much worse, saying that they hope deliveries will open up again in June. But with India’s domestic vaccine rollout struggling to make a dent, they said even that could be optimistic.
“This is not a good situation. We put a lot of effort to get confidence in vaccination. It began slowly, but we accelerated well. Now the demand for vaccines is there and if we aren’t going to get adequate doses, it is going to impact our plan,” said Dr. Willis Akhwale, the head of Kenya’s vaccine taskforce.
Both Akhwhale and Eggers, the WHO representative, said the biggest crisis isn’t the delay of a second dose.
People with one dose will already get some protection and delaying the second dose may not lessen the effectiveness of protection overall — if the second dose is administered. The far bigger issue are the hundreds of millions on the continent with no vaccine protection at all.
“There are people in Kenya that actually would be saved, but do not have access to the vaccine. Not for maybe a year or two years even,” said Eggers.
It wasn’t supposed to be this way.

A plan, on paper

As the Covid-19 pandemic ripped around the globe in 2020, forcing lockdowns and upending lives, the leaders of a global vaccine alliance knew that they needed get vaccines to the world’s poorest nations.
It was a moral imperative, but also a health one. As public health officials have been warning for more than a year now: until every country is safe from Covid-19, no country is safe.
In the face of rich nations securing vaccine supply before vaccines were even proven or approved, the COVAX alliance turned to India.
On the face of it, it was an obvious choice. India is the world’s largest producer of vaccines and the Serum Institute is the world’s largest vaccine manufacturer.
Deals were done for the Serum Institute to manufacture at least 700 million initial doses of the Oxford AstraZeneca vaccine for COVAX.
On February 24, Ghana became the first country to receive free vaccine doses from COVAX — some 600,000 doses. But that day of optimism has been replaced by doubt and worry.

Researchers tracking vaccine supply say a crisis of this magnitude could have been averted by COVAX.
“They put a lot of eggs in the Serum Institute basket and that was a strategic error given that what has happened in India was entirely predictable. It should not have caught any of us by surprise,” said Andrea Taylor, of Duke University’s Global Health Innovation Center.
Just as waves hit China, Iran, the UK, USA and a host of other countries, Taylor said it should have been clear that India would prioritize its own population for protection when its own wave arrived.
In reality, though, there were few other viable options for swift production, and the scale of the problem is breathtaking.
“We’re going to face many challenges in the short term, and principally the equation is we have 8 billion people that need two doses of most of the vaccines, and we’ve only produced about a billion so far, so we do have a mismatch between the demand and the supply,” said Salim Abdool Karim, an epidemiologist who has been a key leader in South Africa’s and the continent’s Covid-19 fight.
That problem has been driven as much, if not more, by wealthy nations prioritizing their own populations, rather than India’s squeeze on the global supply of Covid vaccines.
“We have the challenge of addressing the global inequity in the distribution of vaccines, and part of this challenge is going to be the hoarding of vaccines in countries that already have the quota they need for their own populations and making those available,” said Karim.
The US, for example, has vaccinated more than 250 million people with at least one dose. By contrast COVAX has delivered only around 53 million doses for multiple countries. This means that in America, officials believe life may be back to normal within months, while in the developing world vulnerable people will continue to die.
“We knew what was ahead if we took the road of vaccine inequality, we took that road anyways and now here we are. There aren’t any fixes in the short term,” said Taylor.

From promises, to action

There are signs that the political will is changing. This past week, the Biden administration announced that it is supporting the temporary waiver on intellectual property rights of Covid-19 vaccines at the World Trade Organization.
Advocates say this will help expand manufacturing in the medium-term and shift the debate squarely onto vaccine inequity.
There will also be a moment in the coming months where US and European vaccine supply will outstrip demand — opening up powerful manufacturing capacity for worldwide vaccine distribution.
Even if vaccine distribution ramps up, there is no guarantee that poor countries, with weak health infrastructure, can administer them. In the Democratic Republic of Congo, for example, officials announced in April that they were giving back more than 1 million AstraZeneca doses because they were about to expire. To get doses out on the scale and the speed that is needed may be impossible in places where their systems can’t cope.
But Kenya’s vaccine tsar Akhwale said it’s critical that there is action on vaccine equality, not just talk. “We must use the principles of access and equity that COVAX was built on, so we ensure access to everyone who is at risk, wherever they are in the North, South, East or West,” he said.