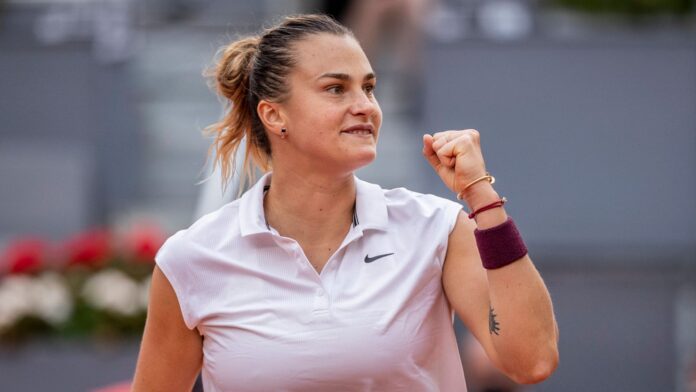 Aryna Sabalenka is set to rise to number four in the world rankings after a 6-0 3-6 6-4 Madrid Open final win over Ashleigh Barty. Meanwhile, Alexander Zverev overcame Dominic Thiem to reach the final in the men’s competition.

Two weeks ago, Barty came from a set down to defeat Sabalenka in the final of the WTA event in Stuttgart, and it looked as if history would repeat itself when the world No 1 assumed the momentum going into the deciding set.

But Sabalenka, one of the biggest hitters on tour, powered her way through the final three games for a 6-0 3-6 6-4 triumph and a 10th career title.

Barty had not lost a match on red clay for nearly two years since before she won her maiden Grand Slam title at Roland Garros in 2019.

She had no answer to the power of her 23-year-old Belarusian opponent in the first set here, though, as Sabalenka produced the shots that have seen her tipped as a future slam champion for several years.

Sabalenka appears closer to that than ever now and she will hit a new career-high ranking of four on Monday.

Just as impressive as her first-set dominance was the way she recomposed herself after her level dropped in the second set, refusing to let Barty engineer her way to another title.

Zverev puts on masterclass to down Thiem

Alexander Zverev avenged his defeat by Dominic Thiem in last year’s US Open final in clinical fashion, beating the Austrian 6-3 6-4 to reach the final of the Madrid Open.

Zverev, who beat top seed and tournament favourite Rafa Nadal in straight sets in the quarter-finals on Friday, will meet either Norway’s Casper Ruud or Italy’s Matteo Berrettini in Sunday’s final.

The German, who was champion in Madrid in 2018, made a strong start, breaking Thiem early in each set in what turned out to be a routine victory, despite a swirling wind at Caja Magica.

“I’m quite happy to win this one,” fifth seed Zverev said in a courtside interview. “We’ve had some fantastic matches. I think we played the biggest matches in the world.

“I’m definitely looking forward to playing in another big [Grand Slam] final and I hope I can turn it my way this time.”