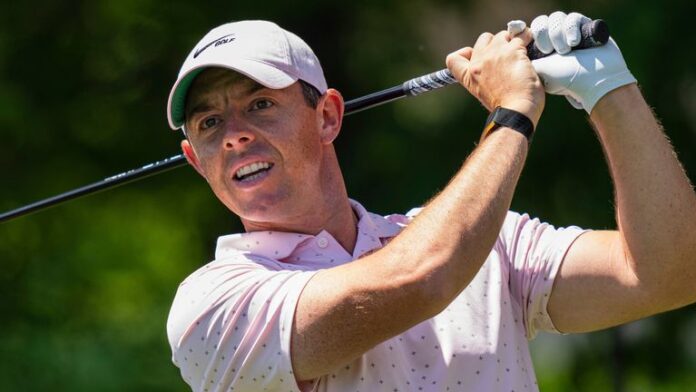 After 554 days without a victory, Rory McIlroy returned to the winner’s circle with his third triumph at the Wells Fargo Championship, a final-round 68 enough to hold off Abraham Ancer, Keith Mitchell and Gary Woodland

Rory McIlroy overcame a final-hole scare to end his 554-day winless run with a one-shot victory at the Wells Fargo Championship.

Returning to the scene of his memorable PGA Tour breakthrough 11 years ago, McIlroy’s third victory at Quail Hollow was a result of clutch putting and all-round efficiency rather than spectacular scoring as a closing 68 was enough to get him over the line.

Halfway through the tournament, McIlroy was delighted at merely making the weekend for the first time since the Arnold Palmer Invitational in March, and he built on his encouraging second-round 66 to put together a winning weekend on a firm and fast layout.

Although he was again inconsistent off the tee on the final day, his controlled iron play and one of the best putting displays of his career led him back into the winner’s circle, although it was not incident-free as he brought a playoff into the equation with one bad swing at the 72nd hole.

McIlroy did not panic when overnight-leader and playing-partner Keith Mitchell extended his advantage to three with an opening birdie, replying with his first of the day at the third followed by another at seven, nailing a slippery left-to-right putt from just inside 25 feet.

The 32-year-old suddenly found himself tied for the lead not with Mitchell, who bogeyed the fifth and sixth, but Gary Woodland, himself looking for his first win since his US Open triumph at Pebble Beach in 2019.

McIlroy was content to grind out the pars and keep the mistakes at bay, something Woodland was unable to do as he dropped shots at the 12th and 13th, but Mitchell then got back into a tie for the lead with a rare birdie at the short 13th.

But Mitchell’s stay at the top was short-lived as McIlroy responded with an exquisite up-and-down from a greenside bunker for birdie at 14, and he repeated that on the par-five next to open up a two-stroke lead over the field with three to play.

After cast-iron pars at 16 and 17, McIlroy then set alarm bells ringing when he pulled his drive way left at the 18th, his ball taking a big hop off a bank but somehow avoiding the creek and nestling in the thick rough, inside the red hazard line.

McIlroy felt that attempting to gouge his ball back into play was laced by uncertainty and, following a long deliberation with caddie, Harry Diamond, the team decided to take a penalty drop to give him the optimum chance to reach the green from a friendlier lie.

And the decision proved astute when he dropped into a friendlier lie and hammered an eight-iron to just inside 45 feet, and he lagged to a few inches to leave himself a relatively stress-free tap-in for bogey and the win on 10 under par.

“It’s never easy to win out here,” said an emotional McIlroy afterwards. “It’s felt like a long time since that victory in China back in 2019. The world is a completely different place than it is today, and life has changed a lot for me being a dad, and winning on Mother’s Day, I’m thinking of Erica (his wife, Erica Stoll) and thinking of my mum back home.

“This is one of my favourite places in the world and to break the drought and to win here again, that’s awesome,” added McIlroy, who reiterated his enjoyment at being in contention in front of a healthy number of spectators for the first time since early 2020.

“It’s just awesome to play in front of these people again,” McIlroy said. “When we came back from the pandemic, I thought I’d enjoy the peace and quiet a little bit, but I soon realised that to bring the best out of myself I needed this.

“I feed off the energy so much, maybe here more so than anywhere else just because it’s the first place I’ve won three times, so the crowd has just been awesome all week and they really carried me through today.”

Abraham Ancer emerged as a genuine late contender when he made a mockery of the difficulty of the Green Mile, making three consecutive birdies from the 15th to vault to nine under, and he came within an inch of posting 10 under in the clubhouse when his birdie putt at the last pulled up next to the cup.

The Mexican’s reward was outright second place ahead of Mitchell, who bogeyed 17 to slip to eight under along with Viktor Hovland, who missed a series of chances to improve on his closing 67, with his four birdies a poor return from some sparkling play from tee to green.

Woodland limped in with a 71 to finish on seven under, while Matt Wallace claimed a top-six finish on five under after a solid one-under 70 hauled him alongside Patrick Reed (70) and Bryson DeChambeau (68).