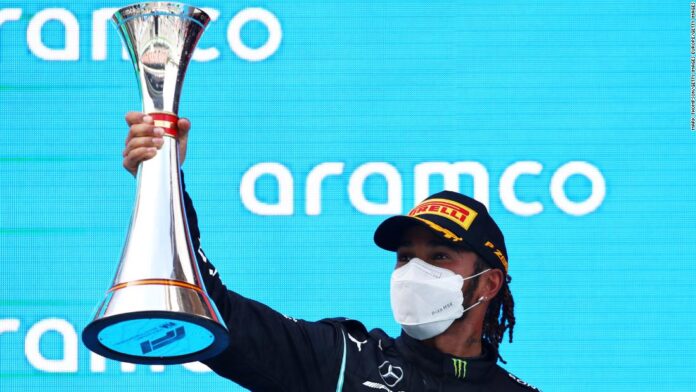 These two rivals have been battling for race wins in each of the four grands prix so far this season, but Hamilton’s victory at the Circuit de Barcelona-Catalunya — the 98th Formula One win of his career — moves him 14 points clear at the top of the driver standings.
Hamilton’s Mercedes teammate Valtteri Bottas finished in third, with Charles Leclerc coming fourth and Sergio Perez finishing fifth in the other Red Bull.
Seven-time world champion Hamilton had lost his lead from pole position on the opening corner and it took some creative strategic thinking from Mercedes for him to eventually win it back.
Mercedes caught Red Bull — and everybody else watching — by surprise and called Hamilton in for a second pit stop on lap 43 with the Briton breathing down Vertstappen’s neck.
READ: Lewis Hamilton, Formula One’s voice and conscience
Hamilton returned to the track in third place and 22 seconds behind Verstappen but, crucially, with fresher and faster tires. There were immediate similarities to the 2019 Hungarian Grand Prix, when Hamilton hunted down Verstappen after a similar pit stop strategy to eventually pass him for the win.
Verstappen’s race engineer thought so too. “It’s like Hungary all over again,” he lamented over the team radio.
Hamilton still needed to take a second per lap out of Verstappen’s lap times to overtake him on the final lap. In the end, it was far more comfortable than that, with Hamilton passing his world title rival six laps from the end.
“I was just hunting,” Hamilton told Sky Sports after the race. “I was so close for so long and I didn’t think in doing that I was going to be able to make the tyres last — but I just managed to. It was a long way to come back from 20-odd seconds back but it was a good gamble, a really great strategy from the team.”
“I was really conflicted. Do I come in or I do ignore the call and stay out? Obviously I did what the team asked and naturally that’s because there’s a great trust between us. Just a remarkable job by everyone in this team. What a day.”
The victory extended the 36-year-old’s remarkable recent dominance in Spain, claiming a record fifth consecutive race win to take his career tally to six Spanish Grand Prix victories.
However, one win and three second place finishes for Verstappen so far this season means the young driver remains hot on Hamilton’s heels.
Correction: This article has been updated to reflect the finishing order of the drivers.