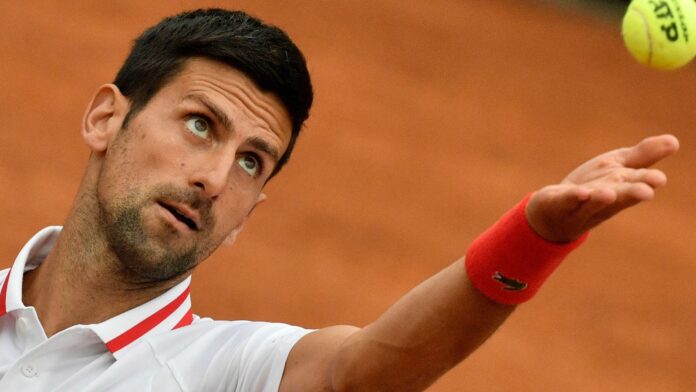 Novak Djokovic loses his cool as rain held up his second-round match at the Rome Masters; Cam Norrie has come through qualifying and produces another confidence-boosting win over Carballes Baena; Johanna Konta bows out to the heavy-hitting Jelena Ostapenko

Novak Djokovic lost his cool during his second-round victory at the Rome Masters as Britain’s Cam Norrie stayed on course for a potential showdown with the world No 1 with another confidence-boosting win.

Djokovic, back in action after sitting out the Masters in Madrid, had taken the opening set 6-3 against Taylor Fritz before moving a break ahead in the second to lead 5-4.

However, Djokovic then failed to serve out for the match as American Fritz, who had beaten British No 1 Dan Evans in the previous round, rallied.

With conditions worsening and rain getting heavier, Djokovic’s temper boiled over, shouting at the umpire “how much more do you want to play?” then adding “I asked you three times and you are not checking anything” as his remonstrations with the chair continued.

Eventually, play was suspended, with the players coming back onto court to resume action some three hours later once the weather cleared around the Foro Italico.

Fritz, the world No 31, held his service game after the resumption to force the tie-break, which Djokovic came through to win 6-3 7-6 (7-5).

Speaking afterwards on Amazon Prime, Djokovic said: “We had everything today. With the interruption, it is never easy playing in these types of conditions.

“We played almost two full sets non-stop under the rains, at one point it was quite dangerous for movement.

“I kind of lost my cool towards the end of that second set when I served for the match, but at the end of the day when you overcome these kinds of circumstances and challenges, I think it brings even more confidence in you.

“I know it is necessary for me to step out on the tennis court tomorrow to work on things, I know I can play better and will make sure I do.”

Norrie has been in excellent form in 2021 and has built on his run to the final of the ATP event in Estoril earlier this month with three more victories in the Italian capital.

Two of those came in qualifying before Tuesday’s 6-4 6-4 victory against Spaniard Carballes Baena.

Norrie barely put a foot wrong to surge into a 5-1 lead but his forehand went off the boil as he twice failed to serve out the set only to break Carballes Baena in the 10th game.

It was a similar story in the second, where Norrie broke for 5-3, was broken back serving for the match but then broke again to clinch it, a little shake of the head at the end indicating he knew he made life harder for himself than it needed to be.

In the second round, Norrie will take on another Spaniard in Alejandro Davidovich Fokina with the winner of that match to face Djokovic.

British No 1 Johanna Konta saw her hopes of progressing on the clay in the Italian capital crushed after a dominant first-round display by Jeļena Ostapenko.

The Latvian produced some heavy hitting which 2019 finalist Konta failed to live with.

Ostapenko, the 2017 French Open champion, eventually ran out a comfortable 6-3 6-1 winner at the Foro Italico.