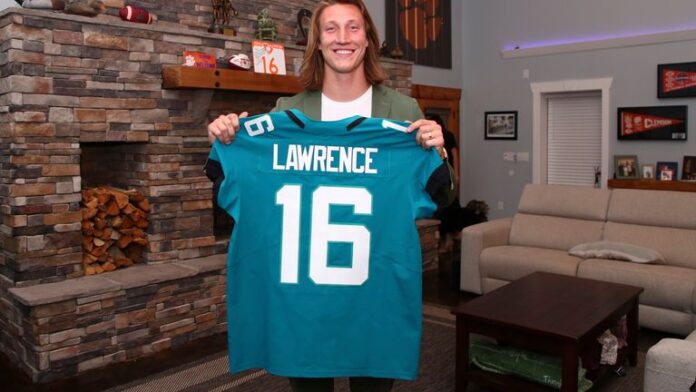 The Atlanta Falcons and Jacksonville Jaguars will host the New York Jets and Miami Dolphins, respectively, at the Tottenham Hotspur Stadium in October as the NFL makes its return to London

The Atlanta Falcons will host the New York Jets while the Jacksonville Jaguars welcome the Miami Dolphins to London as the NFL makes its eagerly-anticipated return to the UK in 2021 following a year away due to the coronavirus pandemic.

Tottenham Hotspur’s £1bn multi-purpose stadium will play stage to both the 29th and 30th London games since 2007, with the Jaguars scheduled to make their eighth appearance in the capital.

Once again, however, there will be no NFL game in Mexico as the league looks to protect the health and well-being of fans ahead of a potential return in 2022.

The Falcons will make their second visit to the UK having lost 22-21 to the Detroit Lions back in 2014, this time arriving with a new head coach at the helm in former Tennessee Titans offensive coordinator Arthur Smith.

Smith was appointed earlier this offseason after Raheem Morris had taken charge on an interim basis in October in the wake of Dan Quinn’s departure amid a 4-12 season.

They will be met by a New York Jets team coming off a busy offseason in which they introduced former San Francisco 49ers defensive coordinator Robert Saleh as their new head coach and drafted quarterback Zach Wilson with the No. 2 overall pick.

Falcons president and CEO Rich McKay said: “We’re honored to return to London for the first time since 2014 as part of the NFL International Series and look forward to the world-class experience at Tottenham Hotspur Stadium. Our league receives great support from passionate NFL fans in the UK and we’re looking to gain more Falcons fans with the trip.”

The making of Trevor Lawrence

From ‘naked wild man’ to ‘ego-less superstar’. Those close to Trevor Lawrence’s ascent provide insight on the generational talent behind-the-scenes.

Jacksonville had been due to host two games at Wembley Stadium last season until the International Series was cancelled due to the impact of COVID-19; prior to then they had played a game in London for seven straight seasons.

The strengthened Jags will be led out by a new head coach in Urban Meyer and quarterback Trevor Lawrence, who awaits as the main attraction as he gears up for his UK debut as a rookie after being selected with the No. 1 overall pick at the Draft.

Entering 2021 on the back of a 1-15 campaign, the Jaguars will come up against a Miami outfit arguably well ahead of schedule under the tutelage of Brian Flores after finishing last season with a 10-6 record. It will mark the Dolphins’ fifth appearance in London having been part of the first game at Wembley against the New York Giants in 2007.

“The Jaguars are honored to return to London, our home away from home, and continue in our mission to grow the NFL and promote Jacksonville in the UK and beyond,” said Jaguars team owner Shad Khan. “With Urban Meyer as our head coach, we’ll be arriving with an entirely new look and attitude that I’m confident will meet the approval of our Union Jax supporters. I’m also hoping that many of our loyal fans in Jacksonville can join us in London for a great experience and to ratchet up the homefield advantage. Go Jags!”

“We are excited to be returning to London and welcoming back our fans for two great matchups,” said Christopher Halpin, NFL executive vice-president-chief strategy & growth officer. “We expect these games to be a celebration of our sport and our robust UK fan base.

“We have been working closely with the UK government, the city of London and the relevant health organisations over the past year in planning the games. Through their successful vaccine rollout and commitment to bringing crowds back to sports events, the time is right for the return of NFL football this fall. We will continue to monitor the COVID environment, putting health and safety first, and will adhere to any and all future COVID regulations and restrictions.”

The Green Bay Packers remain the only team yet to play overseas, however, the new 17-game schedule that will see them play nine home games every two seasons means they will now host an international game at least once every eight seasons.

Earlier on Wednesday it was announced the Tampa Bay Buccaneers would begin the defence of their Super Bowl crown at home to the Dallas Cowboys in the season opener on Thursday, September 9.

The Chicago Bears, potentially led by new quarterback Justin Fields, visit the Los Angeles Rams in the first Sunday Night Football of the campaign, before Lamar Jackson and the Baltimore Ravens face the Raiders in Las Vegas on Monday Night Football.

Week One Fixtures (all times are UK times)

Players to watch in London

The Falcons’ arrival will provide fans with an up-close look at the daunting open-field matchup that is rookie tight end Kyle Pitts, who was taken at No. 4 overall as one of the most exciting and coveted players in this year’s Draft class. Between him, Julio Jones and Calvin Ridley, Atlanta bring a formidable unit of receiver weapons at the disposal of veteran quarterback Matt Ryan, who faces a potentially-defining season in regards to his future with the organisation.

The Jets see Atlanta’s Kyle Pitts and raise them quarterback Zach Wilson, the man tasked with leading a new era for the franchise after being drafted out of BYU. His breakout 2020 season at college entailed flashes of genius that those in New York will be hoping he can translate onto the next level.

He finds himself equipped with a vastly-improved Jets receiver corps, including free agency pickup Corey Davis and gifted technician Elijah Moore, who was drafted out of Ole Miss in the second round.

What better way to celebrate the NFL’s return to London after a year off than by welcoming the future face of the league to town? The phenomenal hair, arm talent, athleticism and star quality of Trevor Lawrence will be on display as the former Clemson play-caller spearheads a new era for the Jaguars after fulfilling long-term expectations in becoming the No. 1 pick at the Draft.

He will be accompanied by running back and fellow Tigers product Travis Etienne, who became the No. 25 overall pick in Cleveland and joins 2020 undrafted sensation James Robinson to form a talent-rich backfield. On the other side of the ball, third-year defensive end Josh Allen promises to be instrumental, should he stay healthy, while second-year edge rush partner K’Lavon Chaisson still has a lofty reputation to live up to after a tough rookie campaign.

It’s easy to forget Tua Tagovailoa entered his rookie campaign on the back of major surgery and gruelling rehabilitation following the season-ending injury he suffered in his final year at Alabama. With a full offseason and training camp behind him, he will be primed to flourish with the help of new weapons in former Crimson Tide teammate Jaylen Waddle and free agency acquisition Will Fuller.

The Dolphins defense meanwhile promises playmakers in abundance, including 2020 interception leader Xavien Howard and intriguing first-round pick Jaelan Phillips, who was touted as the most accomplished pass rusher of the 2021 class but arrives with uncertainty over his history with concussions.

Keep across skysports.com and @SkySportsNFL on Twitter as we build up to the 2021 NFL season.