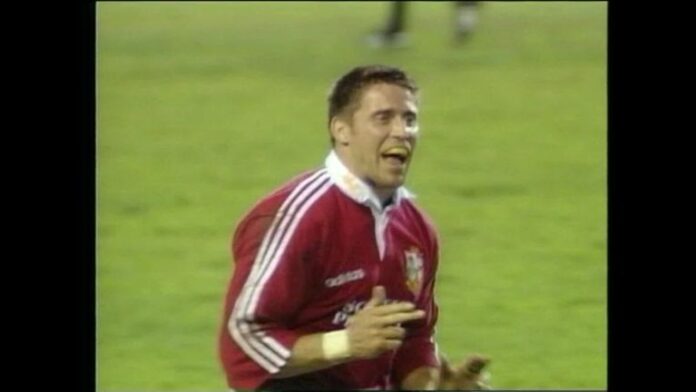 Five Saracens internationals were named in this year’s British & Irish Lions squad to tour South Africa despite the club being in the Championship. It is not the first time players from outside the top flight have been called up though

When Warren Gatland announced his squad for this year’s British & Irish Lions tour to South Africa last week, five players from Saracens were among the 37 players included to take on the might of the Springboks.

Ordinarily, the selections of England captain Owen Farrell and his fellow internationals Mako Vunipola, Jamie George, Maro Itoje and Elliot Daly – all of whom have been capped by the Lions too – would not be particularly notable, although the fact their club is now playing in the Greene King IPA Championship following their enforced demotion from the Gallagher Premiership adds intrigue.

Sam Simmonds, who last played for England in 2018, has been included in a 37-man British and Irish Lions squad to face South Africa.

In the amateur era prior to a formalised league pyramid being implemented in English club rugby, players from a wide variety of teams who these days ply their trade in the regional divisions, not to mention university, hospital and police teams, were all invited to tour with the Lions.

One member of the constabulary proved a towering presence following the introduction of an organised league structure in 1987 though – and not just because he stood at 6ft 8in tall at a time before it became the norm for second-row forwards to be hulking giants.

Despite playing nearly the entirety of his international career with fourth-division Preston Grasshoppers, Wade Dooley represented both England and the Lions with distinction, striking fear into the hearts of opponents the world over with his ferocious approach to the game.

“It’s a big step up from Preston to England, but the only time I ever found it hard was in my very first international,” Dooley was quoted as saying when he hung up his boots in 1994. That first cap came against Romania in 1985 and four years later he would help the Lions to a series win in Australia.

Given he had been on the frontline of the 1981 riots in Toxteth in his day-job, there was little on the rugby field which was going to faze the man known as ‘The Blackpool Tower’ on the rugby field, and he was one of the men head coach Ian McGeechan turned to in a bid to get that tour back on track.

A record 30-12 defeat at the hands of the Wallabies in the first Test in 1989 saw McGeechan opt to beef up his side’s physical presence for the second clash, with Dooley lining up alongside compatriot Paul Ackford – himself a Metropolitan Police inspector – in the second row in place of Welshman Rob Norster.

His inclusion, along with that of Gloucester’s back-row enforcer Mike Teague following his recovery from a shoulder injury, helped give the Lions the steel they needed in what has gone down in the team’s history as one of their most brutal matches and was dubbed ‘The Battle of Ballymore’ by the Australian press.

A 19-12 win sent the series to a decider though and Dooley was involved again as Gavin Hastings kicked the Lions to a 19-18 win in Sydney to clinch the series.

The Warrington-born forward was back in 1993 for the tour to New Zealand too as he prepared to bid farewell to the international stage, although there was to be no happy ending for him.

The sudden death of his father saw Dooley return home for the funeral and although the New Zealand Rugby Union were happy for him to re-join the squad, he was prevented from doing so by the home unions committee who cited International Rugby Board rules.

Despite all members of the squad being prepared to sign a letter protesting the decision and team manager Geoff Cooke giving Dooley his backing, there was to be no change of hearts and he was denied a Lions Test swansong, retiring from playing the following year to focus on his police career.

In rugby union’s amateur era, north-east outfit Gosforth had provided two Lions tourists in the form of Ray McLoughlin (1966) and Roger Uttley (1974). Fast-forward to 1997 and the professional era, and the club now rebranded as Newcastle Falcons had five men alone included for the South Africa tour.

Bankrolled by Sir John Hall, the Falcons had become the world’s first fully professional club when the sport was declared ‘open’ in 1995 and quickly set about recruiting established internationals like Scotland’s Doddie Weir and England’s Tony Underwood – both of whom were chosen to tackle the Springboks.

They were joined by Alan Tait and John Bentley, who had returned to the 15-man code from rugby league, and up-and-coming full-back Tim Stimpson after helping Newcastle to promotion to the top-flight as National Division Two runners-up in the 1996/97 season.

The only club with more players involved were Premiership big-guns Leicester Tigers, with six, and the Newcastle contingent were not the only second-tier players called up by head coach McGeechan as Richmond’s Welsh pair of Allan Bateman and Scott Quinnell – another two who had returned across rugby’s divide – both got the nod after helping their team clinch the Division Two title.

Sadly, both Weir and Quinnell would be forced to leave the tour due to injury, but Scotsman Tait in particular would play a key role in the first Test victory which would put the Lions on course for a memorable 2-1 series triumph.

His try in the closing seconds put the seal on a 25-16 victory over the Rugby World Cup holders in Cape Town, taking a pass from Neil Jenkins to finish an attack from the tourists six minutes after Matt Dawson’s try had put them ahead.

“I remember it was a great run by Gibbsy [Scott Gibbs] that got us that yardage, and then Tim Rodber, of all players, I’d never seen him offload before,” Tait told the Lions’ official website last year when recalling his try.

“He got that ball away because he knew what we’d practised for six weeks, keeping the ball alive. I was lucky enough to be on the end – Jenks’ ear will still be hurting now the way I was shouting for the pass.

“I put it down and just thought ‘we’ve won it’, you knew that was it, we’d won the Test. I looked towards the crowd and did my pistol gunfire thing – I don’t know where that came from.”

Only time will tell how much of an impact the Saracens contingent will have for Gatland’s men as they too attempt to conquer the reigning world champions in the coming months.

Watch every match from the British & Irish Lions’ tour to South Africa exclusively live on Sky Sports this summer.