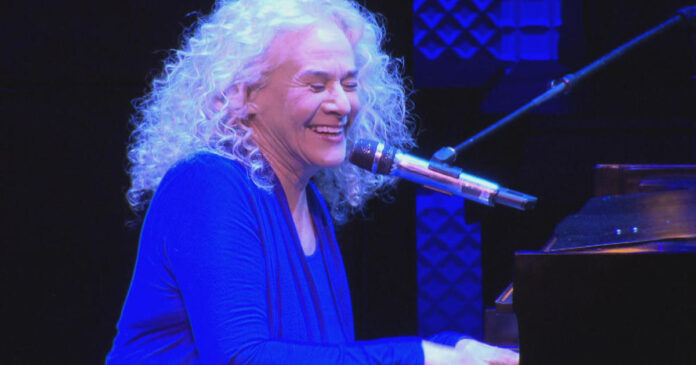 It is possible, even likely, that many people in the audience of “Beautiful: The Carole King Musical” know most of the songs by heart. Carole King has heard it from her fans the world over.

“I meet people, and they come up to me apologetically: ‘I know you’ve heard this a million times …’ and I say, ‘But never from you,'” King said. “‘And I really want to hear from you. What did you feel?'”

Well, there was a lot of feeling last night at the Stephen Sondheim Theatre, where actress Chilina Kennedy portrayed the legendary singer-songwriter. But near the end of the second act, something remarkable happened: Kennedy stayed in the wings, and Carole King took the stage.

To a stunned audience, King played herself to celebrate the fifth anniversary of “Beautiful” – an international hit that tells her life story.

A teenager from Brooklyn goes to Manhattan in the late 1950s to sell her songs. Not long after, at college, she meets lyricist Gerry Goffin, marries him, works with him, and eventually loses him. And along the way, she writes or co-writes the songs with which many of us grew up: “You’ve Got a Friend,” “It’s Too Late,” “So Far Away,” to name a few.

But it’s something of a miracle that “Beautiful” ever got to Broadway.

She admitted, “I didn’t want this show to happen in the first place.”

At a workshop reading of the musical, King kept her coat on: “I’m wearing sunglasses. I take off my backpack. I sit in the back like this, with my arms around my backback, my coat kind of half-on, half off.”

“Yes, and poised to leave! I went out into the ante-room and I said, ‘I’ve gotta get some air. I can’t stay for the second act.’ I cannot watch the second act ’cause I knew …”

“You know how the story goes.”

“Yes, and there are more painful moments.”

But King realized the show might work, and ultimately gave it her blessing, with one caveat: “I will never go see it. I can’t watch the second act.”

That’s the point when husband Gerry Goffin has a breakdown. He had already told King he was incapable of being faithful.

So, when the musical opened on Broadway in January 2014, where was she? “I didn’t go to opening night. Gerry was alive then, he did, and he is portrayed as someone who causes hurt to Carole in the show. And he did.

“And the people who love Gerry who were part of the production made him not a villain, rightly so. He always felt bad about having caused me pain, and to the end of his life [said], ‘I’m sorry I caused you so much pain.’ He wasn’t a villain; he had mental illness.”

“What does that mean, from your standpoint?” asked Gayle.

“He was bipolar, although they didn’t call it that then. I think they called it manic depressive. He drank some. He’d have a little more to drink each night, and then he started smoking pot, and then other drugs started to come into the picture. And at some point he what we then called ‘flipped out.'”

After attending the opening, Goffin told his ex-wife that he loved the show. Still, it took Carole King another three months to finally come to the theatre. She sat on the far left, near an exit door that went backstage. “I am feeling like the most important thing at this moment is that nobody can figure out that I’m me,” she said. She wore a disguise that night.

“And I knew that nobody would recognize me as long as I didn’t speak or smile. As the show unfolded, I’m like, Oh my God, this is so good!“

One of the show’s most emotional moments is their mega-hit song: “(You Make Me Feel Like) A Natural Woman,” which King and Goffin wrote in one night back in 1967 for Aretha Franklin.

“He gave me the lyric ‘Looking out on the morning rain.’ He just wrote it out. And I’m playing this. I have this gift where if I see the lyrics, sometimes I just sit at the piano and it just comes out, just like you heard it.”

And if there were ever a definitive performance of that song, just watch the clip from the Kennedy Center Honors from three years ago (below), when Aretha brought down the house:

King said, “Here’s what surprised me. She sits at the piano! She’s playing! I was knocked out because she is such a gifted piano player! Every note she sang, everything she did. Oh my God! I can’t … and she did that. Oh my God!“

Gayle said, “I’m thinking, if I was Carole King, that would be one of the highlights of my life.”

Carole King will turn 77 next month, and she says her life is truly beautiful.