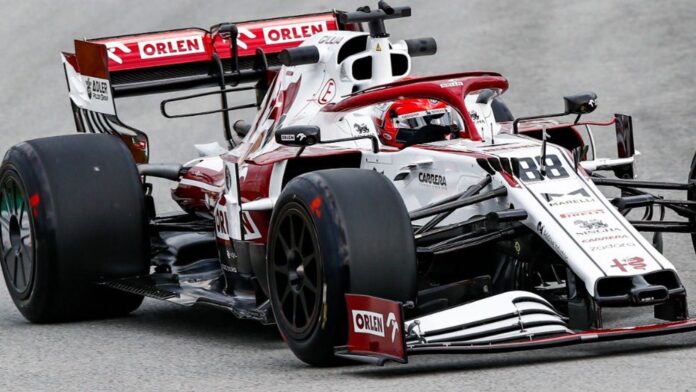 Red Bull, Alpine and Alfa Romeo the latest teams in action in Pirelli testing to try next season’s new larger tyres; F1 cars will look radically different in 2022 as part of overhaul of technical regulations

F1 car design is being overhauled for next season as a central pillar of the sport’s long-term target to increase competition through the grid and allow cars to race closer together. One of the most visible changes will be to the tyres, with larger, lower-profile 18-inch wheels replacing the traditional 13-inch tyres.

Pirelli have been granted 28 days of testing to work towards the specification of next year’s tyres and compounds, which continued on the Tuesday and Wednesday after the Spanish GP.

It’s the end of the day and the @Circuitcat_eng test for @alex_albon, and he’s clocked up 251 laps over two days with @redbullracing on 2022 #fit4F1 18-inch tyres: almost 4 times the distance of the Spanish GP! Red Bull’s next 18-inch test will be at Silverstone on 20 July. @F1 pic.twitter.com/EiQxMRvRrA

Alpine, Alfa Romeo and Red Bull were the latest teams to try out the development tyres, using mule cars and reserve drivers.

Alex Albon, who has stepped down to a back-up role at Red Bull this year after losing his race seat to Sergio Perez, returned to F1 testing duties and completed 251 laps across the two days.

Alpine, meanwhile, ran Daniil Kvyat for the first time in the Russian’s first F1 outing since the end of last season.

Alfa Romeo’s Robert Kubica completed 240 laps across his two days in the car.

“It’s always interesting to discover new features of the car, especially when it’s something as important as the tyres. These are our team’s first steps with the new 18-inch tyres so there is a lot to learn. We covered lots of laps, lots of miles and got a lot of data that will keep everyone busy.

“It’s been a tough two days: I hadn’t been in the car for a while before last Friday and to run for two days on such a demanding track was a challenge, but one we happily completed with success.”