Home Culture When a Pipeline Goes Down, Tanker Trucks Come to the Rescue 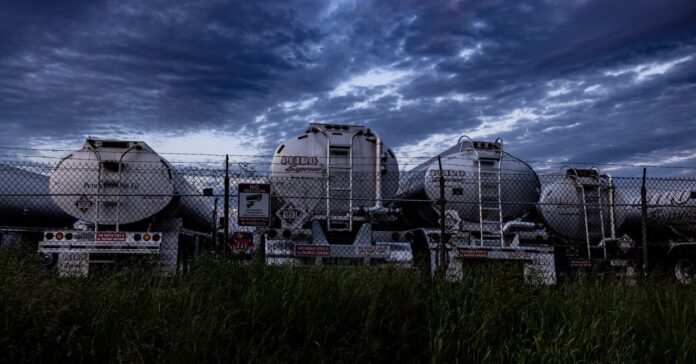 On Wednesday night, the Colonial Pipeline Company, which operates the country’s largest pipeline system for refined oil, reported that the 5,500-mile system was finally up and running again, with service slated to return to normal by week’s end. It had been four days since the pipeline went down in a historic—and frightening—ransomware attack.

And yet, as of Thursday morning, cars continued to snake around gas stations up and down the Eastern seaboard, waiting their turn to fill up at the tank. Turns out that if you tell people something is threatening their petroleum supply, they will freak out and buy a lot of it. The National Association of Convenience Stores reported Wednesday that stations are doing two to four times their usual business, with some retailers clearing several days’ worth of gas—around 16,000 gallons per station—in a few hours. It’s the kind of purchasing behavior the industry usually sees around hurricanes, says Jeff Lenard, the association’s vice president of strategic industry initiatives.

The panic buying has spilled into areas that don’t even get their gas from the Colonial Pipeline: On Wednesday, the association reported elevated sales as far south as Naples, Florida, a region that gets its gasoline off of cargo ships.

The pipeline shutdown did lead to some supply issues, industry executives say. But many of the gas shortages at retail locations are happening because petroleum is simply in the wrong place. Mostly unable to use the pipeline the past few days, the oil and gas industry has turned to other modes of transportation: rail, vessels, and, most of all, tanker trucks. A lot of tanker trucks.

Usually, tanker trucks are the last element of oil’s long journey from refinery to fuel tank. Ships, rail lines, and pipelines do the bulk of the work, delivering gas to distribution terminals scattered around the country. Trucks finish up the journey, from distribution terminal to one of the country’s 150,000 gas stations. Because of the pipeline slowdown and the uptick in demand everywhere, truckers are now having to make faster turnarounds and sometimes longer trips—as much as an extra 80 to 180 miles each time, according to Ryan Streblow, the interim president of National Tank Truck Carriers, an industry group.

There are only so many trucks to pick up the pace, however—and only so many drivers. Thousands of petroleum drivers are on the road this week, according to National Tank Truck Carriers, hauling between 8,000 to 11,500 gallons of gas each. It will likely be several days before everything at the pump returns to normal.

In an effort to get gas moving more quickly, the federal government has granted area-specific waivers allowing tanker trucks to carry more gas than safety guidelines usually permit. It has also waived some hours-of-service rules, permitting drivers to stay on the road for longer than usual.

Michael Belzer, an economist at Wayne State University who studies trucking, likens the situation in the oil and gas industry to the kind of supply chain issues lots of other sectors have faced during the Covid-19 pandemic—from toilet paper to milk to lumber. “Like everyone else in the Covid economy, you have supply chain dislocations,” he says, meaning products that aren’t in the place where they’re needed. “It takes time to catch up with the slight increase in demand.”

Petroleum industry executives say it would be easier to get gas to the right places if it had more tanker truck drivers. In April, the petroleum carrier industry group began to warn of a shortage of drivers, especially in light of the predicted upswing in gas demand during the travel-heavy summer months. The industry has 10 percent fewer drivers than it did in 2019, Streblow said Wednesday. “You magnify that challenge when you have a disruption in the supply chain, and that’s what we’re having right now on the East Coast. So therefore, it gets stressed even further.”