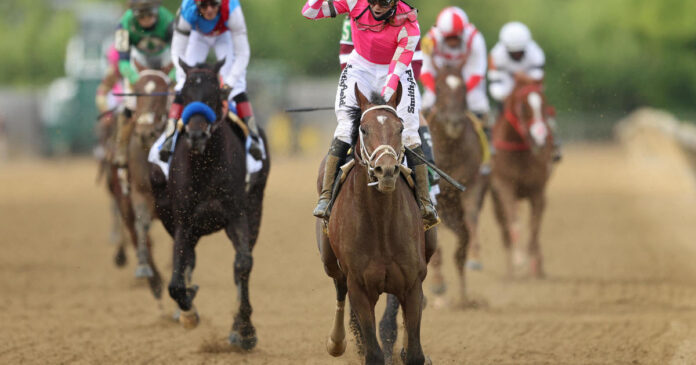 Rombauer has won the 2021 Preakness Stakes, dashing the hopes of another Triple Crown winner. At race time, Medina Spirit, the Kentucky Derby winner, was the favorite at 2-1 odds.

Midnight Bourbon came in second and Medina Spirit had to settle for third place.

Medina Spirit on Friday was cleared to race after passing three drug tests. The horse had previously tested positive
for the steroid betamethasone following his Derby win, which led to Churchill Downs suspending trainer Bob Baffert and saying it would invalidate Medina Spirit’s win if the results of the failed drug test were upheld. The final results of Churchill Downs’ drug tests have not yet been announced. Should Medina Spirit’s win be vacated, Mandaloun would become the Kentucky Derby winner. Mandaloun did not run in the Preakness Stakes.

Two other Baffert-trained horses also had to pass three rounds of blood sample testing before being allowed to run in the Preakness Stakes. Baffert did not attend the Preakness Stakes this year because he did not “want to serve as a distraction,” the trainer told NBC Sports.

While the infield at the Preakness Stakes was once again empty this year, 10,000 fans were permitted to attend and sit in the stands in socially distant eight-person “pods.”