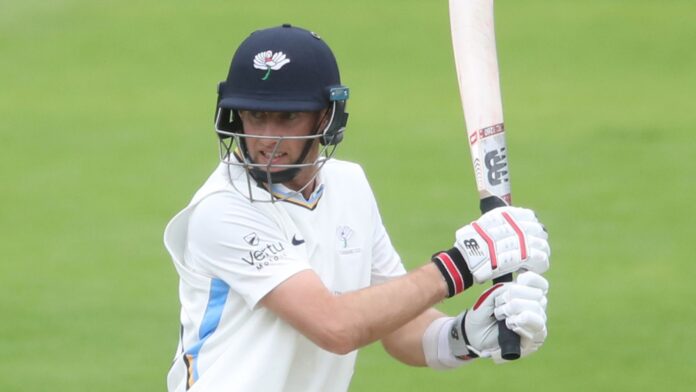 Joe Root batted superbly on day three of the LV=Insurance County Championship match between Glamorgan and Yorkshire to put his side in a position to push for victory but missed out on a century, bowled by Dan Douthwaite for 99.

Root’s runs gave Yorkshire a first-innings lead as he and Steven Patterson blunted the Glamorgan attack on a pitch that, Root aside, has been hard work for batsmen.

Glamorgan had bowled well before Root and Patterson’s partnership, with Michael Neser claiming a five-wicket haul on his home debut.

When Glamorgan came out to bat for their second innings, they lost three quick wickets before David Lloyd and Kiran Carlson took them to 108-3 at the close, a lead of 27.

The England Test captain drags on a run short of his century! Disappointment for him after such a good knock but he’s put Yorkshire in a very good position.#GLAvYOR #LVCountyChamp

Simon Harmer twirled career-best figures of 9-80 to befuddle Derbyshire as Essex headed towards a second County Championship victory of the season.

Off-spinner Harmer’s analysis were the 13th best of all-time for Essex and the second-best ever at the Cloudfm County Ground, Chelmsford.

The visitors were asked to follow on having been rolled for 146, but improved second time around led by Brooke Guest and Billy Godleman.

Guest, who had top-scored with a manful 49 in the Harmer rout, bagged his maiden first-class fifty as Derbyshire ended the day on 97-1, trailing by 169.

Keith Barker hit two personal landmarks to set up Hampshire‘s seven-wicket victory against Middlesex in their rain-affected game at Lord’s.

Barker blazed an impressive 84 – his highest score for the county – to secure a valuable lead of 36 as they stretched their first-innings total to 208.

How good does that feel? 😍 pic.twitter.com/PtmGZPacq9

The 34-year-old also bagged his 50th red-ball wicket in Hampshire colours as the home side crumbled to 101 all out inside 30 overs, with Kyle Abbott claiming another five-for to take his match tally to 11-85.

That left Hampshire chasing a modest target of 66 and, although rain intervened, they had just enough time to scramble home.

England fast bowler Jofra Archer was missing from the Sussex attack as play got underway six hours behind schedule on the third day of the LV= Insurance County Championship Group 3 match against Kent.

The batsmen did their best to make up for lost time with a positive start after being frustrated by persistent rain and a very wet outfield at the southern end of the ground.

But Kent were helped on their way by not having to face Archer, even though the England player took his place on the field.

Durham require 10 wickets on the final day against Worcestershire after centuries from Will Young and Jack Burnham handed the visitors a daunting fourth-innings chase.

Young provided the foundation with his second century of the season in his final game for the home side while Jack Burnham upped the ante late in the afternoon and notched his first hundred since May 2016. Ned Eckersley also provided a brisk knock of 86 from 57 balls, including six sixes.

Worcestershire’s openers faced a tough final hour, but Daryl Mitchell and Jake Libby remained unbeaten at the close after putting on a stand of 60, although their side require another 363 runs to pull off an unlikely victory at Emirates Riverside.

Only nine overs were bowled on the third day of the rain-ruined match between Somerset and Surrey at Taunton. Play began on time with Surrey 191-4 and they were able to add 15 to their total before the rain started falling. Surrey vs Somerset scorecard

Watch day four of Glamorgan vs Yorkshire, live on Sky Sports Cricket from 10.55am on Sunday.