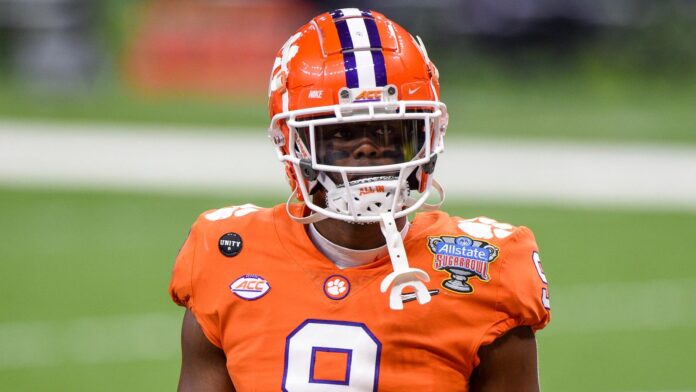 Jags coach Urban Meyer on using Etienne at WR: “That’s the reason we drafted him is the opportunity to be a dual-threat guy and our history as long as we’ve had a guy like that and we saw him as a guy like that in the draft this year.”

The Jacksonville Jaguars made a somewhat mysterious selection by picking Clemson running back Travis Etienne in the first round of the 2021 NFL Draft.

The team already had a strong No 1 running back in James Robinson and had signed dependable veteran Carlos Hyde in free agency.

On Saturday, first-year Jaguars coach Urban Meyer provided a pretty big clue. Meyer is using Etienne as a wide receiver at this weekend’s rookie minicamp, forming a pass-catch combo with Etienne’s college quarterback – and the No 1 overall pick – Trevor Lawrence.

To the @Jaguars at No. 25: Travis Etienne, RB, Clemson@swaggy_t1 | @ClemsonFB

“That’s the reason we drafted him is the opportunity to be a dual-threat guy and our history as long as we’ve had a guy like that and we saw him as a guy like that in the draft this year,” Meyer said on a conference call Saturday.

“Like I said, worst-case scenario is you have a running back that’s elite with receiver skills and best-case scenario he’s a legitimate dual-threat guy. Etienne, the 25th overall pick, is up for the challenge.

“I feel like I create a problem outside for a linebacker, so I feel like football is a game of match-ups. We’re just trying to get the best match-ups for us to go out there and make plays and do what’s best for the team,” Etienne said to CBS Sports.

The making of Trevor Lawrence

From ‘naked wild man’ to ‘ego-less superstar’. Those close to Trevor Lawrence’s ascent provide insight on the generational talent behind-the-scenes.

“I feel like if I really hone in on my skills and just keep working at it, work on my route running ability and really focus in on what the plan is and buy into that, we’ll make plays, we’re playmakers. I feel like, like I said, football is a game of match-ups, and this creates the best match-ups for us.”

Robinson starred after going undrafted in 2020, finishing his rookie campaign with 1,070 rushing yards for seven touchdowns from 240 carries, while also logging 49 catches for 344 yards and three scores.

The Jags had meanwhile been expected to increase the workload of second-year receiver Laviska Shenault, who had 58 receptions for 600 yards and five touchdowns in his rookie campaign after being drafted in the second round.