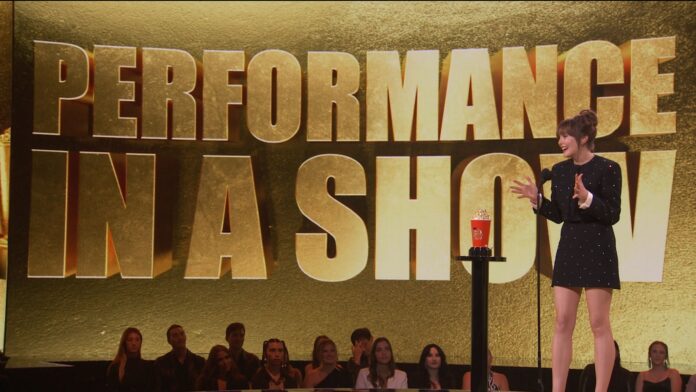 Marvel dominated the MTV Movie & TV Awards on Sunday, as Sacha Baron Cohen walked off with the comedic genius prize.

The awards, which are entirely voted for by fans, took place in Los Angeles on Sunday night and had an in-person and virtual audience after taking a year off as a result of the pandemic.

Marvel‘s first TV series WandaVision won best TV show, while Elizabeth Olsen won the award for best performance in a show for her role in the series as the Wanda Maximoff herself.

Fan favourite Kathryn Hahn also picked up a golden popcorn trophy for WandaVision, after being voted best villain for her performance as Agatha Harkness.

Olsen and Hahn also picked up the best fight award, making them both double winners at the ceremony.

Elsewhere for the superhero franchise, Marvel’s Captain America spin-off The Falcon And The Winter Soldier picked up two awards.

Anthony Mackie, who is the first black Captain America, won best hero, as well as also picking up best duo alongside his co-star Sebastian Stan.

While picking up his best hero award, Mackie praised his castmates and described the last year as “a very traumatic experience”.

He added: “But we’ve got through it and we’re stronger for it.”

But the Marvel awards did not stop there, with Black Widow actress Scarlet Johansson taking home the generation award, before being covered in green slime by her husband.

Being slimed is seen as an honour at the annual Nickelodeon awards – with husband Colin Jost jokingly mixing up his award shows.

Not only does she play an original Avenger, but she is also known for roles in Marriage Story, Jojo Rabbit and Lost In Translation.

Black Panther actor, the late Chadwick Boseman, won best performance in a movie at the awards, for his turn in Ma Rainey’s Black Bottom.

He was widely expected to win the best actor award at the Oscars for that role, but it instead went to Anthony Hopkins.

Sacha Baron Cohen also made an appearance at the show to accept the comedic genius awards.

He appeared as himself alongside some of his comic creations, including Ali G, Borat, Bruno and General Aladeen – poking fun at the outdated nature of the characters.

“And awards like this, voted for by you, let us know that you took those stories close to your hearts.”

Lin-Manuel Miranda, Mandy Moore, Henry Golding and the film To All The Boys: Always And Forever were also honoured at the awards.

From Lady Gaga to Maroon 5, here are some of the artists touring this summer