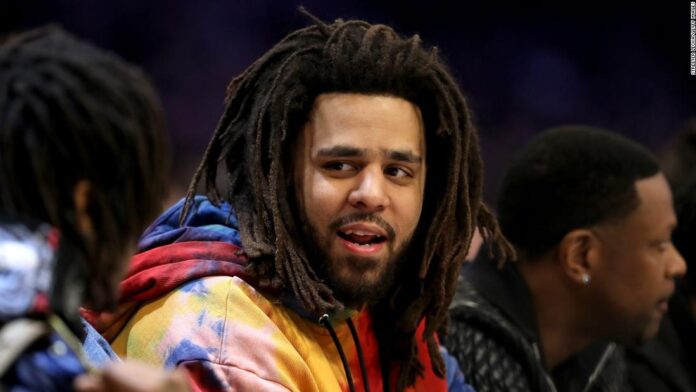 Cole’s first points for the Patriots Basketball Club in Rwanda were filmed and tweeted by the league Sunday. He signed with the team last week, according to ESPN.
“Jermaine Cole follow-up for his first points for @PatriotsBBC” the league tweeted.
Cole himself also joked about playing in Rwanda by posting a meme on his Instagram with the caption: “Me in Rwanda trying to remember these plays.”
Cole played basketball in high school and was a walk-on at St. John’s University in Queens, New York, before turning his focus to music, according to ESPN.
He also spoke about basketball in the YouTube short “Applying Pressure: The Off-Season Documentary” and how he realized he needed to approach his music like he had once approached basketball: by putting in the work. He came to this realization when his friends had an informal intervention for him during the early part of his career.
“After that, I thought about basketball and why I ain’t make it in basketball,” Cole admitted.
He added that he loved to play, but by the time he was around 22, he realized that he didn’t make it because he didn’t put in the work to improve his on-the-court skills.
Cole said in the video he didn’t want to look back 20 years down the road and think “the reason you didn’t make it in music was because you didn’t put in the work.”
Later in the video, Cole says, he realized that being better in music was like getting better in a sport.
“When I really, really fell in love with rap, it was a matter of like sport. I started realizing the parallels between rapping for me and basketball,” Cole said. “I gotta operate at a high skill level and the only way you’re going to operate at a high skill level is putting in the hours.”