Home World One dead, 3 injured in a Toronto shooting 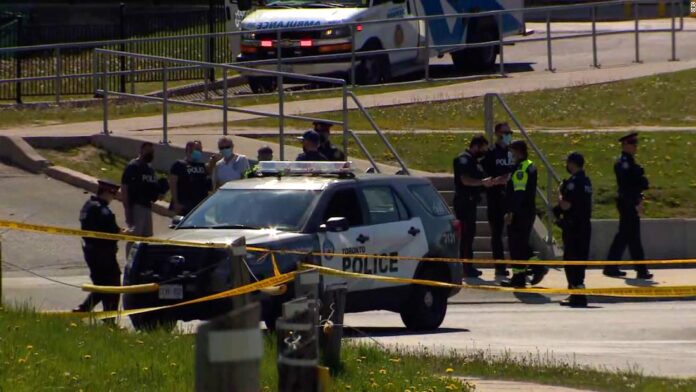 Witnesses in Etobicoke said they saw a man get out of his vehicle and begin shooting at the intersection of Willowridge Road and Eglinton Avenue West around 2:30 p.m. ET, police said on Twitter. The man was seen shooting into another vehicle.
One person is in life-threatening condition and two other victims have non-life threatening injuries. All four victims are adult males, according to police.
Police initially reported there were five shooting victims, one of whom died. They later revised the number and said there were four victims, one of whom died.
About 100 shots were fired during the incident, according to CNN news partner CTV. The man who was killed was 28 and the other three men are in their late 20s and early 30s, CTV reported.
Officers were searching for other victims after finding bullet holes in nearby buildings, Toronto police said.
The suspect fled in a black car, police said, adding the incident is still under investigation.
Correction: The number of injured has been revised downward to three after Toronto Police updated the figure.

‘So… how ya been?’: Stephen Colbert welcomes an audience back to ‘The Late Show’

Lost painting by David Bowie, purchased for $5 at a landfill, could sell for thousands

The woman who spent lockdown alone in the Arctic

The exotic island paradise off the coast of England