Home Sport Saints make it six of the best 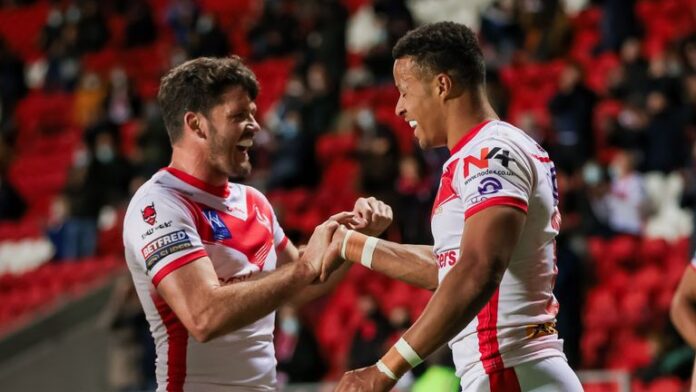 Tries from Alex Walmsley, Theo Fages, Kevin Naiqama, Louie McCarthy-Scarsbrook and Regan Grace secured victory for the home side, who paraded the Super League trophy to the fans in attendance prior to kick-off

Super League champions St Helens treated their returning fans to a sixth win from as many games as they eased to a 28-0 triumph over Salford Red Devils.

Saints opened the doors of the Totally Wicked Stadium for the first time for more than 14 months and tested the patience of their 4,000 socially-distanced season-ticket holders before the break before giving them plenty to cheer with four second-half tries.

The fans got a first sight of the Super League trophy, six months after the Grand Final, when injured winger Tommy Makinson performed a solo parade before kick-off and they will probably get to see it again come October – but coach Kristian Woolf will hope to see his side overcome their slow starts to matches.

However, there was nothing wrong with the champions’ defence as they produced their second clean sheet of the season so far to maintain their lead at the top of the table.

“Having the fans back was outstanding,” Woolf said. “Hearing the reception when the players ran out for their warm-up and seeing all the smiles on their faces made the hairs stand up on your back.

“Also the terraces singing the songs, it was outstanding to have that back – to actually hear it and feel it reminds us of how much we missed it.

“It was great seeing people walk across the bridge and into the ground and it was great that we could put a good performance on for them.”

It was great seeing people walk across the bridge and into the ground and it was great that we could put a good performance on for them.

Scrum-half Theo Fages, the out-of-contract French international who looks increasingly likely to leave the club at the end of the season, was the key man as Saints completed the double over Salford following their opening-day win over Richard Marshall’s men, who are struggling near the foot of the table with just one win from their first six matches.

The Red Devils lost hooker Andy Ackers with a head injury after just two minutes but Chris Atkin took his place and ran the show as the visitors enjoyed lots of early possession.

Stand-off Tui Lolohea was close to touching down a kick from his half-back partner Kevin Brown and centre Kallum Watkins dropped the ball over the line.

At the other end, young Jack Welsby, further displaying his remarkable versatility by impressing at centre, got to the line only to be turned onto his back before prop Alex Walmsley finally broke the deadlock, ploughing his way through the Red Devils’ defence for a trademark solo try on 23 minutes.

Lachlan Coote added the goal but that was the extent of the scoring before half-time.

Saints, who had loose forward Morgan Knowles making his first appearance of the season, suffered a setback when stand-off Jonny Lomax went off for a head injury assessment on 27 minutes but his replacement Aaron Smith made a lively contribution, being held up over the line and having a try ruled out for a double movement.

Lomax was back for the start of the second half and Saints quickly doubled their lead as Fages started an attacking move inside his own half by collecting a kick from Salford winger Ken Sio and finished it after Coote and Welsby had kept it going.

The champions always looked the more likely scorers and they duly made sure of the points on 58 minutes when right winger Kevin Naiqama took Coote’s sharp pass to produce a flying finish at the corner for their third try, after setting up the position with an interception on his own line.

Growing in confidence, Saints piled on the agony for their visitors with two further tries in the last 13 minutes through prop Louie McCarthy-Scarsbrook and winger Regan Grace, with Coote taking his goal tally to four from five attempts.

“We couldn’t compete with the speed and accuracy of St Helens,” Marshall, who was Woolf’s assistant for Saints’ Grand Final triumph last year, said. “They will do that to a lot of teams.

“They played the field position really well and strangled us. They’re a very hard team to defend against and obviously our attack wasn’t on today.

“Kristian has just presented me with a ring from the Grand Final which is a really nice touch by the club, but I would swap it for a win right now.”