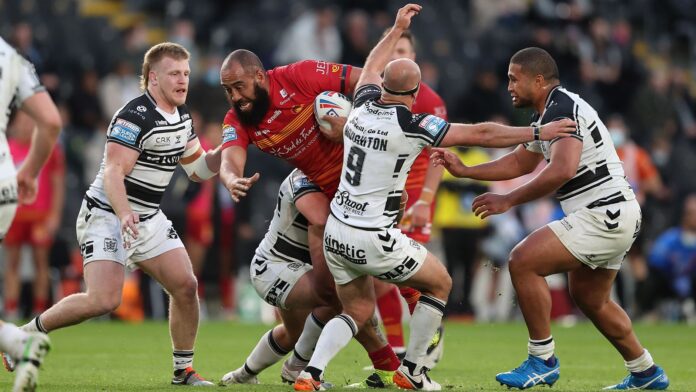 Hull FC tasted defeat in front of their returning fans after a 27-10 loss at the hands of fellow top-four hopefuls Catalans Dragons at the KCOM Stadium.

Supporters were permitted back into stadia – albeit in limited numbers – as part of the Government’s road map to easing coronavirus restrictions.

A penalty apiece from James Maloney and Arthur Mourgue sandwiched a Mahe Fonua try in a first half that saw both sides reduced to 12 players.

Maloney and home centre Carlos Tuimavave were sin-binned for professional fouls as the scores were locked at 4-4 at the break before Josh Reynolds put the hosts back ahead with their first attack of the second half.

But tries from Sam Kasiano, Mike McMeeken and two from Tom Davies, in addition to Maloney’s drop-goal, saw Steve McNamara’s side claim their fifth Super League win of the season.

“That was an extremely tough game,” Dragons head coach McNamara said. “We managed to get the ascendancy at the right time and made them pay.

“In general, I was really, really pleased. I thought it was a really resilient performance. We knew we had to come here and play extremely well to win.”

In general, I was really, really pleased. I thought it was a really resilient performance. We knew we had to come here and play extremely well to win.

It had been 431 days since Hull last played a home game with fans in attendance, although that match saw head coach Lee Radford get sacked immediately after a 38-4 loss to Warrington.

The roars of ‘Old Faithful’ and ‘Come on, you Hull’ echoed around the stadium as the 5,527 supporters who were lucky enough to get tickets made their voices heard.

The home support applauded the first penalty decision which went in the Black and Whites’ favour, but were silenced in the fourth minute when Maloney slotted over a routine kick.

Hull fans were vocal once more when Maloney was shown a yellow card in the 13th minute and the hosts made the numerical advantage count.

Not the result we were hoping for this evening, but an unbelievable feeling to welcome back our loyal members to the KCOM Stadium – a huge thank you for your continued unwavering support. 👏

A sweeping move on the right saw Jake Connor arrow a pass to winger Fonua, who powered his way past opposite number Fouad Yaha for the first try of the match.

However, both sides were reduced to 12 apiece in the 21st minute when Tuimavave was sin-binned and Mourgue kicked another penalty to draw the scoreline to 4-4.

Hull were camped on Catalans’ try-line, but the French side held firm until half-time to remain on level terms despite Fonua and Adam Swift going close.

But Hull did not have to wait long to regain the lead as Reynolds finished off a fine break on the right edge inside a minute of the restart.

Tuimavave found space on the outside before finding Connor in support, who played in the Australian half-back to dot down unopposed for a 10-4 lead.

Benjamin Jullien was held up for Catalans before McNamara’s side eventually drew level in the 54th minute when Kasiano found a gap in the Hull line to slide through by the posts.

Both sides pushed to get the go-ahead score and it was the visitors who did, with McMeeken going over in the right corner with 15 minutes remaining to lead 16-10 and turn the contest on its head.

Five minutes later, Maloney added a drop-goal to make it a two-score advantage before Hull finished the game with 12 men after Chris Satae was sin-binned for a high shot on the Catalans half-back with nine minutes left.

We aren’t the finished product yet. We came up against a side that, in my opinion, are top four in the competition, and we were taught some lessons.

The French side added gloss to the scoreline as Davies ran in two late tries to seal two points and remain in touch with early leaders Wigan and St Helens.

“The players are really hurting at the moment and we need to have a response at training to make sure we go into our game next week prepared and turn around what happened,” Hull FC head coach Brett Hodgson said.

“We aren’t the finished product yet. We came up against a side that, in my opinion, are top four in the competition, and we were taught some lessons.”