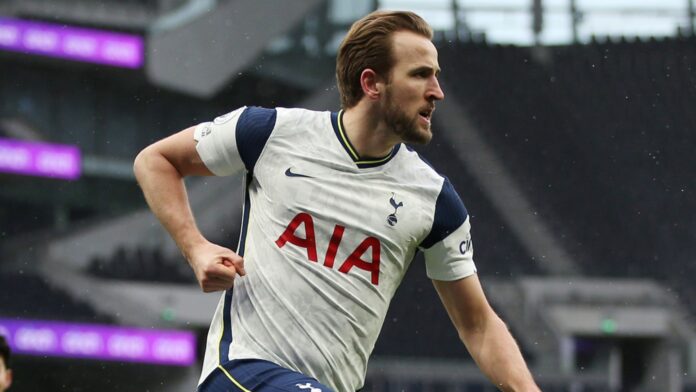 Harry Kane has again expressed his desire to leave Tottenham, but will he be allowed to go and who has the resources to pull off one of the biggest transfers in Premier League history?

After news broke on Monday that Kane had informed Spurs of his intention to leave the club this summer, his future dominated the latest edition of the Pitch to Post Review podcast, where the case for Manchester City, Manchester United and Chelsea signing the England international were discussed.

Sky Sports News reporter Dharmesh Sheth and Sky Sports features writer Adam Bate joined Jasper Taylor to examine which club would best suit Kane, who had the most realistic chance of signing him, and the impact his availability this summer could have on the future of Europe’s other in-demand striker, Erling Haaland…

Man City: The case for Champions League and trophies

While the club remain silent on any suggestion their talisman is angling for a move, a desire to challenge for silverware is likely to be at the heart of any such decision.

“Every club would want Kane; he’d get plenty minutes at every club in the world. Manchester City fans may say they like Riyad Mahrez, Phil Foden and Kevin de Bruyne at the moment, but you can easily envisage him in a role at City, United, Chelsea or Liverpool.

“If you think of who he should join, you have to go back to the question of why he would leave Tottenham: to play in the Champions League and win trophies. The team most likely to do that is Manchester City.

“They are the champions; they have finished in the top four for the last 11 seasons in a row and they are the favourites to win trophies even without Kane. If he wants to win things, I think that is the place to go.”

Sky Sports News reporter Dharmesh Sheth believes a move to the Etihad would be the most palatable to Spurs if a move abroad was not forthcoming and argues fans would struggle to begrudge Kane such a move after his service.

“It’s not an ideal scenario for Tottenham fans losing Kane, but if he was to go they would probably prefer him to go abroad to Barcelona, Real Madrid, Bayern Munich or Juventus.

“But if that wasn’t to happen, I suppose the next best scenario would be not to a London club – essentially Chelsea – and maybe to one of the Manchester clubs.

“If he was to go to Manchester City, they are going to be in for every single trophy they compete for. Tottenham fans would probably look at that and think Kane deserves that move, and if it is to be City, it’s easy to understand why.”

On the red half of Manchester, United’s acquisition of Edinson Cavani for another season and the continued development of Mason Greenwood might suggest there is less need to bring a striker to Old Trafford compared to Manchester City, who need to replace the departing Sergio Aguero.

But irrespective of Cavani and Greenwood, Adam Bate believes Kane’s attributes could be better suited to Ole Gunnar Solskjaer’s side and would make the Premier League title race a closer affair.

“I would say City would still be title favourites regardless of whether United signed Kane. Kane would be a great fit for United, when you think of the pace out wide and the potential signing of Jadon Sancho, they would have great options.

“If you were to flip the question around and ask whether the title race would be over if Kane joined City, you would probably conclude that the gap to the current champions would become so big.

“If Kane goes somewhere other than City, it will certainly make things more interesting.”

Dharmesh Sheth has questioned whether Manchester United would risk potentially stunting the growth of Mason Greenwood to bring in Kane.

“City have won the league without a recognised number nine all season, add Harry Kane to that and things look ominous for everyone else.

“The link to Manchester United is interesting because they have just signed Cavani on for another season and from the outside, that looks like they view Mason Greenwood as the long-term solution.

“I think United rate Greenwood so highly, but going into the market for someone like Kane could well stunt the development of Greenwood.”

If you look at the status of the player, the clubs involved, and the potential British record price it would take, those factors alone would make it [the biggest Premier League transfer of all time].

One of the three clubs reportedly linked with Kane are Tottenham’s fierce London rivals Chelsea.

Kane would almost certainly fit the bill at Stamford Bridge and help address the lack of presence up front which plagued Frank Lampard’s tenure and Thomas Tuchel continues to tussle with, but it’s a deal Dharmesh Sheth believes Spurs would never consider, let alone sanction.

“The three clubs we have been told have contacted Kane’s representatives – Manchester United, Manchester City and Chelsea – coincidentally, are the three clubs you would expect to be able to pull off a potential deal.

“I cannot see the Chelsea one happening at all, there is too much bad blood between the clubs both on and off the pitch, I’m not even sure both hierarchies speak to each other much.

“I would find it very unlikely that Spurs would entertain going into business with Chelsea to sell Harry Kane.”

Harry Kane or Erling Haaland? Two strikers at different stages of their careers but very much at the peak of their powers.

With the Borussia Dortmund striker’s £75m release clause coming into force in the summer of 2022, Kane’s sudden availability has left would-be suitors in a difficult position, as Adam Bate explains.

“The interesting thing for me is where Erling Haaland fits into all of this. I don’t think there are any imminent signs of Kylian Mbappe going anywhere, but you do think that Haaland is going to be on the move in the next 12 months.

“If Haaland is available, would these clubs go for Kane? This is a real decision. It’s a big risk.

“Dare you pass up on the chance to sign Kane only to miss out on Haaland? Do you sign Kane and then don’t have the funds to sign the guy who is probably going to dominate for the next six or seven years?

“Clubs may end up winning the battle by signing Kane this summer but lose the war if Kane’s legs in two years’ time aren’t where they are now.”

With Tottenham expected to demand a transfer fee in excess of £100m for Kane, Dharmesh Sheth highlights the lure and pitfalls of waiting for Haaland’s release clause to become active.

“Who wouldn’t want Harry Kane? Just look at his numbers. But the fact of the matter is who can afford him?

“Only two or three clubs are going to be able to afford to sign Kane this summer. The question is, do they risk passing up on Kane and taking the risk to sign Haaland next summer?

“It’s all well and good waiting for Haaland’s release clause to become active, but at £75m it is not going to be two or three clubs fighting for his signature. There will be a lot more clubs able to afford Haaland than are able to afford Kane this summer.

“Clubs like Manchester City might have to make a call and try to get someone like Kane in now because there is no guarantee of signing Haaland, who will be financially viable to clubs like Barcelona or Real Madrid and may choose to move somewhere else anyway.”

Tottenham: Spurs stay off the cards?

From Tottenham’s point of view, Kane’s expression to leave changes little. With no formal transfer request submitted and Kane under contract until the summer of 2024, the north London club are under no obligation to sell.

It is understood a gentlemen’s agreement between Kane and Spurs chairman Daniel Levy was struck last summer which convinced Kane to stay at the club for another season.

After the latest revelations, Dharmesh Sheth believes Spurs’ chances of convincing Kane to remain at the club for another season are slim but the striker’s contract situation leaves them in a strong negotiating position.

“All that has happened is Kane has told Tottenham he wants to leave, that’s it. Tottenham don’t have to sell him.

“In terms of Spurs being able to convince Kane to stay, I wouldn’t say ‘convince’ is the correct term. They have convinced him to stay before by all accounts, now he actually wants to go.

“‘Will he stay?’ and ‘is there a chance he will stay?’ are probably better questions. And to answer them, absolutely there is.

“Kane signed a long-term contract back in 2018 and he’s under contract until 2024, so Spurs are well within their rights to say he’s not going anywhere unless they get in excess of £120m or £150m.”

Pitch to Post Review podcast: What does the future hold for Harry Kane; the race for Europe; plus Chelsea Women’s Champions League final defeat

Jasper Taylor is joined by Dharmesh Sheth, Adam Bate and Charlotte Marsh to discuss what the future holds for Harry Kane and Tottenham; the state of play in the Premier League as we reach the business end of the race for Europe; and the fallout from Chelsea Women’s Champions League final defeat to Barcelona.

| PART ONE: Harry Kane wants to leave Tottenham. Which club is the best fit? Will Spurs sell?

| PART TWO: Alisson wonderland as the Liverpool goalkeeper’s dramatic stoppage-time winner ignites top-four challenge, plus the view from the blue half of Merseyside where Everton lose again at Goodison.

| PART THREE: Chelsea Women’s chastening defeat in the Champions League final shows progress is still to be made by Emma Hayes’ side but this season remains one of positives.