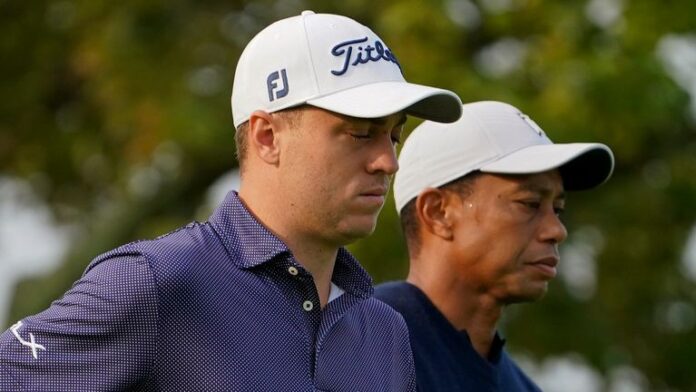 “I really don’t want to egg him (Rory McIlroy) on because usually when he wins he likes to reel some off, and with a lot of big tournaments coming up I don’t really want to poke the bear”; JT also reveals Tiger Woods advice; watch the PGA Championship live on Sky Sports Golf

Rory McIlroy has been grouped with Justin Thomas in the first two rounds of the PGA Championship – as well as Brooks Koepka – and it could be a lively threeball judging by their good-natured verbal jousting at Tuesday’s press conferences.

McIlroy was the first to face the media at Kiawah Island and the 32-year-old was asked about winning the second of his four major titles at the venue when he claimed the PGA Championship by eight shots in 2012.

“Yeah, it was huge,” replied McIlroy with a smile on his face before laughing as he added: “A lot of guys have won one major, but it’s a big hurdle to get to the second. It was good to get that monkey off my back, especially here, playing so well.

“So yeah, it was a big deal. I definitely didn’t want to be stuck on one for a long time, so happy to get that second.”

Thomas was due in next to face the media and was at the back of the room as he was ‘trolled’ by McIlroy.

The 28-year-old American, of course, only has one major victory to his name so far, winning the PGA Championship at Quail Hollow back in 2017.

However, he refused to take McIlroy’s bait when it was his turn to be questioned, only stressing that he is now wary of the Northern Irishman after he returned to winning ways after an 18-month barren spell at the Wells Fargo Championship earlier this month, also at Quail Hollow.

“I can’t really say too much, other than it’s great to see him win,” said Thomas. “I know it’s been a really long time for him, so I’m glad to see him.

“But at the same time, I really don’t want to egg him on because usually when he wins he likes to reel some off, and with a lot of big tournaments coming up I don’t really want to poke the bear.”

Thomas is one of Tiger Woods’ closest friends on the PGA Tour and after he won The Players Championship in March he revealed the 15-time major winner, who is still recovering from his car crash in February, had given him advice ahead of the final round.

Woods finished tied 11th, 11 shots behind McIlroy at Kiawah Island in 2012, and Thomas confirmed he has been in touch with the former world No 1 ahead of this event.

“I just asked him about the course,” said Thomas. “He’d be the first to say he hasn’t really played it that well, so it’s not like he’s won here, so he wouldn’t say necessarily this is the perfect or right way to play it.

“But I just asked him about the course just in terms of preparing and getting ready. He pretty much hit the nail on the head. It’s long, there’s a lot of crosswinds, and have a good short game. Bodes well at most places.”

When asked about the state of his own game as he bids for that elusive second major success, Thomas replied: “I feel really good about it, to be honest. I’ve been practising hard. It’s been close. My results have been very average, to say the least I would say, but that’s the thing about this game.

“I feel like I’ve been close but just not quite putting it together.

“But that’s the thing about this sport. You can wake up the next day and it can all be there or it can all not be. It’s a very difficult course, difficult test, and it’s really just going to be about your mental game and your patience throughout the week.”