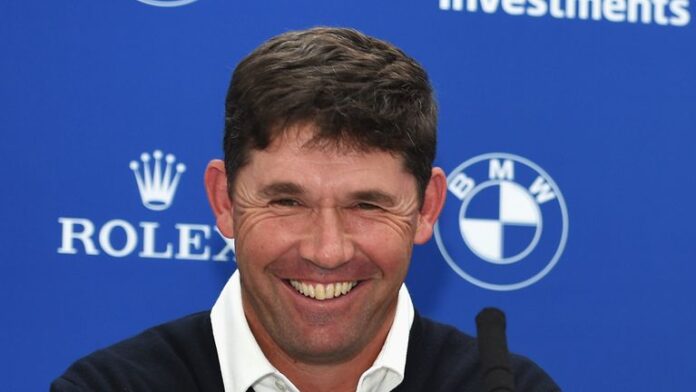 Padraig Harrington is set to play in his 21st PGA Championship this week but he admits his focus has now turned to the Ryder Cup in September.

The 49-year-old Irishman, who won the PGA Championship in 2008, admits he has come to realise the responsibility of the role and is eager to do it justice as Europe prepare to defend the trophy against the United States at Whistling Straits.

Harrington said: “The captaincy is one of those things that I suppose you generally as you’re going along before you get in the running for it, you think, ‘Oh, yeah, yeah, I want to be captain, I’d like to be captain, I’ve had a career that deserves to be captain’, that sort of stuff.

“And then the reality hits that it’s your time, it’s your turn, and in our case, the European Tour players will come to you and say, ‘Right, are you going for this?’. It’s quite a shock to take it on because, one, there’s obviously quite a personal commitment and time into it, but you don’t want to be a losing captain. You want to be a winning captain, and you’re putting a lot on the line being out there.

“I took it on because I believed I could do a good job and that I would commit and put the time and effort into it. It’s been interesting, there’s work. It’s not straightforward. I really have to thank Thomas Bjorn and Paul McGinley for the amount of work you have to do on the Ryder Cup when you come from Europe because they really did turn it into a full-time job.

“So it is a strange one. I think for us, it’s not just about who was the best player who had a great career deserves to be Ryder Cup captain, it’s about who could do the job and who’s the right man for the job, and I don’t take that lightly.”

Harrington admits his focus was on playing until The Masters, but he is now keen to fine-tune his team, with the majority of the 12-man European team pretty much settled.

“My team seems to be reasonably settled in the top nine positions, and it kind of looks like most guys are playing to impress me,” he said.

“I’ve changed a little bit, especially kind of the Masters time was a watershed. I played golf up to that and it was awkward to kind of do things, but since then I see myself spending more time with the players at different stages and trying to take a little bit more time out of my day, like I played a nine-hole practice round on Sunday with Tommy (Fleetwood) and things like that.

“Just trying to be around the guys a bit more and maybe stepping out from what I’m doing. Normally at a tournament, I’m a busy person, keep my head down, do my work, but I’m trying to make that effort to step out from that and just spend a bit more time.

“I’m definitely not as focused on my own golf as I would have been pre-Masters. I’m more focused if anything on the Ryder Cup now.”

Harrington also revealed he will be announcing another of his Ryder Cup vice-captains in the near future. He already has Luke Donald and Robert Karlsson on board as vice-captains ahead of the rescheduled tournament from September 24-26.

The Irishman acknowledges he needs more assistance, though, with further announcements coming up.

However, Harrington insists he will be careful and not let any names slip out unintentionally as he did with Donald last year.

“I have a fair idea, obviously, who I want,” said Harrington. “I must admit I’ve just mentioned at the European Tour that I will be looking to announce my next one very soon. I haven’t told him that. I have to give him the news – most of my vice-captains are players, and players who potentially could have made the team.

“So telling a vice-captain that we’re going to announce him is kind of not great news in some ways for that person. But look, I actually need more vice-captains. Myself, Luke, and Robert have a Zoom meeting next Monday, and I was just sitting there looking at it and saying, It’s time that the other guys get on board.

“And we kind of need more vice-captains at this stage, so yes, I will endeavour to announce another one and maybe not make a slip-up and announce it unintentionally, but I will be doing that pretty soon.”

“Keeping Up With the Kardashians’ reunion: What we learned from Part...

Iranians vote in an all but decided presidential election