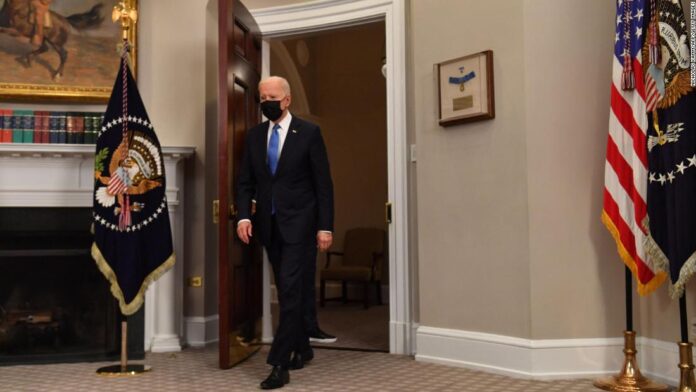 The violence between Israel and the militant Palestinian group Hamas is the latest crisis that failed to distract Biden from what he sees as his core task — ending the pandemic and rescuing the economy.
Biden declined Monday to publicly condemn Israeli Prime Minister Benjamin Netanyahu’s Gaza raids in reprisal for Hamas’ rocket attacks, a move consistent with a record of strong support for Israel that is longer than that of many previous presidents.
Domestic and international heat for Biden is escalating, however, amid rising Palestinian civilian casualties — including the deaths of children in Gaza — and the Israeli destruction of a building in the enclave used by the Associated Press and other media groups.
Other presidents might have felt the need to appear on camera to call for calm or to at least offer public condolences for the deaths of civilians. Some administrations would have launched a Middle East peace shuttle by now. But in a region where the “peace process” long ago expired — a region with complications that Biden had hoped to avoid, if possible — there’s no easy payoff for spending limited US political or diplomatic capital.
“We’ve made clear that we are prepared to lend our support and good offices to the parties should they seek a ceasefire,” Secretary of State Antony Blinken said in Denmark, in remarks emblematic of a low wattage US diplomatic push and reluctance to urge Israel to stop before it is ready.
Biden’s only public event on Monday focused on the pandemic response and expanding vaccine deliveries abroad. The White House stagecraft sent a clear and obvious message about the Middle East.
“I think the President frankly wants this thing to go away,” said former Middle East peace negotiator and CNN Global Affairs analyst Aaron David Miller.
“He is shackled with the greatest challenge of national recovery since Franklin Roosevelt. He is picking his foreign policy spots carefully.”
Biden’s undiminished focus on the pandemic, and the clear desire to keep his public appearances limited to the matter at hand, recalls his refusal to be drawn into a narrative of crisis as thousands of child migrants poured over the border during his first 100 days in office and set conservative media on fire. Biden has also kept his eye on refashioning the economy to help workers rather than running down a liberal wish list that includes expanding the Supreme Court.

Characteristically, Biden kept his work on the conflict on Monday private, speaking to Netanyahu over the phone while Blinken made multiple calls to regional foreign ministers. Egypt, a key interlocutor with Hamas, is a key target of US diplomacy.
Biden told reporters he’d talk about the chat with the Israeli leader afterward but his team called a travel photo lid (meaning there would be no further public events for Biden on Monday) at 1:48 p.m. ET, before the conversation took place.
A statement about the call released by the White House caused a flurry of attention with a line saying that “the President expressed his support for a ceasefire.”
The comment did send a subtle signal that Biden’s patience is not infinite with Netanyahu, who has indicated he is not yet ready to halt operations against Hamas’ facilities and underground tunnels. Yet it also lacked a time frame by which point the political collateral damage on the President will become a hinderance to his support. In a region as treacherous as the Middle East, coded messages in an unsigned White House news release rarely move the needle. The statement and recent blind quotes from nameless officials about rising “concern” came across more as spin to relieve pressure on Biden from left-wing Democrats as a real attempt to change the dynamics of a violent confrontation.

‘Too many lives have been lost’

But criticism of Israel is rising — at least within Biden’s own party.
Senate Majority Leader Chuck Schumer, a New York Democrat who has strong pro-Israeli credentials and underscored its right to defend itself, offered a striking call for a ceasefire.
“I want to see a ceasefire reach quickly and mourn the loss of life,” Schumer told reporters, saying he agreed with a statement from Democratic Sen. Chris Murphy of Connecticut and GOP Sen. Todd Young of Indiana that stated, “As a result of Hamas’ rocket attacks and Israel’s response, both sides must recognize that too many lives have been lost and must not escalate the conflict further.”
Those comments may reflect pressure on Schumer himself from within the Democratic Party, not least from fellow New Yorker Rep Alexandria Ocasio-Cortez, who has been scathing of Israel, which she called an “apartheid” state.
Another senior Democrat, Senate Armed Services Committee Chairman Jack Reed, is one of 28 senators in the President’s party to publicly call on Biden to secure a ceasefire.
“Hamas is a terrorist group. They operate under the principle of terror. And Israel, as a nation-state, has a higher burden of proof to show that these are necessary military raids,” Reed told CNN’s Jake Tapper.
The Democratic opposition is more a danger sign to Israel than Biden, as it threatens to weaken the Israelis’ position on Capitol Hill. Several prominent Democrats are, for instance, calling for the administration to attach conditions to a $735 million shipment of precision-guided weaponry for Israel, a package that is currently on a fast-track approval process through Congress.
Israel’s operation is causing further stress in the delicate balance between progressives in the Democratic Party — like Rep. Ilhan Omar of Minnesota — and older, down-the-line pro-Israel party leaders like House Speaker Nancy Pelosi of California. That will mean hard work to come for Israeli diplomats here.

Conservative media has blamed Biden for the violence, citing his efforts to revive a nuclear deal with Iran, which funds Hamas. But it’s hard to see how the President could have given Netanyahu more cover.
He has not criticized Israel over clashes between its police and Palestinians inside the compound of the Al Aqsa mosque in Jerusalem or over possible evictions of Palestinians in a neighborhood of East Jerusalem, the part of the city they see as the future capital of their prospective state. Progressives in Washington blame those incidents for setting off the tinderbox that has been building between Israelis and Palestinians for months.
In an earlier sign of Biden’s shielding of Netanyahu, two diplomats told CNN that the US blocked public statements from the United Nations Security Council on the conflict.
Even so, Senate Minority Leader Mitch McConnell, a Kentucky Republican, laid a political trap for the President should the White House harden its line against the Israelis.
“President Biden must remain strong against the growing voices within his own party that create false equivalence between terrorist aggressors and a responsible state defending itself,” McConnell said.

No upside to coming down hard on Israeli PM

Biden knows the downside of publicly feuding with Netanyahu.
President Barack Obama’s pressure on the Israeli Prime Minister, and Netanyahu’s willingness to play politics in Washington behind his back, scarred the administration in which Biden served as vice president. Given Biden’s antipathy to a Middle East peace push, there’s little reason to make an enemy of the Israeli Prime Minister.
Still, Biden’s position is not without risks. Rapidly rising civilian casualties would pose questions about why he was not more aggressive in trying to stop the fighting.
A possible upside of recent days is that Netanyahu could come out of any ceasefire agreement in Biden’s debt. How the President might choose to use such chits is unclear. Possibly he could prevail on the Israeli leader — if he can stay prime minister amid his country’s political uncertainty after yet another inconclusive election — to avoid provocations like the most controversial settlement projects.
In the event of a deal with Tehran that could see the US return to the international nuclear deal, Biden may try to ease Netanyahu’s public opposition. The Israeli Prime Minister is, however, so adamantly against the idea that Biden would soon burn off any accrued political capital.
The President’s strategy has also underscored the narrow focus of a foreign policy mostly notable for his cementing of a more adversarial posture to China. He is signaling that in the post “America First” era, there will be no return to the days when Washington invested huge efforts to broker Middle East peace deals.
The most that might be expected from this limited effort is support for a ceasefire. That in itself is a recognition that the structures that permitted US-sponsored “peace processes” and efforts to consecrate a Palestinian state no longer exist. An Israeli political move to the right and the Palestinian divide between Hamas in Gaza and aging, ineffective leaders on the West Bank mean this is a moment without promise.
In fact, the current conflict is likely to further diminish Biden’s incentives for getting involved.

Europe aims to kill gasoline and diesel cars by 2035

Rihanna is now officially a billionaire