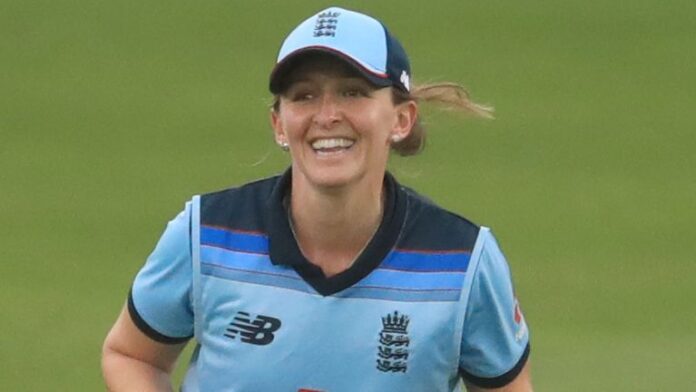 Amy Jones shattered the tournament record with a majestic unbeaten 163 as Central Sparks defeated Western Storm by 41 runs for their second straight win in the Rachael Heyhoe Flint Trophy.

Jones’ blazed 163 not out from 114 deliveries – regaining the mantle of highest score in the competition’s history from Thunder’s Emma Lamb, who had overtaken her with an innings of 121 just two days earlier. Central Sparks vs Western Storm scorecard

The England wicketkeeper-batter struck 17 fours and six sixes in the Sparks’ total of 295-7, equalling the second highest team score in the Trophy after Storm had decided to bowl at Edgbaston.

The visitors made a valiant effort to chase that target, with Lauren Parfitt (91) and Heather Knight (59) putting on 102 for the opening wicket.

Boundaries galore for the back-to-back century maker! Her 150 comes off 103 balls.

But Ria Fackrell (4-34) made inroads and, with the required run rate climbing, the Sparks restricted their opponents to 254-9 in reply.

Spinner Taylor, who was last year’s top wicket-taker, bamboozled the Stars’ top-order batters with her crafty arm-balls to restrict the home side to 137.

England batter Danni Wyatt made sure there were no nerves during the Vipers’ chase with her second half-century in as many matches, to continue her run of reaching the milestone in every Trophy match she has appeared in.

She scored 64 not out from 88 balls, with international team-mate Georgia Elwiss notching 45, as Vipers maintained their 100 per cent Trophy record – which now stretches to nine wins across two seasons.

Lightning captain Kathryn Brice was equally deadly with the ball, finishing with 4-16 from eight overs after putting the Diamonds in and reducing them to 50-6 before Jenny Gunn (40) and Alex MacDonald (39) hauled their side up to 151 all out.

But Brunt (4-23) struck with two early wickets when Lightning replied and the home side were unable to build a match-winning partnership, sliding to 109-8.

Yvonne Graves (19) and Kirstie Gordon (19) did their best to rescue the situation late on, but Beth Langston sealed the Diamonds’ success, dismissing Gordon to end Lightning’s hopes with 11 balls remaining

Georgie Boyce struck a superb 91 as Thunder recovered from their narrow opening-day defeat to overcome Sunrisers by 36 runs at Chester and register their first win of the campaign. Thunder vs Sunrisers scorecard

Boyce missed out on a century when she was trapped leg before by Grace Scrivens, but her innings, supported by 43 in 47 balls from Kate Cross, enabled Thunder to post 247-9.

AND THAT’S IT! @Sophecc19 picks up her third wicket as Castle and @Sunriserscrick’s resistance is over and she falls lbw for 13. Thunder win by 36 runs! pic.twitter.com/4MlqtxqLDg

Cross became the first instalment of a hat-trick by Sonali Patel (4-40) to finish off the innings and Sunrisers made a spirited attempt to chase down the target, built around Fran Wilson’s 45-ball knock of 50.

But when Emma Lamb bowled Wilson around her legs, Thunder pressed home the advantage and, despite resistance from the tail, Sophie Ecclestone (3-28) and Cross (3-49) dismissed the visitors for 211.